Every once in awhile, I try to use the “stash” option in Ravelry and am completely thwarted by my own laziness. I do try to input all the yarn I buy, specifically because I am crap at remembering what I have unless I can see it - one of the slight disadvantages of being highly visual, I suppose - so unless I faithfully input skeins as they come in, I am in some danger of buying the same yarn twice, simply because I like it and forgot I own it already.  But my recent (read: since September) inexcitement over photography has led me to Stash Management Laziness.*

All this to say, the EKF yarn from which I made these socks: 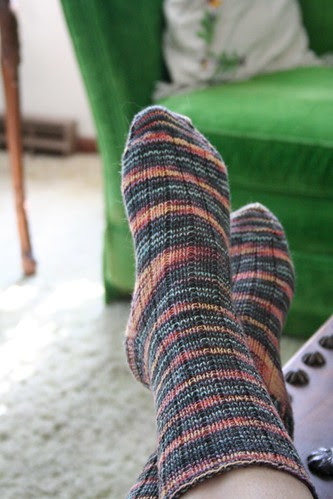 wasn’t in my Ravelry stash.  Yes, I did finish those in about 3 days; I may have mentioned that it’s quiet around here! Grandma and I have taken to laying bets on who is on the other end of the phone when it rings - THAT is how exciting it is to be here.

But small towns in the Midwest have their charms, too. The sweet lady who has been doing my Grandma’s hair for nearly 25 years has taken excellent care of her through the trauma of losing her hair. My grandma, like me and my aunt, is excessively proud of her hair. When it began falling out, she was horrified and I think that was when the full impact of Having Cancer really hit her. The side effect of her disbelief in the Big C - or one of them - was that she didn’t do what everyone said she should do and order her wig ahead of time. Thus was my poor grandma bald for a couple of weeks: 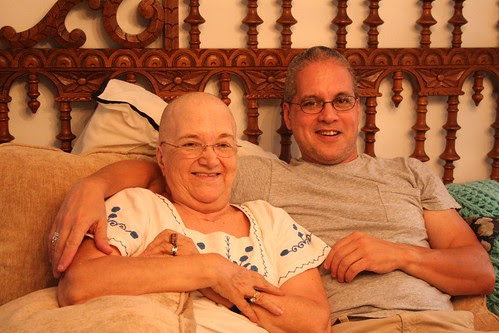 that’s her and my uncle Tony, looking more alike than either of them is comfortable with. But on Tuesday, Cathie came to the house and brought Grandma her new hair, refusing to charge her for it and cutting it to fit right in the bedroom. 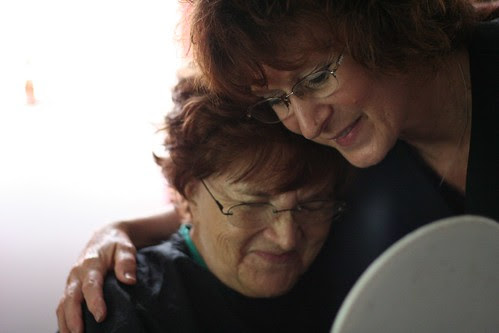 Isn’t that a sweet picture? I think I’m going to have it printed and framed for each of them.

Meanwhile, Grandma has claimed the Whammy Kiss handspun for herself and ordered a shawl “to take with [her].” I tried to explain that it wasn’t meant to be shawl yarn - it’s overspun and a little ropy even for socks! - but she will brook no argument; I gave in when she asked me why I didn't want her to wear "something I made her in the next life." Manipulation, party of me! So I started an Ishbel for her out of the handspun, and while I’m not particularly happy with the product, I’m fairly certain that she won’t really wear it until she’s being laid out (such are the “special occasions” that Spanish women talk about), and by then it won’t matter that it’s a little overspun. I know it sounds callous to say such things, but I don’t think she’s going to die any time soon. I don’t think I’ve ever met anyone more stubborn than she is!

Last night I finished my first bobbin of the CMF Be-Bop-a-Lula! I’m trying not to overdo the spinning, since it’s the marathon of the Tour de Fleece that seems to make me abjure spinning for the rest of the year. This time around, I’m simply trying to spin a little every day, and if I get in a good groove it’s just a bonus. When I get home I’m going to have to do some rearranging and some purging so that my cherry Schact will fit in my bedroom and I can continue to spin a little every day. Lord knows that if I spun for 10 minutes per day for the rest of my life, I’d barely make a dent in the magnitude of fluff in my house. Space Saver bags might make it seem more like a mere hill, but I know the mountainous truth!

So you know those socks I mentioned? Based on previous calculated sock yardage, they probably come in around 275-300 yards for the pair. In celebration thereof, I opened my box from The Loopy Ewe yesterday, introducing FAR more yarn into the stash than I knitted out of it. Somewhere around 1975 yards, to be precise - mostly of Lorna’s Laces, I know you’re shocked. Self control, why hast thou forsaken me?

Oh, that’s right. You were never mine to start with.

Tomorrow I’m going to a fiber festival with Meghan of Stitch It! We’ll have a blast, eat too much fair food, get sunburned, and probably spend too much money, which is why I’m planning to take a good look at my fiber stash on Flickr tonight. The only thing I really find myself wanting is a good monochromatic white/grey/black roving to spin up, but I also want it to be the CMF SW merino, so I may just have to dye it myself when I get home.

*Edit: as of uploading this blog, I have entered all the yarn I've bought this trip into Ravelry. It's staggering, so excuse me while I got knit now. And maybe faint.
Posted by Anonymous at 12:16 PM