It’s been over a month!  And what a month. Last most of you heard, I was heading off to Joliet, Illinois, for my dear cousin Valerie’s wedding, completed shawl in hand. The wedding was a great deal of fun, the family was wonderful and crazy as always, and I had a lovely time with everyone.

I didn’t get a photo of Val with the finished shawl, but she assures me that it saved her life many times during her month-long honeymoon trip around the U.S. because her new husband likes the A/C absurdly high. She promises to send me an appropriately posed picture soon.

That’s kind of where the good news ends, I’m afraid. After the wedding, the immediate family was gathered in my grandmother’s Green Parlor and we were told that not only does my beloved namesake have breast cancer, but so does my grandmother. In fact, they both learned of their disease separately in late April and were waiting until after the wedding to tell everyone. I knew about my aunt, but not about Grandma, so the whole thing felt like a sick joke for a moment. And to be honest, it still does, a bit. One day I’m a part of a healthy, slightly absurd family, and the next I have to start getting yearly mammograms and start being veeeeeery careful about my health. The adjustment is a little strange, to say the least.

One of the advantages to being the slacker graduate student in the family is that I can pack up and come to Coal City, Illinois, to take care of Grandma for the summer with very little inconvenience to myself. She lives in a house with my uncle, who is very capable but nevertheless is what the family terms as “slow.” I don’t know what his official diagnosis is, but suffice to say that he’s managed to take care of Grandma and the house for all these years, but can’t be expected to do so in the face of chemotherapy, multiple doctor’s visits per week, and the abundance of care that an 84-year-old woman with breast cancer needs. So on the 14th of June, I packed a big suitcase, my Victoria spinning wheel, more yarn than I could possibly knit up over the summer, the cat, and my favorite quilt and headed to Illinois. 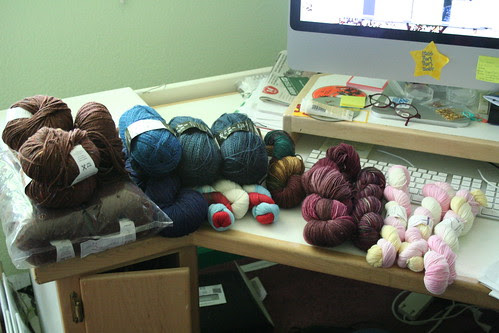 Most of the yarn I brought to IL
I’ve been here for two weeks today, and it feels like I’ve never had any other life. My room is tinier than the one in THB’s house, there is no internet in the house, and I’m trying to fit into the very specific routine that my uncle has developed in order to cope over the years. I’m within calling distance of my grandmother’s room; she sleeps a lot but I’ve been hearing beautiful stories about her youth in Ecuador and early married life when my grandfather Alejandro was a medical captain in Europe after WWII. 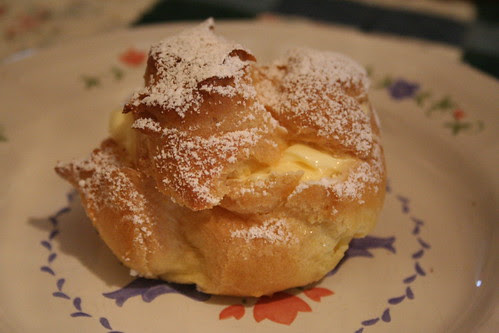 The Midwest: where elderly ladies bring
you homemade cream puffs as a treat.
My student aid for the summer came in, and I decided that there wouldn’t ever be a better time to buy a new laptop, so my Tia Marcelita and I took a trip to the Apple store and I got myself a shiny new 15” MacBook Pro. I haven’t been able to test drive it properly - meaning with video games, of course - because of the lack of internet. But it’s definitely quick, and I’ve been watching Netflix movies while I spin in the evenings after Grandma has gone to bed.  So far I’ve finished the second bobbin of the Bee Mice Elf SW merino in “Whammy Kiss” that I started oh, a million years ago. I’m hoping to have the third bobbin finished and the whole she-bang plied before the beginning of the Tour de Fleece on July 3rd, so that I can start working on the 2 pounds of lavender grey cormo I brought with me. Did I mention I carried more yarn and roving than I could possibly complete? Because I totally did.

I’ve also been working on my Faux Russian Stole, which I started ages ago. The original is in garter stitch, but I’ve changed it to a stockinette ground and I like it much better now. 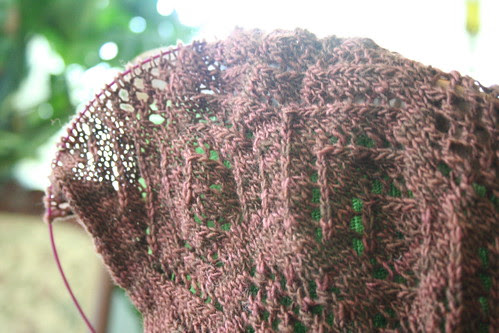 I like the FRS, and it’s keeping me entertained, but I needed something less involved for waiting rooms, so I cast on for a Seraphim Shawl out of some Australian yarn that I can’t recall the name of at the moment (this is why I need the internet!). 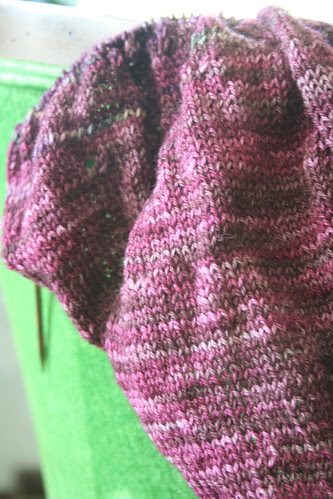 But the color is “Cherries”!
Last night I made it to the second row of eyelets; it’s about to get more complicated than simple stockinette, but I found THB’s Last Chance Socks tucked into a corner of my suitcase, so they will satisfy my need for easy projects for a bit.

Last night was also Grandma’s birthday party, and family members came from near and slightly-less-near to have dinner and celebrate. Grandma didn’t feel up to getting out of bed, so we had dinner in the dining room - or the grown-ups did and the “kids” had dinner in the kitchen - and then brought the cake to Grandma’s bedroom for her to blow out the candles. 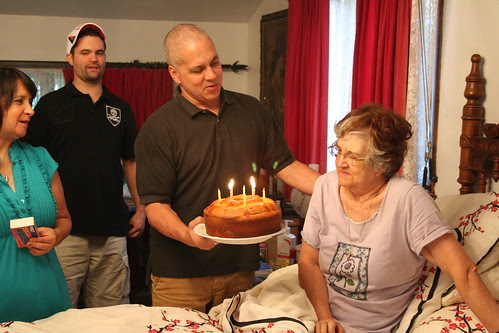 My uncle’s Rum Cake is famous in the family. Once, Val, THB and I actually got tipsy eating it because we convinced him to put a double dose of rum in. It was possibly the best dessert I’ve ever had.

So there you have it. This isn’t the summer I had planned, nor is it the summer I could have wished for, but I’m so glad to be in a position to help my grandmother and the family. I’m also grateful to be able to spend some time with her. We grew up so far away that I never really got to know most of the family here, and this chance is one that I’m enjoying very much.

Now if only I could convince myself to get up to go running every day, followed by a tanning session in the yard...
Posted by Anonymous at 12:30 PM 1 comments