I'll See Your Wagon and Raise You a Boxcar

Do you ever feel that it's somewhat useless to blog because your life is passing you by so quickly? That's how I've felt the last few weeks. So much has been going on, it's hard to know where to begin. Sometimes we have to just give ourselves permission to only catalog what we remember and let the rest slip by for another time, which is what I'm doing today. (Doesn't "give yourself permission" sound like such a new-agey thing to do? Harumph!)

First, about 2 weeks ago my Knitpicks Options needles arrived! I hearts them, and I spread the love this weekend when the Mother Ship was here; she will be getting a set, probably of the Harmony needles since she works with more slickery fibers than I do. More on that later. The bummer with the KP set is that the needles don't come smaller than a size 4. Or perhaps that's good for me, since I tend to hover right in the size 1-3 range because I am a *cough*looseknitter*cough*. One of these days I'll knit a sweater (or seven. My Ravelry queue is getting sweater-heavy for fall).

Knitpicks Options needle set, now with toast!
In a fit of excitement, I fell prey to Handpaintedyarn.com and picked up several hundred yards of their laceweight and 10 ounces of roving. For the first time ever when I opened a box of yarn, I thought the company had sent me the wrong order. I was bitterly disappointed. I have a sneaking suspiscion that the photos are doctored, but I'm not sure and wouldn't want to cast aspersions. Here are some comparison shots: 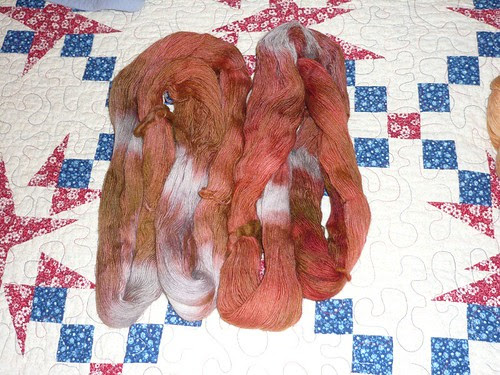 Perlas Rojas from the website: rubies and pearls _____Perlas Rojas in person: rust and smog!

The roving is closer, and the Clivia seems to have mellowed since it arrived and sat in the sun for a day, but I don't know that I'll be ordering from them again. I do like the greys in the Perlas Rojas though, so I might pick up a few skeins of the solid pearl grey - just not any time soon.

To comfort myself, I ordered a pair of the Harmony tips in size 4 from Knitpicks. Of course, I couldn't pass up the free shipping for orders over $45, so I added $38-worth of stuff to my cart. Shut up, my math is excellent! In the package will be a Jaquard starter set (hurrah!) and the Gryffindor yarn for my HP Sock Swap 2 partner, so when it arrives I will be dropping whatever I am doing and cranking out those socks. I found a pattern, thanks to Bella Knitting! Sarah, you're awesome.

Then, up until this weekend, I hardly knitted at all because of school work and projects. The Mother Ship arrived on the train on Friday and we spent a happy evening surfing Ravelry (I signed her up) and helping her transfer her newest project to a set of my new KP Options needles. You see, she had started a sideways Feather and Fan shawl out of mohair, and was trying (poor dear!) to cram 246 stitches onto a 32" Addi size 9. Those puppies were popping off all over the place! So I handed her my KP size 9's with the 60" cord attached (I knew those extra sizes would come in handy!) and helped her transfer and count all the stitches. Within about five minutes, I ordered a set of the Harmony size 9's and had them on their way to her house - clearly wooden needles are best for a mohair shawl. Good lord.

Then on Saturday, we went on an impromptu fiber crawl. First we hit Yarn Dogs where I bought enough sport weight to make a scarf I've been looking at and half of the Misti Alpaca laceweight to make the Feather and Fan Shawl from AGoL. Apparently I thought 1200 yards would be fine even though the pattern calls for 2500... wtf, memory? I'll also be taking their 4-session spinning course in October, hurrah!

Frog Tree Alpaca in sage green _______Misti Alpaca lace, but only 1300 yards! Waugh!
Then we dashed to Los Altos and went to Thai Silks, where the cutest little old Thai ladies work and coo over all the choices their customers make. One lady patted my head and told me that she used to knit when she was a bride in her country, but has forgotten in all the hundred years since. So cute! Mother Ship bought silk enough to make a skirt and top, and then we headed back out into the California dew. Our foray into the rain was cut short by the discovery that Uncommon Threads was across the street (how did I not know that?) so we went there and discovered that if I ever want to make a sweater, this would be the shop to which I would turn. The ladies there suggested Purlesence as well; I had planned to skip it in favor of my pocketbook and going on Sunday for Tea and Sympathy, but since it was on the way home... to Purlesence we went.

I need to go more often. The ladies who work there are famous for their hospitality and energy, and their fame is well-deserved. My mother managed (with the help of knitters-by) to con me into making a pair of Clessidras for her by 1) reminding me that she gave birth to me I didn't know Camille at all when I made her such fabulous socks, and 2) buying the yarn. The knitters-by reminded me that she is my mother and I have to do what she says. All of these are salient points. I acquiesced and, as a reward for being nice to my mommy, bought myself a copy of IK winter 2006 and a skein of STR Geisha, and into my Ravelry queue went another set of Clessidras (I might be crazy a little).

Geisha in Carbon, perhaps a sweater?____Maizy in Hibiscus, destined to be (more)Clessidras
Now, dear reader, I have more yarn than I know what to do with. Well - that's not strictly true. I know what to do with it. I just have to find the time! Perhaps I should get a job at a yarn store instead of as a teacher... *sigh*

This whole weekend I have successfully hidden Faina from my mother, but since she doesn't read this blog here's a sneak peek: 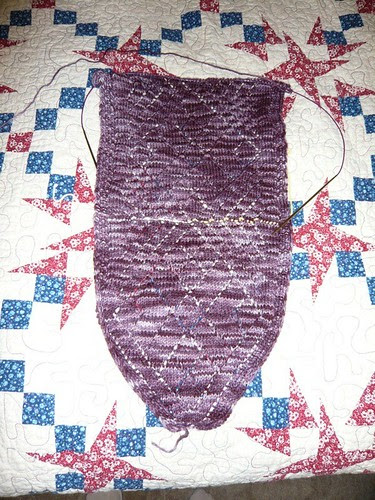 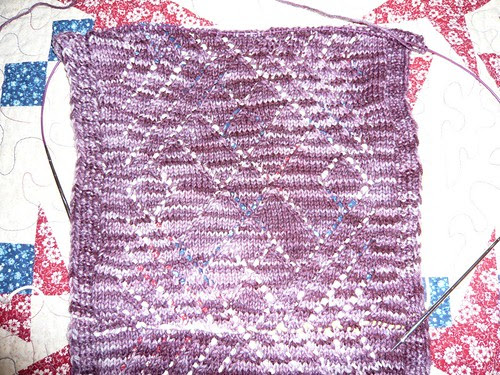 Faina: 1.75 of 4 repeats done - that's nearly 1/2 way!
Last night, I started the second half of the Super Secret S---x project, only to find out that since I put it down last time my knitting skillz have improved drastically. So instead of being more than half done, I frogged the first half and have begun afresh. I am 2 repeats away from being 25% finished; it's much quicker going this time around - a slight relief. Perhaps I should start knitting tiny test socks before I attempt new patterns!

The kittehs continue to get along better and better. Both boys sleep on my bed at least at the beginning of the nights; I'm thrilled that Darcy is taking back his spot near my feet. School is becoming a trial and my faithful, trusty Saturn is slowly dying a painful death, but I'm hoping she'll last long enough for me to switch my work schedule so that I can take public transportation to both work and school - about 5 weeks (hopefully - fingers crossed!). And now, I must go plug myself back in to Jane Eyre while I knit. It may be slower going than if I were to just read the book, but it does mean I get to knit at the same time - a fair tradeoff for possibly not getting the book 100% finished by Tuesday's class, I think!
Posted by Anonymous at 8:41 PM 1 comments

File Under: knitting, wool is not a drug

I discovered Veronik Avery's work today, which gives you two reasons to shoot me in my sleep. One, because I've been knitting for awhile now and never recognized her as a Goddamn Certifiable Genius, and two, because I will never, ever live long enough to knit all the amazingly beautiful things she creates, which will slowly tear at me from the inside out. Damn you, Ravelry!

Is there an acronym for accumulating so much Ravelry queue that you'll never get to it all? Something like SABLE, but PABLE doesn't sound right. AHH! I've got it; we'll call it KEELS: Knitting Exceeds Expected Life Span.

P.S. - Brie Ellen, this is all your fault. You and your stupid queue! We can transfer the blame to Kai if you like - he's hearty; he can stand it.

P.S.S. - I'm Tikabelle on Ravelry, for any who want to be my friend. Anyone? Bueller?
Posted by Anonymous at 10:59 PM 1 comments

Why is it that I seem to spend all my time looking at knitting, thinking about knitting, but seem to get very little actual knitting done?
I think this has something to do with the overabundance of beautiful yarns and projects available both on Ravelry and the interwebs in general. Knitting Daily's free weekly patterns don't help either, I must say. That Quilt Wrap stole (from Folk Style but available to KD subscribers, go sign up!) looks like my darling Mother Ship, and if two of the Knitpicks Gloss colors I would use in said scarf weren't backordered until the end of October, I would be out some $45 right this moment. I'm the type of person who can get stuck in the toothpaste aisle for half an hour because I am struggling to choose the perfect item. So getting overwhelmed with the plethora of beauty on the 'net, well. Par for the course, my friends.
It's also something to do with a constant feeling that I should be doing something else - regardless of the usefulness or importance of what I'm doing at the time. Very strange, and yet reminiscent of the term I took 3 studio art classes at the same time - two from the same professor. I'm not sure why that is; I'm not overly strapped for time or cash at the moment (although I could stand to re-dedicate myself to the Yarn Diet... *cough cough*). Oh well - these things seem to work themselves out in the end.

The Senor Sancho Panza, Esquire continues to grow - soon he'll be full grown and we won't be able to call him the Wee One anymore. But in the meantime, his kittenhood is both entertaining and exhausting, especially when he wants to play in the middle of the night. Thank god he'll be grown in a year - what if he was a KID?!?

He has discovered my sock projects

And thinks the monitor is his own personal toy

But he sure is cute when he's sleeping!

Mr. Darcy is still not amused.
Posted by Anonymous at 4:45 PM 3 comments