Finally, something is finished! This is the problem with working on Big Lace: there's very little to update about! But I have been working on Lyra - it's up to row 125 of 180, and I'm just finishing up the first skein of 880 yards, putting me at 70% of the rows but only about 50% of the knitting. Whew!
The downside to Lyra is that it's a complicated, audiobook-only pattern, so it's definitely not regular travel knitting. I'm hoping, however, to have it done by the end of April to give me plenty of leeway between then and my cousin's wedding at the end of May.
In contrast, I did finish up my fourth pair of No-Purl Monkey socks. Here they are in their unblocked glory: 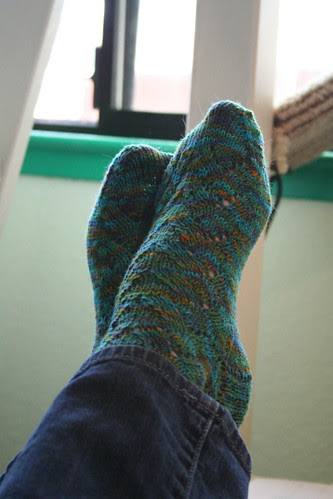 Lisa Souza Hardtwist Merino Petite, "South Pacific"
305 yds.
Just as I was weaving in the last end of sock #2, THB came home from work and demanded to know what I was up to. I proudly held out my socks, and he said, "does that mean your needles are free for MY socks?" Foolishly I replied that if he could find the yarn he claimed as his own, I would start his socks. Smartness runs in our family, dear reader, and THB promptly told me to look up which bin he had put his yarn in. So now I'm staring at two skeins of yarn with "THB!!" written on them, along with a designation for "hands" and "feet."
He'd better not lose these, is all I have to say about that!
Also, did I mention that this finished pair of socks pushes me over into Mile 2? FINALLY! Woohoo!
Posted by Anonymous at 5:07 PM 1 comments