A Failure to Comply

I’ve been doing well at saving both calories and money, but occasionally I splurge on both. These weeks in Illinois have done something to help me get out of the rut I was in while in California; I’m outside more often, eating more healthy food (and less of it, thank goodness!), and knitting/spinning regularly. I had been running - that dreaded R-word! - but I’ve fallen back on my old method of starving* my body into submission rather than having to exercise.

You may recall a few days ago when I received some ungodly number of yards of lace-weight yarn - some 4.75 miles, to be honest. I do prefer knitting with the lighter yarns, but their yardage does add up something scandalous! I didn’t think that the yardage would toss me right over the 12-Mile Barrier I made for myself, though. Frankly, I didn’t really think at all, more’s the pity, and now I’m faced with the prospect of not only completely ignoring Stash Equilibrium, but also not completing the 12-Mile Quest this year - especially given that I may (or may not) have ordered more yarn from The Loopy Ewe today (I did). I can only plead an excess of sun, and maybe a lack of food. Sure, that’s it.

I toyed with the idea of counting every pound as a free mile on my Quest total, then on my incoming total. Then I thought that maybe for every mile I run, I could give myself 100 yards of slack, to be assigned as necessary. But then I realized that if I did any of these things and succeeded in my quest, I wouldn’t feel like I’d won fair and square using the rules that I just made up. It’s supposed to be a challenge. It’s supposed to be well-nigh unpossible. I’m supposed to fail a few times - maybe a lot of times - before I succeed. Such is the nature of a Quest. And there you have it.

But there has been progress on various things! Today was a little more overcast, so I re-shot THB’s Last Chance Socks:

The yardage is still unknown, but just think how much fun it will be to weigh everything and get yardage totals when I get home! (Do you understand how quiet it is around here yet? Calculating yardage has moved from “satisfying” to “fun.”)

I’ve also been spinning - it is the Tour de Fleece, after all. I missed a day due to I can’t remember what - it couldn’t have been fatigue! - so I’ll spin tomorrow in order to make up for it. Last night I spun while watching an episode of House and thought to myself that I would probably get a lot more yarn made if I spun for more than 42 minutes/night, but like Scarlett O’Hara, I will think about it tomorrow. Back to the subject at hand! There is definitely progress on Bobbin #1: 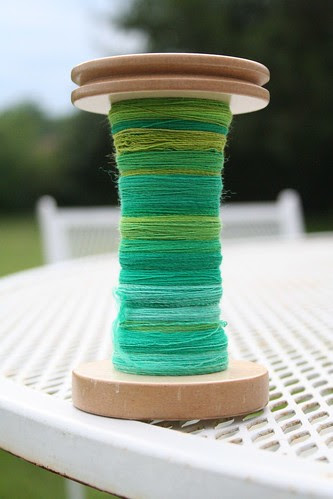 See? I told you. It’s note even one of those infintesimal flip-back-and-forth progresses, known only to spinners. That bobbin is definitely chubbier around the middle.
And since I finished THB’s socks, I’ve made progress on yet more socks - this time for me, and thus blessedly smaller: 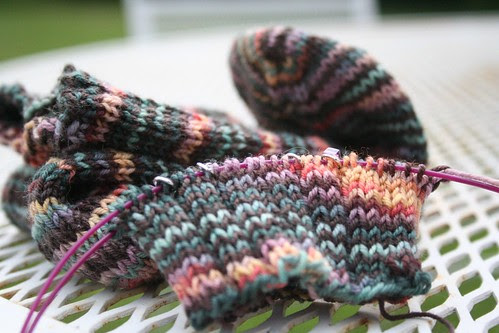 The yarn is from Enchanted Knoll Farm; it’s their Superwash Sock Yarn in “Cornucopia,” and it was in my welcome package from The Loopy Ewe. It’s also very similar in feel to the Lorna’s Laces I am so fond of, which is a huge plus. I’m trying a variation on my standard plain sock - this one is longer and involves decreases in the leg to account for calves - and I like it very much. I’ve also carefully written down the pattern so I can test it a few more times before I write it up. This one might be the one, friends. I’m sure you’re awash with antici-

My obsession with socks that take up the fewest number of yards possible has subsided, I think. I’m moving on to new and different ways to make sure that I eke every possible stitch out of my sock yarn without resorting to a sock swatch blanket. I know other people have them, and they’ve worked out well, but I am about 120% sure I would never, EVER finish one, so I’m looking for other alternatives. Striped socks have gripped my imagination at the moment, so we’ll see how far that takes us. The royal us, you understand.


*No, not actually starving. I’m at my Spanish grandmother’s house, where if you’re not chewing, you’re sick. It’s a challenge just to diet, much less starve!
Posted by Anonymous at 5:26 PM

File Under: socks, Tour de Fleece 10, you spin me