I didn't succeed in finishing 7 miles of knitting by October first. I really like lofty goals, especially because when I don't meet them I'm not overly fussed. I really, really would like to finish the 11-Mile Quest by December 31, though. For reals.

I did manage to churn out a bunch of knits, stay project-focused (mostly), and rekindle my love of spinning. I also managed to not buy any more yarn.  I made a very successful Yarn Trade with Spilly Jane in which I gave her my poor unloved Kauni and she gave me some Mad Tosh Merino Light and some Knit Picks Shadow - I'm pretty sure I won that round, but shhh! The overall yardage in was higher than the yardage out, but at least it's yards I'll actually end up knitting. My last September finished knit is my Sacred Scarf, which I cast off and sewed the ends into almost exactly as my train from the Bay Area pulled in to Sacramento yesterday evening. I'm quite pleased with it and will not be giving it away no matter who asks. Unless it's The 4 Closer, because she's effing incredible and I would bribe her with knitting to be my friend if I thought she'd let me.

I have a bunch of things with a good amount of yardage knitted into them already. My High Seas shawl has only 60 rows and the edging to be done, the Tide Pool Pi is less finished but it's been TV knitting, which has to share time with TV spinning (and you know how well that's been going! Yay!). My Rosebud Shawl hasn't seen much action, but a girl can only focus on so many things at once, right? Plus I haven't quite figured out Fleegle's no-purl garter stitch method, so there is a LOT of purling. Ick.

And then there are the bebehs. I'm going to a joint baby shower with two of my good friends on October 29th. They're besties and of course are due right around the same time, but in a fit of pique that can ONLY be aimed at me, one of them refuses to figure out the gender of her baby until it's born. I ask you, how am I supposed to knit matching baby outfits if I don't know whether or not I can make this adorable baby dress?

And then there's a wedding on December 10th in Arizona that I have to go to, and my Awful Ex will be there so naturally I need to look smashing and have something I can throw over my shoulders that exactly matches my dress and I can say, "Oh, this old thing?" Because that's how you do when you see your Awful Ex at a wedding and you're the only single people there. My secret weapons are: a Groupon for 6 weeks of CrossFit and the 2 weeks I'll be spending in Mexico in November.  And some killer shoes.*

Well, it lacks 50 minutes to October first, so I think I'll plug myself back in to Pride and Prejudice and see if I can knock some of those rows out of the High Seas shawl. I could conceivably finish it tomorrow, and then there would be pictures!

*Whether they slay him or kill me first is up for debate.
Posted by Unknown at 11:10 PM
Like So Many Things...
2011-09-30T23:10:00-07:00
Unknown
11-Mile Quest|ahhh refreshing travel|everyone loves a baby|friends are the new family|panic makes your eyes look pretty|set those needles free|
Comments

I've decided it's time to learn how to spin.

"What?" I hear you say. "Isn't that handspun in your last post?" Well, yes, it is. And I spun it, which means I know how to spin already.

What I mean is, I'd like to know that such-and-such a fiber would be best spun such-and-such a way, to be able to spin multiple thicknesses of yarn on purpose (as opposed to varying degrees of thin), to spin fluffy yarns or tight sock yarns as I choose, and to spin stuff like this for fun:


Basically, I want to be the boss of my spinning.

Now that my desires have been established, let me take you back to the very early days of my current knitting career. I learned to knit English style, with the working yarn in my right hand. In its infinite wisdom, the Internet informed me that this was not, in fact, the only way to knit! I found a video, watched it a mazillion times, cursed a lot, and learned to knit Continental, with the working yarn in my left hand. It was, to say the least, an interesting experience to take something my muscles already knew how to do and try to change it.

Learning to spin long draw is much like that experience. Here is my first attempt, rudely chain-plied and completely unstable, unstructured and not really good for anything:

Still, it's finished, and I learned something. For the next attempt I dug into my Copperpot Woolies bag and pulled out 5.1 oz of the Prairie Lady colorway. I don't really know why I bought this one, although I suspect the wool fumes may have something to do with it. The colors aren't my favorite (what gave it away?), so it was first in line to become Long Draw Experiment #2:

This one worked out better, although I still have some serious kinks to work out with the next experiment, which will happen when I come back from Portland next week.

In the mean time, I've revived a project I started back when I was still living in San Jose. I haven't done a lot of spinning since then so I have no idea why it's easier this time around, but it is. When I started spinning this Falkland from Pigeon Roof Studios, it immediately spun very fine. I've never really encountered a yarn that "wanted" to spin at a certain weight, but this one definitely does. With a very little fluffing and pre-drafting - which might account for it being easier to spin now - it wound onto the bobbin at a very satisfactory rate.
I don't have any illusions that this yarn will be finished before October; I got 2 braids as a gift from my friend Colleen that weight in at 232 grams, of which I've spun... 32 grams. It'll make a lovely addition to my spun yarn total by the end of the year, though!
Posted by Unknown at 1:40 PM
The Long Draw
2011-09-19T13:40:00-07:00
Unknown
11-Mile Quest|a goal is a wish your heart makes|you spin me|
Comments

File Under: 11-Mile Quest, a goal is a wish your heart makes, you spin me

On Monday I delved into my Box of Surprise Spinning and pulled out one of the Big Bags. What can I say? After a weekend of completed spinning projects, I was feeling cocky.
Even though I packed the bags myself, and even though I thought I had an idea of what could be in it, I still jumped up and down a little and squealed "Ooooooo! Yay!" when I opened it.

I should hide things from myself more often if I'm that easily delighted, is what I'm saying. 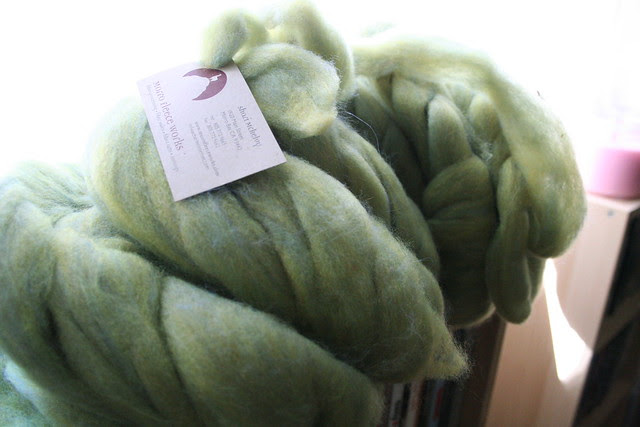 File Under: everything old is new again, wool is not a drug, you spin me

I woke up this morning convinced that my calves would be abominably sore; after all, I plied roughly 8.5 ounces of yarn last night!

I actually laid in bed and stretched experimentally for a few minutes before I realized that roller derby had given me a gift in the form of Calves of Doom (not to be confused with the Ass of Doom or the Thighs of Doom, which generally follow the Calves in short order. Oh, derby.).

When I was preparing to go to Coal City last summer I weighed out a bump of Crown Mountain Farms superwash merino fiber from my (extensive) collection. I wanted a 3-ply, so I divided it into 3 smaller bumps by weight and took it with me to Illinois, where I got through about 2 2/3 bobbins before I came back to sunny California.

The singles have sat in my Loet Victoria bag ever since, waiting patiently for their revival.

After finishing the Bright Fig yarn on Friday, I pulled out the Vic and finished up the singles on Saturday, then spent the bulk of yesterday plying on the Schact while watching the last few episodes of The Tudors on Netflix.


I wound the yarn off the bobbins this morning, soaked it, and dried it on a rack outside my back door.

One skein is a traditional 3-ply, as I had planned, and the second is a chain-ply. They are both bouncy and cheerful and the pictures don't really do justice to how green the yarn is. I was worried that it would be over-plied and kink up all over the place like the picture above, but after a soak and dry, it's perfectly balanced! Hurrah!

I'm not a huge fan of the marled look of the first skein - although it's growing on me in all the delight of LOOKIT WHAT I MADE!! - so I tried the chain-ply to see if I would like it better. I'm not certain that I do, but if looking through pictures of handspun on Ravelry has taught me anything, it's that going from fiber to yarn to finished garment can completely surprise me. Perhaps I'll knit dueling baby sweaters and see which one comes out the victor!

Next up: learning to spin long-draw with some ancient Copperpot Woolies bats from The Stash! But first, what mystery fiber does this bag contain?

File Under: 11-Mile Quest, a goal is a wish your heart makes, everything old is new again, you spin me

In Which I Make Yarn

I always have a nagging suspicion that making my own yarn is ridiculous, especially given how much commercially-spun yarn I already have. On the surface, it's a no-win situation: the fiber costs just as much as yarn that's already made, it takes for-ev-er to create, and in the end I'm left with yet another material as opposed to a finished product. 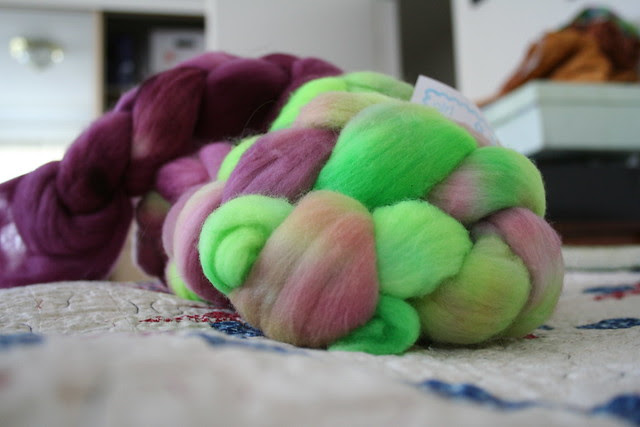 But spinning is more than that, somehow. It is meditative in a way that knitting often is not. That isn't to say that knitting is not meditative; it's just a different kind of meditation. One that recently has involved a disproportionate amount of swearing, in fact. Not being able to count tends to hinder proper knitting. 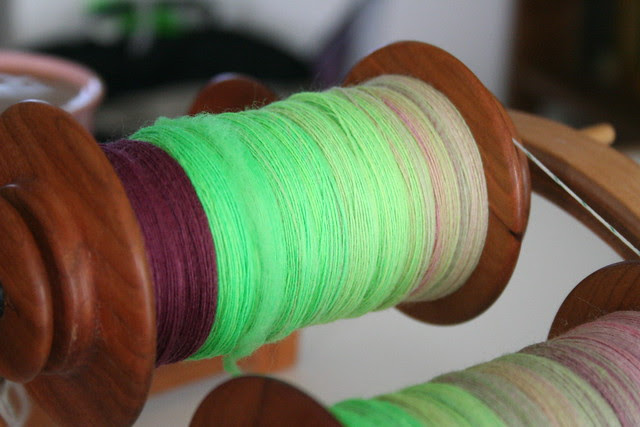 The meditation of spinning comes in the rhythm of treadling and the quiet whirr of the wheel; on my cherry wood Schact it sounds like rain and sometimes I can almost smell wet earth.

For a long time I've neglected my spinning for one reason or another. Some of those reasons are pretty small - as in less than 10 feet - but they make a difference and I'm suddenly interested again. For this project I wanted to try lining up the plies of a 2-ply to make a self-striping yarn. It's more difficult than it looks because unless your spinning is perfectly even, there's bound to be some differences in thickness.

In retrospect I probably should have done a simple, straight-up spinning project first to remind my muscles how this whole process works and to iron out my singles. That pile of wasted singles definitely took some of the meditation out of plying, even if I did have a disc of Fringe season 1 to keep me from shrieking obscenities at no one but myself.

File Under: 11-Mile Quest, a goal is a wish your heart makes, you spin me
Newer Posts Older Posts Home
Subscribe to: Posts (Atom)