Since I began spinning two and a half years ago, my fiber accumulation has vastly outpaced my handspun output. This, I understand, is not completely unusual, neither for me personally nor for the spinning world-at-large. But in keeping with my motto of “if you’re going to sin, sin boldly,” I tend to spin for a mere month out of the year, and acquire fiber rather more often than that. Said month is, of course, July during the Tour de Fleece. Once again I have joined Abby Franquemont’s Team Suck Less, <

When I packed for my summer in Coal City, I tried to think of things I would need for finishing projects: darning needles, extra cables for my Options set, several sizes of needle tips, my swift*, etc., but I deliberately left two things at home that I thought I could do without: my kitchen scale for estimating yardage, and my ball winder. Of course I quickly discovered that both of those things were, if not technically required, at least an element of Knitting Happiness and Management, respectively. I am, it seems, crap at both winding yarn by hand and estimating how much yarn a pair of men’s size 11 socks uses.

The second finished item I have should probably wait for its own post - after all, I have had precious few Finished Objects this year - but since the posts would go up at the same time anyway I’m just going to put everything all together. But first, a teaser shot: 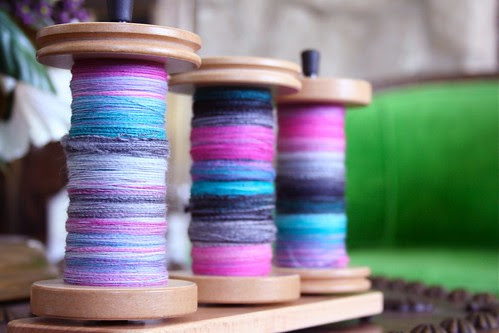 These singles were started at the first annual CogKNITive Fiber Retreat in Tehachapi, California in October 2009. I may or may not have taken any pictures of them on the wheel, but I finished the second half of bobbin #2 and most of the third bobbin over a couple of days leading up to the Tour. Then I discovered that the Lazy Kate that comes with the Victoria wheel was missing the center post (it’s removable so it fits in the bag), and I have a vague memory of it being in the bottom of my spinning basket back in California. On the 4th of July I legged it to Ace Hardware and bought two 1/4” dowels, some kite string and a package of rubber bands. Combined with a loosely woven basket I found in my room, the ingredients made up a quite functional tensioned Kate. I felt like MacGuyver.

On the 5th, I finished plying: 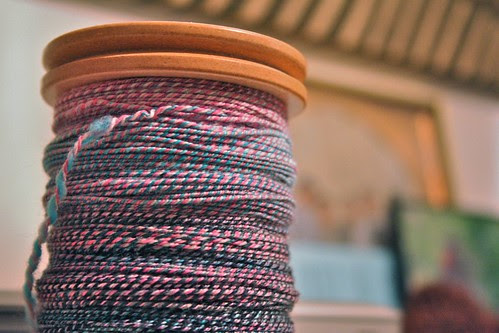 And on the 6th I had skeined, washed, and whacked it into submission. Behold, my first finished yarn since last year’s Tour was over! 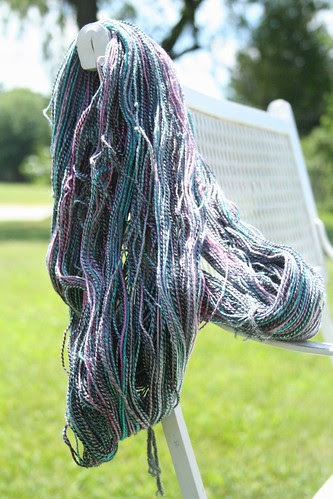 Yarn: Bee Mice Elf SW Merino “Whammy Kiss,” 335 yards
I’m quite pleased with it, especially as I wasn’t sure about the consistency between the bobbins of singles. There is probably another 20 yards of chain-plied yarn left over from after the first bobbin ran out of singles, but it’s still sitting on a bobbin waiting to be wound off into a mini-skein.

In the mean time, I started on what turns out to be my favorite Old Standby: Crown Mountain Farms Superwash Merino 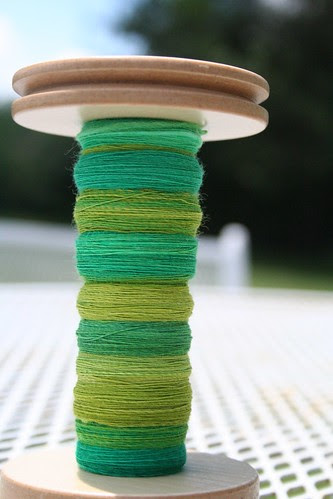