A couple of days ago, I decided it was Time. I did a sweep of the house and came up with this: 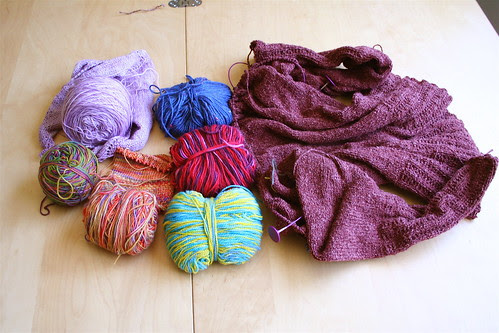 A pile of yarn and projects that - after 2 episodes of Cast-On - looked like this: 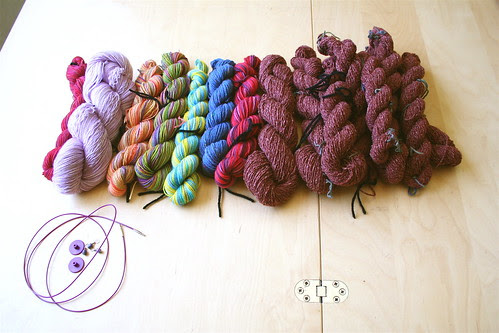 Yes, that's the yarn formerly known as a Tangled Yoke Sweater on the right. I ripped it out with only a few tears and a shot of tequila; it happens to be the only DK weight yarn I own, and I've decided to re-purpose it for something - what, I'm not sure yet.

That evening I also skeined up the remaining 6 balls of the Valley Yarns Williamstown and threw them into the dye pot along with the blue parts of my Ribbi Cardi. The yarn took the dye beautifully and I'm quite pleased. It's only a bit darker, and I didn't save any original to compare, but we've moved out of the 70's somewhat: 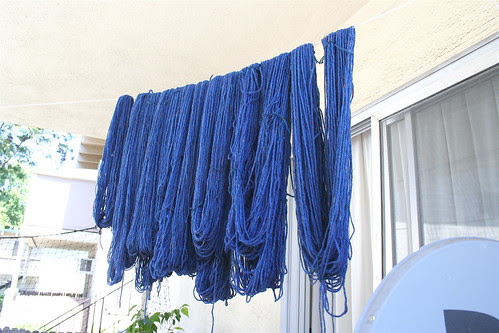 The sweater pieces went back in for an extra few shades yesterday afternoon, and I'll block them later today.

I also finished up these little booties for Mer's Bump: 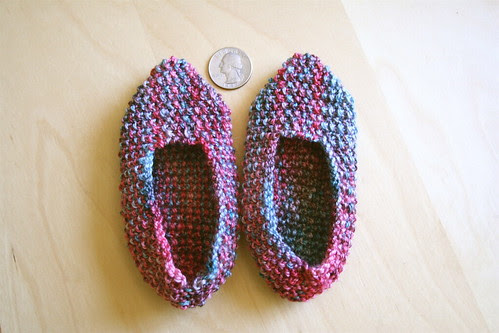 Seed Stitch Shoes, 56 yds.
"Three Dancers" merino/tencel from Zen Yarn Garden
I have been struggling with this yarn for weeks. I've ripped it out of at least 2 socks and shrieked at it throughout this tiny project, and I don't feel bad saying that I officially HATE it. I didn't particularly like the colors, and I've since learned that while the lovely Roxanne at ZYG has a great talent for dyeing, her color sense and mine don't really do the hand jive, if you know what I mean. But the colors are totally secondary - see above re. dyepot - to the handle of the yarn itself. It's held up well to the ripping, and it's got a nice sheen to it, but it feels like knitting with plastic. The stitches seem to press away from one another instead of snugging up together. There is very little bounce to it, but I'll try washing the shoes with the laundry this afternoon and see what happens. They're a bit big for a newborn anyway, so it's no loss if they felt.

I caught a glimpse of Sock Pr0n's pile-o-yarn for charity knitting yesterday, and it inspired me to begin the knitting for veterans that I planned a month ago. In just a few hours - and episodes of The West Wing - I managed to whip out this little beanie: 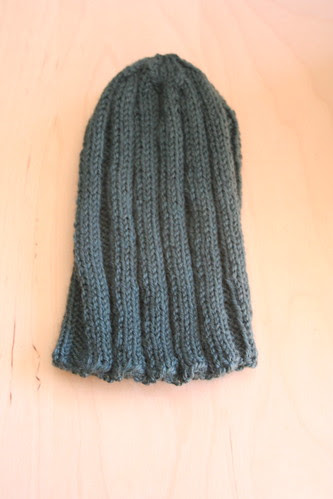 It was so fast! I've never made a hat before, and I was amazed at how quickly it went. I think there are many more of these in my future; I have a bureau full of Wool-Ease I had intended to turn into sweaters, but acrylic doesn't like my body chemistry.

And last but not least, I got some of the Pigeon Roof Studios fiber I requested! This is all pre-Social Pressure, so don't freak out. But you may, if you like, revel in the beauty of this new roving that's aaaaaaaall mine: 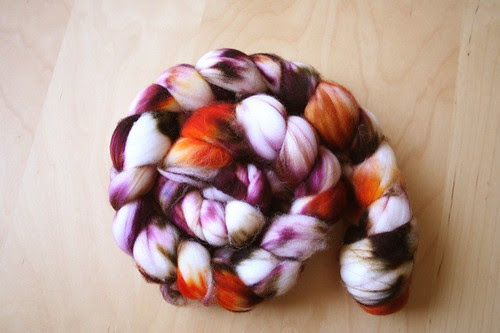 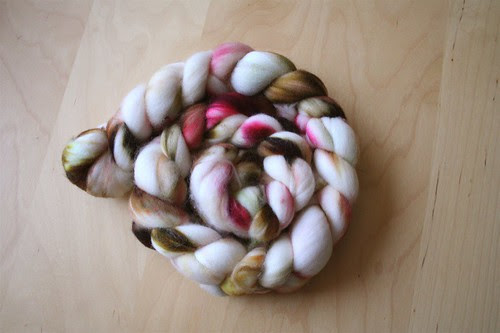 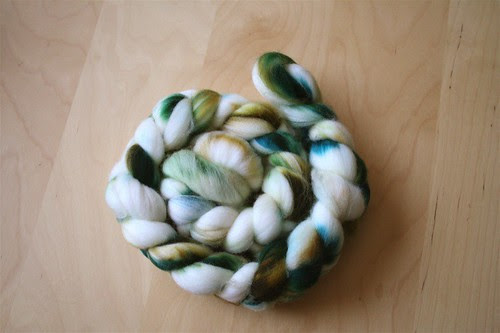 Here's a little hint for anyone wanting to grab some of this lovely, smushy, gorgeousness for their very own: Krista likes to upload in the middle of the night, and she's on Pacific Time. That's all I'm sayin'.

And for those who are counting, that's TWO finishes in one day! Hurrah!
Posted by Anonymous at 10:37 AM