Why is it that just when I've gotten settled into a break, it ends? Sigh. Someday I'll graduate from college, and then I won't feel guilty when I slack off at home. Which I'm doing right this moment, by the way. Colleges should offer a degree - or at least a class - in Advanced Procrastination; that's the only way I'd graduate with a 4.0, I'm telling you!
I spent Friday and much of last night watching season 2 of Dexter with Jasmin and the Minions. This is a huge step for me because I hadn't finished season 1; in case you hadn't noticed, I'm a bit OCD about doing things in order. I've watched roughly half of season 1, and I was totally delighted to see my friend Sam show up in episode 5. Seeing my friends on TV is always a kick, and Dexter is a delightful show. ManCandy and I are negotiating getting Showtime added to our TV lineup, but I think I'll wait until I've seen The Tudors before I make a decision. I'm the one who pays the bill, after all. During Dexter I managed to finish the Black Magic roving. I'm quite proud of it, and it's my first spinning that I'd like to knit up into something wearable. 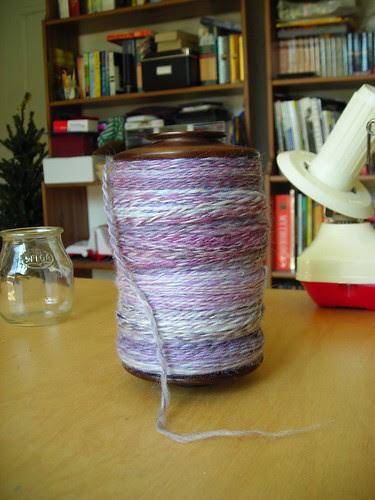 80/20 merino/tussah from Pigeonroof Studios, 383 yards
The roving seems to have gotten a little full of itself, however. It doesn't seem to want to co-star with anything else in the stash, so I'll have to see what I can dig up for this diva skein.
The weekend on The Farm was awesome. I rested and spun and knitted until I was ready to come home, and came up with some fun pictures as well. My lovely mother sewed buttons on the Egyptian Jungle Cardigan, and we promptly decided to torture Pierre: 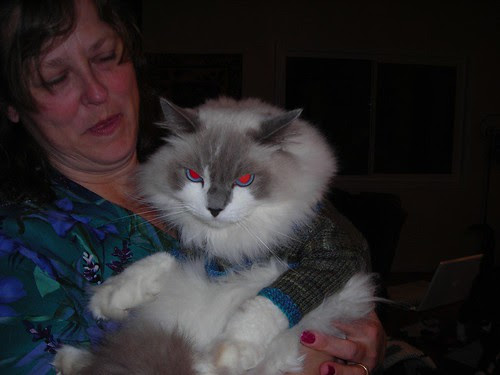 He is clearly unamused. We, on the other hand, thought we were hilarious. Maybe because of the 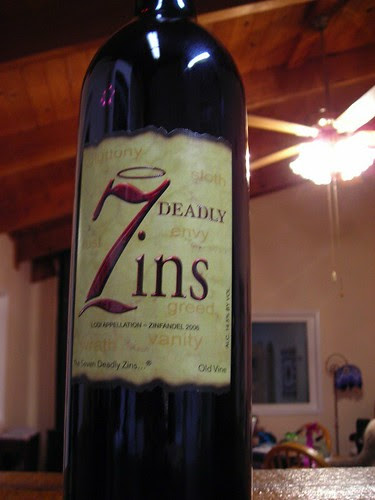 Mmm. Wine. And because I can't think of anything else to say (perhaps the procrastination is getting to me?), I'll leave you with this: 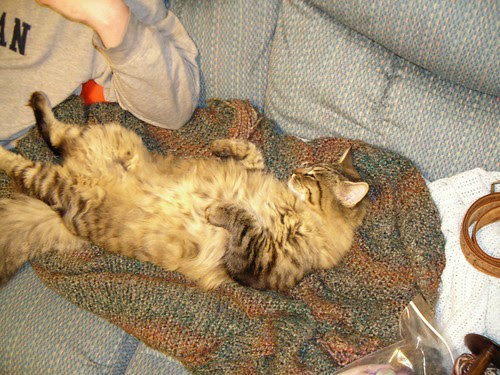 File Under: 12-Mile Quest, cats, knitting, you spin me