I finished my last (online) test today, so Spring Break has officially begun. Unfortunately for me, I let myself get so behind on papers that I'll have to work on them over the holiday. But at least as long as I keep up with my schedule I won't fall any farther behind!

I also finished the Zombie socks. Truthfully I finished them on the 19th, but I'm just getting aroudn to blogging about them today because I've been enjoying the stellar weather up at my mom's farm. Anyway, the Zombies are donedonedone! 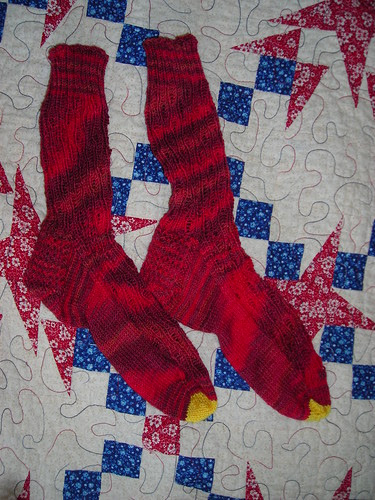 Zombie Socks - Lorna's Laces "Red Rover"
I've lost some of my knitting mojo, I think. I worked steadily on sleeve #2 of my Tangled Yoke Cardigan on the way up here, but between waiting for Round 2 of Sock Madness to begin and waiting for the yarn for my friend's wedding shawl to arrive from Colourmart, I can't bring myself to really knit much. Plus I've had a good time spinning some of the Pigeonroof Studios superwash. I brought my wheel up to show my mother and aunt - since they helped contribute birthday/Christmas money to buy it - and I've actually plowed through about 1/2 of my 4 oz of Pigeonroof's "Quietude" roving. Jasmin 2008 and I were bemoaning the fact that it's now nearly impossible to pick and choose the roving we want at PRS updates since they sell out so fast. It's great for her, and I guess it just means I'll have to put in a special order one of these days. When I have money and latitude to buy roving! 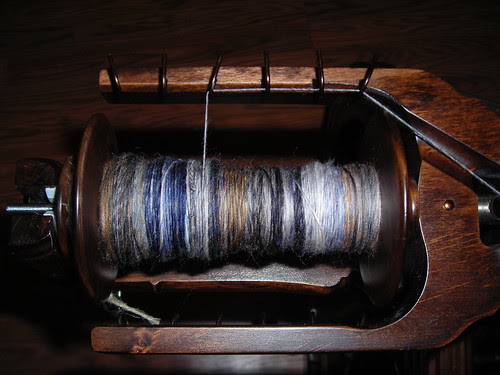 Quietude roving, Pigeonroof Studios SW Merino
That's from Friday night - I've added significantly to the bobbin since then. My mom has misplaced her kitchen scale, so I may end up just putting all 4oz on this bobbin then spinning up 4 more from another order and plying them together. This is the moment that, despite the 16oz of roving I brought with me to give myself options, I wish I'd brought more. Tough life I lead, huh??

ManCandy left for home today and I'm hoping everything is all right there. We left the Aliens alone over the weekend as usual, but I began the process of changing their diet from Iams to Royal Canin on Thursday before I recalled that I wouldn't be there all weekend to monitor them. Apparently Iams is full of terrible things and owned by a rotten company, so we're making the switch provided the kitt-os are okay. Panza will probably be fine, but Mr. Darcy is a finicky eater with a picky stomach. We're giving them RC's Maine Coon food mixed with their Special 33 for tender kitty tummies, and mixing those with the old food to ease the transition. I have to give credit to the guy at Petfood Express - when he told me about the RC food, he also gave me both full-sized bags for free so that if the kittehs didn't like it, I didn't feel obligated to use it all. And on top of that, the food is buy 3, get 1 free. Granted, it's more expensive than Iams, but if it extends the health and happiness of my boys, I'm okay with that. 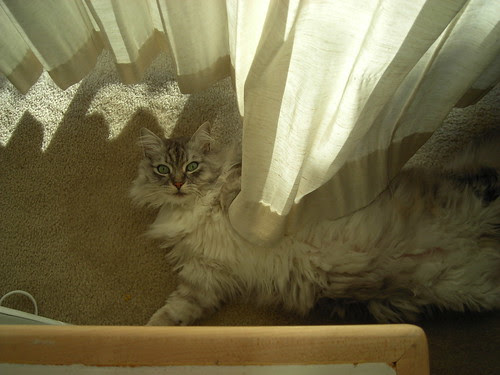 Mr. Darcy likes free kitty food too. It's almost like the food on his home planet!
Posted by Anonymous at 4:14 PM

File Under: 12-Mile Quest, cats, set those needles free, you spin me