On Thursday night, I stayed up until 2:30 am finishing my Sock Madness 2 socks. Despite the fact that I'm not super jazzed about this pattern, they turned out well. 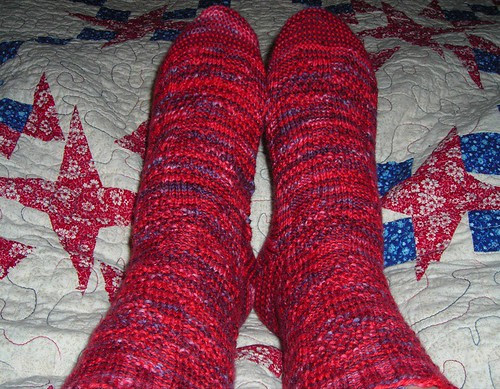 Reversai Socks, "Red Hat" colorway 347 yds.
Every once in awhile, it's good to do things you don't think you'll like. Once I got to the point where I could read the pattern in the sock itself, it went fairly quickly. Four days for a pair of socks isn't bad considering this time last year I was lucky if I could churn out a single sock every week! These will put me over the 2 mile mark on my 12-Mile Quest. Some parts of the Quest are going well and others... not so well. I've curbed my yarn buying by quite a lot; the only actual yarn I've bought since Stitches West is for a specific project, but I've definitely added to my fiber stash. Apparently I'm in a Spinning Place instead of a Knitting Place, but that's fine with me. I've been doing a fair bit of spinning in the evenings, so it will all even out eventually.

I finally got the lace yarn and beads to start Elizabeth's wedding shawl - the above-mentioned "specific project." It's this lovely shade that I've decided to call "Posset" because it looks like the wine/milk mixture Victorians used to feed their babies. 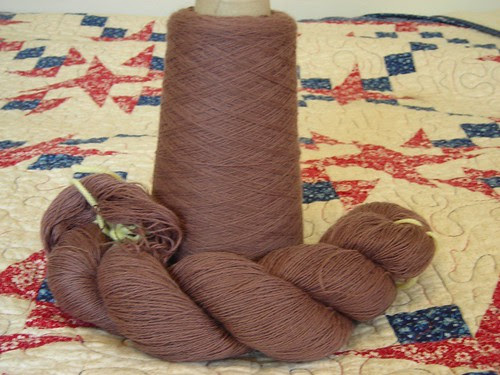 I bought 2 cones of 2300 yards each, which turned out to be a brilliant move on my part because I'll need to cable it together into a stronger yarn for hand knitting. Today I'm going to run each cone through my wheel to tighten up the original ply, then tomorrow I'll ply those two yarns together to end up with 2300 yards total. Then maybe I'll finally be able to start stringing the beads onto the yarn to begin the shawl... but I'm not holding my breath.

Yesterday I met a specter from the past. Jasmin 2007 came out to play, and we had a lovely time! First it was just an Etsy jaunt that resulted in some lovely roving from Crazy Monkey heading to us across the country, but then we decided to hit up Purlescence, where the real damage took place. We decided to split a BMFA Sheep-2-Shoe kit of Chapman Springs after seeing Nathania's lovely bobbin-in-progress at the shop, then got sucked into another S2S in Haida from the Raven series. My pictures are blurry because the little L2 doesn't like to focus on fiber, but you get the idea. 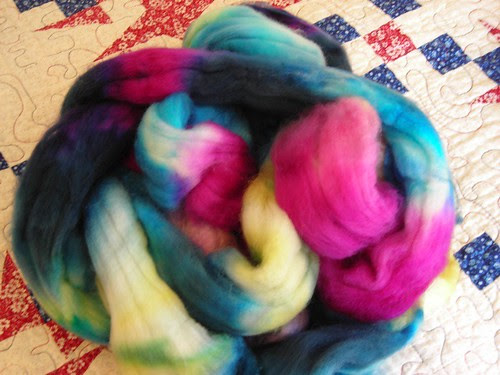 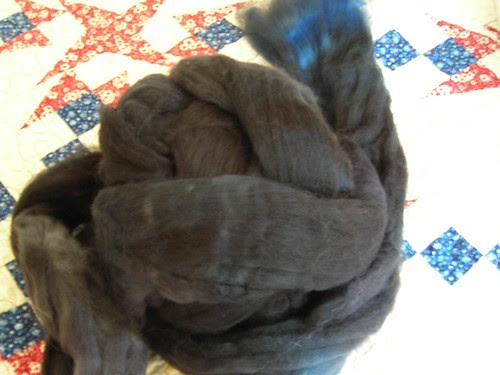 So all in all, I ended up with another pound of fiber yesterday. And it's all Jasmin's fault.

We also hit up DSW in a search for Kick-Ass Boots (as opposed to ass-kicking boots, which is another style entirely) but came up with bupkiss. Either we missed the winter boots or we were too early; only another trip will tell! However, we did find a pair of... shoes? that was squite amusing. A plain black Mary Jane style pump with a sewn-in knitted legwarmer. With cables. And there were only 2 pairs in in the aisles we looked through (sizes 7-8), which means people have bought these shoes. Multiple people. And the intention of some of them must have been to actually wear said shoes. This probably says something about the state of the fashion industry, but really I'm just too bemused by the shoe itself to pose a theory.

ManCandy is on a tear to clean the house judging by the clattering coming from the kitchen. This means I should probably go supervise before my things get relegated to Places Unknown. 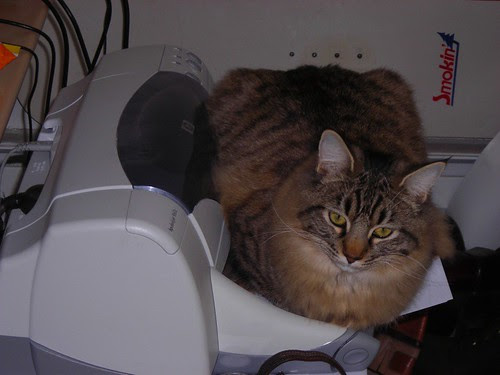 Printer Kitteh does not like ur papr. Writ a new 1.
Posted by Anonymous at 12:14 PM

File Under: 12-Mile Quest, cats, set those needles free, Sock Madness, wool is not a drug