Five weeks into this teaching thing and I've found my shine, although it's not quite as glisten-y and well-rested as I'm used to. At least I'm not falling into bed the moment I get home from classes anymore, although I did have to leave a concert at 10pm last night in order to sleep. I felt simultaneously decrepit and responsible.

This weekend marks the first Stitches West I've missed since I picked up knitting in earnest back in the fall of 2007. I don't miss the hurt I regularly put on my finances, but I do miss the feel of Stitches: running about with fellow fiber friends, seeing the wealth of color and potential surrounding me, and not needing to explain myself when I make a big deal out of wanting to make something I "could buy at a store" (not really, but what do non-knitters know? Psh.)

Instead, I'm going to be pouring beer at the first Sacred bout of the season. 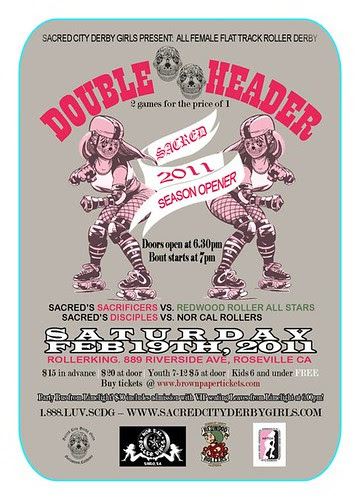 It should be fun, and I'm seriously looking forward to seeing my team play; I've never been to a Sacred bout!

As for crafty endeavors, I've been plugging along on my Aria Delicato scarf - it looks much like it did here except it's now about 2.5 feet long. I've also done my share of stash enhancing:
That's some ridiculous amount of yardage, including some of the yarn from a Christmas spree prompted by a Malabrigo bag sale and the stunning Thandie Funnel Neck sweater from IK's Winter '10 issue. Three bags of worsted weight (2200 yards each) and two of lace (4700 yards each) later, I surfaced for air and have been waiting for them to show up in the mail ever since. Here's a lesson, chiles: don't buy anything from Sumptuous Yarn Sale that you might be in a hurry for! I do like how the bags come with little air holes, though:

That colorway is "Pagoda," by the way. I also discovered The Yarn with which I will recreate my Favorite Sweater. Just in time for spring, I should add, which is not really the optimal time for cables and hooded behemoth sweaters, but should give me plenty of time to count/swatch/knit/etc. the darned thing before next winter. The yarn was inexpensive and feels like a dream:
and it's the exact charcoal color I wanted. Score.

But before I start that little project, there are a few other things in line for a February finish. First up is a Tempest Sweater out of Madelinetosh's Tosh Sock in "Molly Ringwald" pink (get it?!?) and overdyed "Oxblood:"
I'm finished with the back, the left front, and at the beginning of the right, so about 1/2 done including sleeves? The goal is to finish it before I head to Seattle to watch Sacred compete in the Wild West Showdown in the first weekend of March. Everyone else is going to be so jealous!

The other thing I'm working on is a Gatsby Vest from IK's Summer '03 issue. I haven't gotten as far with this one - which might have to do with the constant mini-cables and chart watching - and I'm pretty sure it won't be done in time for Gatsbyville on March 4th, but I can try!
The color is a bit more stormy blue-grey than this, but without natural light it's difficult to photograph. I got this yarn while on a trip to my mother's because it was on sale (natch) and it's the Crystal Palace version of Rowan's Felted Tweed. So far it seems a bit more sturdy, but otherwise there's not much difference in the feel of the two yarns; they're both a bit sticky, have a small halo, and require some finagling to work with properly. Also, they make a lovely fabric.

Most of my evenings have been spent sitting in front of sundry TV shows on Netflix Instant Watch or listening to 19th century British novels on my iPod and knitting away, so I've been fairly productive lately; good, considering the amount of yardage that just showed up at my door! I'm staying home from derby tonight to grade papers so that I can spend the next 9 days ("President's Week") in relative freedom from school, so I should probably get on that. There are currently sixty essays sitting in my inbox about what role the weather plays in chapter 7 of The Great Gatsby that are waiting for my attention. Tomorrow there will be sixty more discussing Why Gatsby Had to Die. My students hate me right now, so I must be doing my job!
Posted by Anonymous at 6:19 PM