I Drank All the Tea

Internetlings, it is DECEMBER. Did you know? The weather in California certainly doesn't, although it has been ever-so-slightly colder lately. In fact, it was a grand 36 degrees (Farenheit, natch) when I sauntered off the plane from Chicago on Monday night.

Thanksgiving with the family was lovely. My Grandmother had her final chemotherapy on Monday and managed to stay relatively upright until Friday, which meant she made it down to dinner on Thursday, for which we were all thankful. She did try to direct the Making of the Dinner from her bedroom on the other side of the house (including calling my aunt and uncle on their cell phones from upstairs), and my Uncle Frank worried all day at work that we would forget to put the turkey in the oven, but otherwise everything went swimmingly.


On Friday I took a train to Chicago

to visit two dear friends whom I have known just about an equal amount of time - give or take a few months back in 1999 - but who had never met one another. We rectified that on Michigan Avenue in the middle of Black Friday.


It was fun and we bought not a single thing (although I did veer a little toward the H&M after we passed it for the 3rd time. The display was shiny!).

Then on Saturday I took the train out to Geneva,


where Meghan and I spent a truly fabulous weekend immersed in fiber, yarn, and amazing food.


We scored a mint green polar fleece blanket for 5 bucks at the thrift store, then took it home to wash and discovered we had bought... 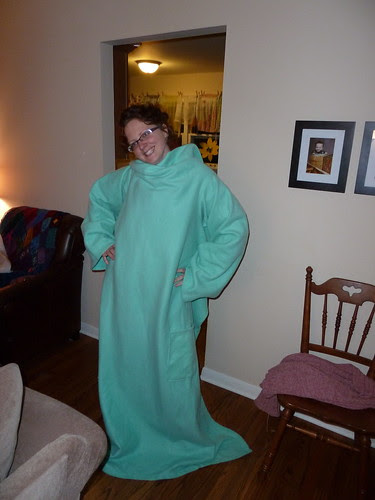 Earlier in the trip, the fmaily took a trip to Michaels where I may or may not have bought some Patons Kroy stretch yarn to make summer socks (I did). I justified this to myself by saying that I had finished the major project I'd brought (the Primavera socks and mitts) and that I could potentially finish a whole 'nother pair of socks before I landed in CA. 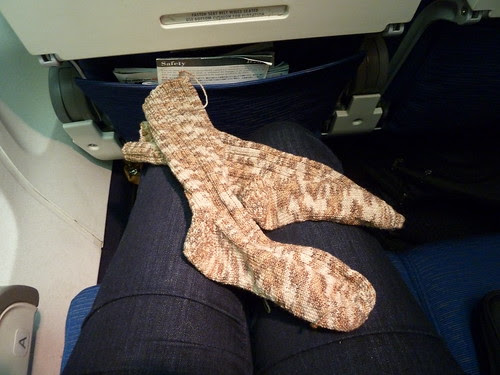 Oh yes. It was an awesome weekend. Now if only I could find my scale so I could weigh all the things I knitted!

File Under: 12-Mile Quest '10, ahhh refreshing travel, family ties, friends are the new family, wool is not a drug