Still On The Run

If your name begins with an S and ends with -hannon, you need to stop reading this RIGHT NOW. Come back after you've received your birthday present which is pictured here and would thus spoil the surprise I have worked so hard to create. Also, happy birthday!
Okay, now that she's gone, I can tell the rest of you about what's been going on lately. I finished the Vanilla Rib Socks and then plowed through Anne Hanson's Elm Row scarf for the above-mentioned birthday girl. Apparently I am one of those knitters who likes to give things away because I'm constantly putting off my own projects in favor of those for someone else. This is not, however, a bad thing. I have wonderful friends who deserve to be wrapped in beautiful things, and if those things come from my hands, all the better.

For Shann's scarf, I pulled out the Panda Wool that I got from Jasmin and Gigi's very first goodie bag back at Stitches '09. Yes, you heard me right - I didn't even go buy anything! In fact, to tangentialize for a minute, I haven't bought yarn since the game-changing trip to Babetta's with my mom back in September. Well, I did buy an extra skein of Malabrigo Lace so I can finish up the Very Happy Scarf, but that's because I didn't have enough yarn to finish the project. And I'd like to point out tangentially (of course) that I started the project originally with what should have been plenty of yarn. Damn those inaccurate yardage requirements in VLT!! But anyway, I haven't bought yarn since mid-September. That's nearly 8 weeks, people! And in that time I've been to Lambtown, the CogKNITive Fiber Retreat and sundry other yarny places. Obviously I am awesome and have the proverbial Will of Iron.

Okay, back to the real point. The yarn I used is Crystal Palace Panda Wool in Ultramarine, and while I like the pattern - it was interesting to knit and I never got bored, which is a good thing for a scarf! - it is really the color that just makes this piece. The yarn is 51% bamboo, which adds sheen in addition to drape, and I am in lurve with the whole thing. Feast your eyes on this fairly color-accurate and also fairly artistic blocking shot: 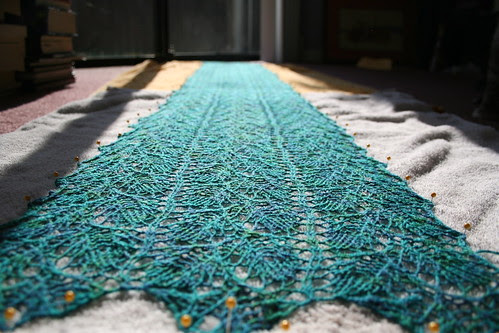 Yep. It's a great color. 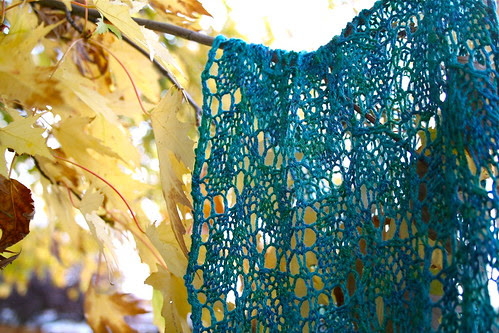 Currently I'm finishing up a Pretty Thing for another friend, and also working feverishly on a scarf for myself - having been informed today that the weather in Portland is not 70 degrees and sunny with a slight breeze like it is in Roseville. And also having left my favorite purple scarf at Crazy Sarah's last... was it New Years? Dang! But yea, I haven't needed one since then, and I obviously need one now. I'm using the same pattern as the purple one (Rav link), but I think I will crochet chain the edges so the scarf doesn't stretch as much as the last one. For this project I broke out the Noro Cash Iroha that I bought at the Commuknity closing sale last year. This is the only Noro I've ever encountered that feels like its price point to me, and I'm liking it immensely. Now I just have to finish about 3 more feet before the end of the day...

I spent Halloween weekend with my mom up in Penn Valley and we had a lovely time watching Firefly and crafting. I took the opportunity to photograph Violet nee Jezebel, whose recovery from her former abusive situation is, as previously titled, progressing apace. 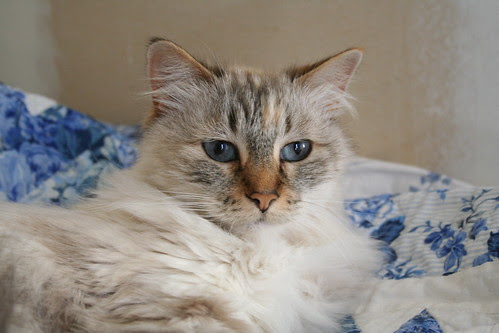 I love the China blue of her eyes, especially against the quilt my mom made. Doesn't she look less... vacant than last time? I do think, however, that she's progressed about as far as she will be able to without being in a one-cat household. Poor dear is still afraid of the other kitties and slinks around as if she's about to be kicked. But when I picked her up and put her on my bed, she purred next to my face all night and followed me around for the rest of my time up there. If I weren't certain that she'd be bullied by my own precious feline, I would have brought her home with me, especially after she chased another one of our cats away from me in a fit of ownership. Honestly, who could resist that little face?

Here's another little face for you to not resist: 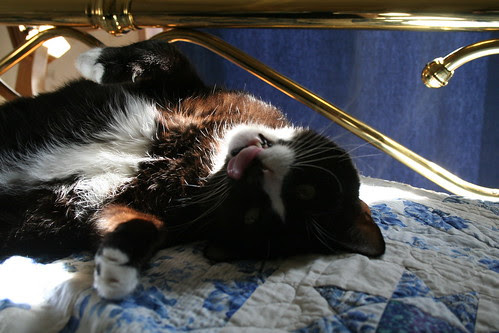 File Under: 12-Mile Quest 09, cats, friends are the new family