Aija beat me to the post, but that's good 'cause it encouraged me to write about Lambtown, which I may have let slip by otherwise. Why would I have let it slip by, you ask? Well, because I did what you're supposed to do in the forest - left only footprints and (more importantly) took only pictures. Well, pictures, some kick-ass tri-tip, and garlic fries. When I arrived, the first thing I came across was the Sheep-to-Shawl competition: 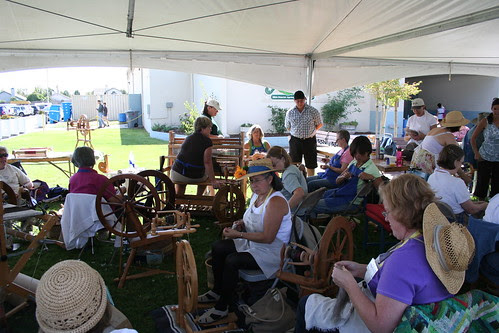 I did a quick mental checklist of wheels and saw a good number of Lendrums, Sonatas and Joys; not a big surprise since they're all very decent traveling wheels. There were a couple of Schacht Matchless wheels, and even a 30" Schacht-Reeves (but that one was for sale). However, the big ARGH! of the experience was the Baby Wolf you can partially see on the left of the photo - the woman who owns it said she got it for $300 on Craigslist. I almost slugged her and ran away with her loom; I probably would have if Aija's boy hadn't been there. Have to keep up appearances for the children, you know.

When I first heard about Lambtown, I thought I wouldn't go because I have - as you may have noticed - very little self-control when it comes to wool and the purchasing thereof. Then I looked into it a little more and found out it was about 35 minutes from my house. THEN I looked at the classes and discovered the Stephanie Gustaud was teaching all day. I thought seriously about taking her long-draw class and ultimately ended up not doing so for financial reasons, but I thought briefly about bringing my Big Book of Handspinning just in case Himself was there with his lovely bride.

Well, I forgot to bring my book, and you know what that means. 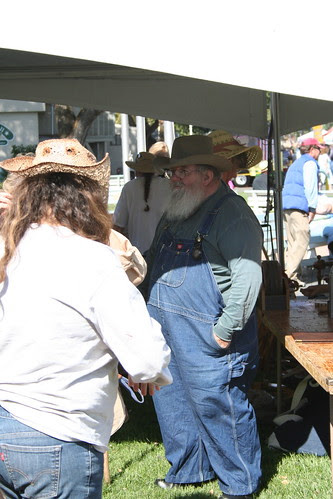 I did take a picture of him - and not a proper Kinnear, just a picture for which I got a sidelong glance after the fact. What I did not do was walk up and tell him how much his book has (in the hackneyed phrase) changed my life, nor did I simply walk up and shake his hand and say thank you. No, ladies and gentlemen, I did what we in the fan business call Chickening Out. I took my picture and walked away, which is all well-and-good when it's Kinnear himself - celebrities deserve their privacy - but is rather stupid when the person in question is famous in a (let's face it) very small circle of people. Well, there's always next year I suppose! 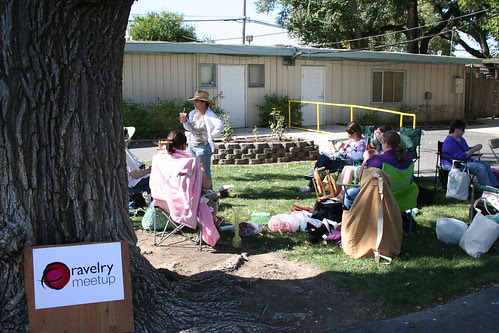 and also didn't stop to say hello. Dear reader, if you find my Social Graces walking the streets, please send them home immediately. They are sorely missed.

We watched the sheep judging, for which I refer you again to Aija's lovely post, and the sheep shearing which was slightly traumatic. The shearers nicked the sheep a few times, and the blood showed right up on that whitish wool, let me tell you. After that I got flirted with by an alpaca 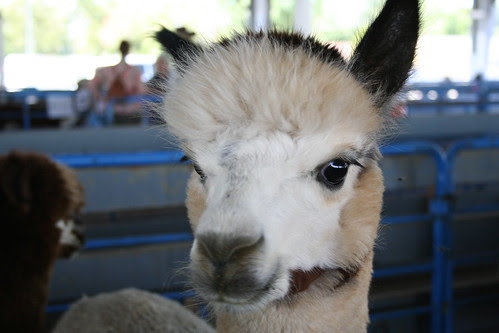 and tried to get Little Man to pose for a picture of a different alpaca, but instead had a hilarious "which camera?!?" moment: 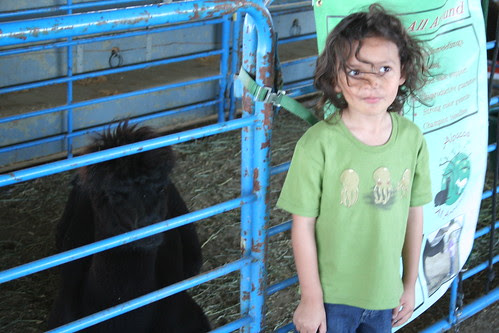 Towards the end of the day, full of garlic fries (Aija and me) and corn dogs (Little Man), we two grown ups sat on the grass and watched while he took in the bouncy house and the train. After a long day, I was super-impressed with how well he kept it together (I was promised tears and possibly a fit upon the exit of the bouncy house, but no dice. Maybe next time! ::wink::). Us grownups chatted about this and that, enjoyed the beautiful afternoon, and I took a parting picture of a fleece that the Little Man announced was Not Good Enough because it was only second place. But then, he likes the smell of unwashed ram and mohair fleeces, so obviously his judgement isn't yet as well-honed as ours: 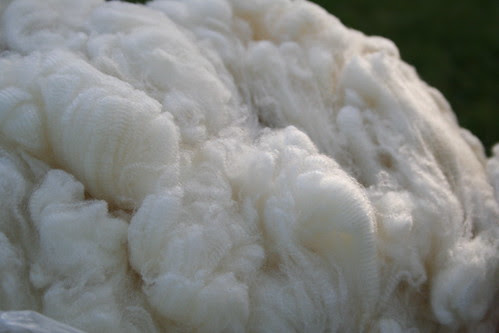 File Under: ahhh refreshing travel, friends are the new family, wool is not a drug