It's been so long! There are lots of things to catch up on, but I thought the signing that I went to with ManCandy and my friend Cyn deserved its own special place in the sun.

On the 19th of July, the three of us gathered together to head to Comix Experience in San Francisco to help celebrate their 20th anniversary. 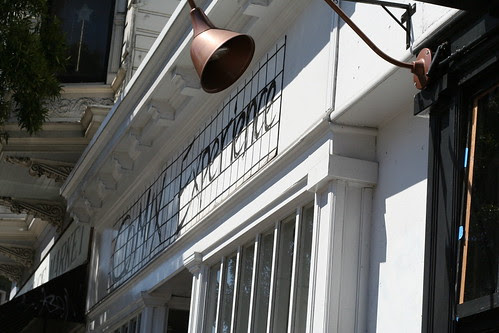 Mr. Gaiman was signing and promoting Who Killed Amanda Palmer, which sounds like a delightfully dark and strange book. I'm looking forward to owning a copy sometime in the future. I had never been to a book signing before, so I didn't know exactly what to expect. I found it charming that for the first 5-10 minutes that he was up in front of a mere 100 people - and this a gentleman who is used to signing for hundreds of people at a time - he shifted nervously back and forth and didn't really make any eye contact with anyone. After 20 years as an author and who knows how many public appearances, he was still a bit wary of the crowd; I found it very sweet.

Then we all shuffled back outside to wait in our original places in line - we were 35-37 - to come in and get our books signed. This is where I ran into a bit of a dilemma.

You see, back at the beginning of July, I packed up several boxes of books and took them up to my Mom's. Then, just before the signing, I realized that my copy of Coraline was not, in fact, on my living room shelf; it was neatly packed in a box with the rest of my Gaiman books, 3 hours away. This is what I get for being "organized" and "doing things beforehand." My copy of The Graveyard Book was still on my nightstand, so I took it and my Coraline glove (there is still only one...). Cyn, however, saved me. It turned out that she had the same edition of Coraline that I have, so we worked out a trade and Cyn bought a copy of The Dangerous Alphabet instead. I owe you big, sister.

As I walked up to have my books signed, Mr. Gaiman spotted my Coraline glove and asked if that was indeed a copy of the ones from the movie. The conversation went like this:

NG: Is that a Coraline glove?
Me: Yes! I made it. ::stupid grin::
NG: I saw someone on the internet making those full-sized pieces!
Me: ::squee!:: That was me!
NG: That's brilliant! You were on my blog!
Me: Oh, I know!
(By this time, everything out of my mouth was followed by an exclamation point.)

Mr. Gaiman put the glove on, jumped up, and gave me a big hug and a kiss on the cheek. I may have turned bright pink - I probably did. I may have also offered to make his daughter Maddy a pair in time for this winter, which gave him a papa-twinkle in his eye. 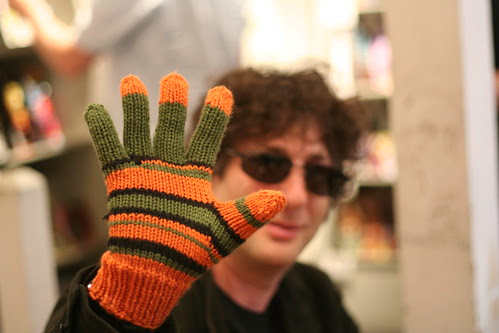 It was wonderful. My only regret is that I should have given Cyn my camera instead of a girl who worked there - Cyn would have gotten the pictures I really wanted: my Neil Gaiman hug and him signing my Coraline book with the Coraline glove on. But in the end, I was totally chuffed by the whole experience. 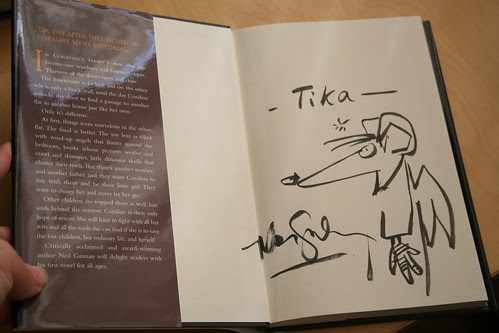 So that's it. The Coraline thing came full-circle and I got to spend some quality time with good friends; all in all, a glorious day. 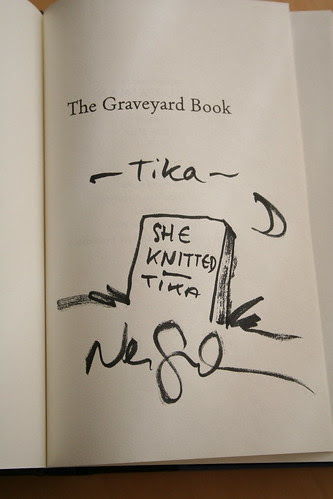 Posted by Anonymous at 6:42 AM

File Under: ketchup isn't just a condiment, patterns are for sissies and also for me, sundry tidbits