Knittin' and Spinnin' and Wishin' and Hopin'

Well, not so much with the wishin' and hopin'. But there has been knittin' and spinnin'! And also apostrophes bother me, so we'll go back to using the proper gerund, thankyouverymuch.
Let's see. I have now been in the Black Bunny Fiber Club for lo, these many months, and I've been enjoying myself greatly. However, I have yet to spin up any of Carol's delightful and personalized rovings; something had to be done! And which better roving to choose than the first one: 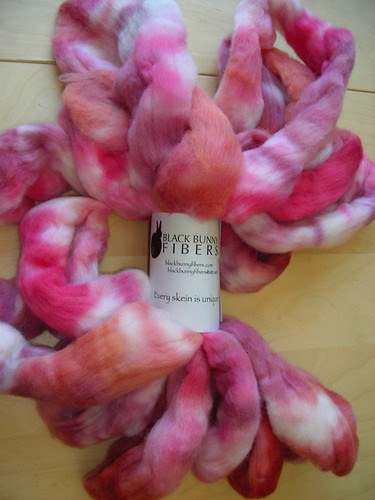 Begonia, 100% superfine Peruvian merino
I split it up into 4 equal parts, intending to make (what else but) lace. However, I found some amazing sparkly mylar thread at Joann's that threw off my entire game. Instead of thin lace singles, I tried to make chubby, fluffy singles. Then I plied them with the mylar and got this: 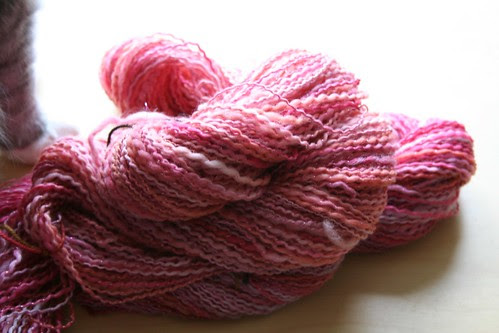 Begonia yarn 353 yds. total
Isn't it fun! I've never plied singles with thread of any kind before; I rather like it. I think this lot may become a simple feather-and-fan scarf for Yours Truly at some point - that is, once I've finished cooing over the sparkles. 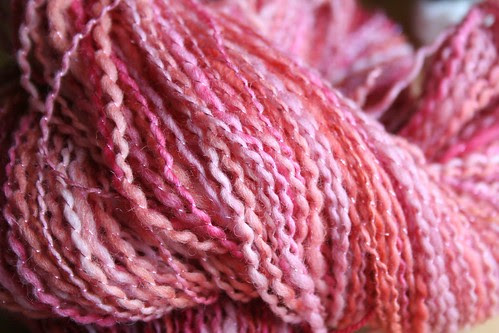 closeup of the shiny!
This is only half of the roving, but I'm calling it done because I think I may make fluffy 2-ply out of the other 2 bits I have left, and thus have 2 different style yarns in the same colorway - something I've never done before.

I've been working away like a busy bee at the Honeybee Stole from Knitspot: 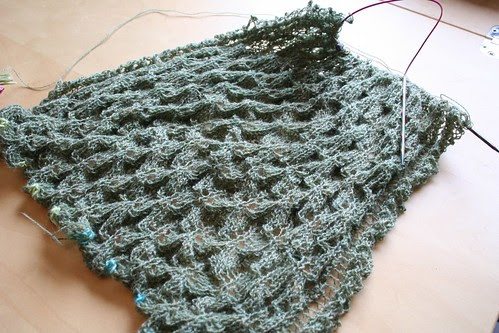 I'm on repeat 7 of 10 for this part of the pattern, and it's going fairly smoothly. I've finally learned to read the lace, which has helped the last few repeats move much more quickly. I'm still not certain if I'll get it done in time for my Very Awkward Conversation, but I'm enjoying working on it anyway. Here's the artsy shot: 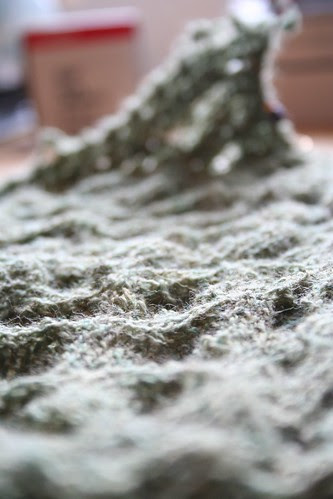 Tomorrow is the annual spinning day at the Retzlaff Winery. This year I will take pictures with more than my cellphone! My friend AuntieSocial and I are planning to find another fleece to split this year; last year we both took half of a gorgeous charcoal grey named Topper and a white merino/corriedale cross named Steve. This year, if Steve's fleece is available again, I think that may be the one we bring home, but I'll keep you posted! Given that the student loans are going to come back to bite me soon, half of a fleece is all I can manage this year, so I'll have to make it a good one.

In the meantime, here are some cute kitty pictures that I just couldn't resist. They show off the boys' personalities to perfection. 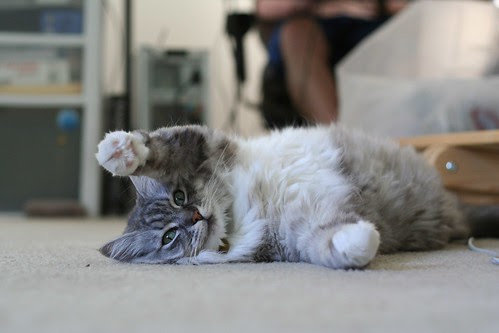 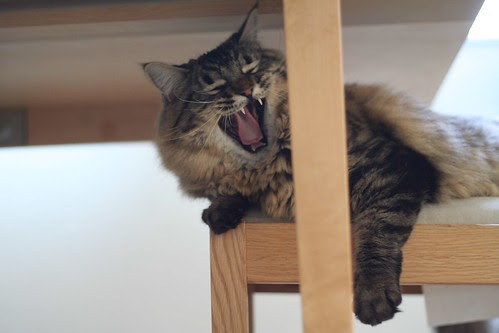 Panza the Dragon Kitty still hisses at the neighbors
And now I'm off to listen to Pride and Prejudice while I work on the Honeybee Stole!
Posted by Anonymous at 11:41 PM

File Under: 12-Mile Quest 09, set those needles free, you spin me