Hmmm, let's see.
I am done with school except for the waiting-for-grades part, which is the real bitch of the matter. I will know my fate on the 28th, but until then I am going to assume I'm done for reals this time.
ManCandy and I spent the Memorial Day weekend at my mom's house, where we ate ourselves sick twice in a row. Delicious marinated steaks, corn-on-the-cob, ice cream cake, lemon tarts and (with the exception of the corn) nary a vegetable to be found. While we were up there, my Aunt C showed up with her ex-daughter-in-law, granddaughter, and a cat. The last was a "gift" for my mom; back when my mother was trying to qualify for a cat from the Ragdoll Rescue Shelter, she couldn't because one of our kitties snuck outside - it's a FARM for chrissake! - and got bit by something or other, abscessed and died. So the shelter, instead of giving a cat a loving and honest home, rejected my mom because she occasionally leaves the house door open. Aunt C responded by applying and lying through her teeth about how she never lets cats outside and would never feed them anything except fresh meat or some such nonsense, and of course was rewarded for her falsehoods with Sugar nee Nicole.
Since then, my mother has acquired a purebred Ragdoll named Pierre, of whom I like taking silly pictures. Anyway, all of this happened about 3 years ago. Since then, Sugar has been an inside/outside cat and perfectly happy, until about 6 months ago when Aunt C got a second miniature pinscher who thought of Sugar as her own personal chew toy. Sugar promptly moved out of Aunt C's house and has been MIA up until last week, when she arrived bedraggled and half-starved. Aunt C brought her to mom's this weekend because she knew that Sugar would have a home where she was safe and cared for and unmolested by dogs the size of a small Doc Marten boot.
Mom put her in the room I usually stay in for the introduction period, and within a day she was grooming her fur - or what is left of it after removing all the mats - and cuddling with me and ManCandy. On Sunday night I stayed in Rocklin with THB while Sugar worked her wiles on both ManCandy and my stepdad, earning her the new moniker of Jezabel. 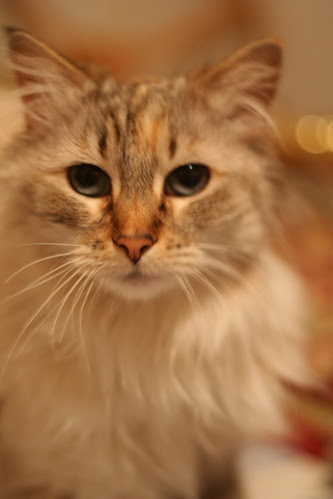 I would have brought her home myself, but the dynamic of the house is shaky enough between Darcy and Panza, and I'm afraid that another kitteh - even a sweet, timid loving one like Jezabel - might permanently disrupt the balance. Mom is worried about the same problem, but she got stuck with the 9/10ths rule. Ahh, well - ManCandy can visit the little hussy when we go to see my mom.

In terms of knitting, I have nothing to show. The Super-Secret Project is about 3 hours from being done - I blocked it this weekend and need to add the embellishment, then send it off an wait for it to be received, then I can show you all pictures. I'm really quite proud of it, and it'll add a hefty chunk to my 12-Mile Quest.

In addition, the Girasole is also nearly done. I have 10 more rounds until I start the knitted-on border, and just a hair over 2 balls of yarn left. I stopped by Fibers up in Grass Valley this weekend to see if I could match the colorway, but decided against any yarn at all in favor of just hoping I have enough. If worse comes to worst, I can always have them ship me a ball of the current dyelot, which isn't different enough that it will matter much. I am simply trying to avoid ending up with extra yarn, and who knows? Those 2 balls might be plenty. Snerk. Also, it currently looks like a gigantic cherry red sea urchin. I'm hoping it blocks out.

Did you notice what I said up there? I got out of Fibers without buying anything. There is no bank record whatsoever that I was ever even there. How impressed are you? Mom was so impressed that she told everyone at the bbq that afternoon. Aren't moms great?!?

I did, however, get my KnitPicks order just before I left for The Farm. In it were 3 packets of stitch markers (lace, here I come!), 2 pairs of size 7 needles, and a few skeins of lace yarn. Four were the Gloss Lace in natural so that I can kettle-dye them (the colors only come in solids), and 3 skeins of Shadow yarn in Cattail Heather: 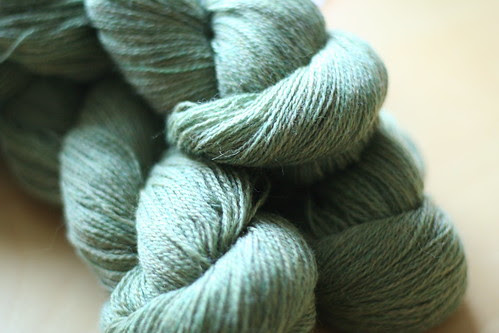 It's a weirder green than in this picture - I've been having color trouble with the snooty camera lately, but in this case it's just because this particular green is so awesome it defies photography. I'm going to knit it into a something-or-other in time for a Very Awkward Conversation that's coming up - something from the deep dark past that needs to be exorcised (and nothing to do with ManCandy, so don't worry). Come to think of it, you guys might have some good ideas. I need a stunning, gorgeous-yet-simple "oh, yes, I DID make this, and yes, I'm very talented" sort of stole. It should also say "oh, this old thing?" if at all possible. Perhaps something by Anne Hanson? Something in which I can wrap myself against any emotional onslaught - self-generated or otherwise - and be safe. Suggestions are welcome, although I begin to suspect that a well-cultivated air of je ne sais quoi might help immensely. I'll get right on that.

In the mean time, I'm going to go finish the Super-Secret Project so that it can be revealed!
Posted by Anonymous at 8:23 PM

File Under: cats, everything old is new again, panic makes your eyes look pretty, patterns are for sissies and also for me, wool is not a drug