I joined the Ravelry group Ten Minutes a Day last week, and I finally decided to start actually spinning my 10 minutes per day this Tuesday. So far it's been three days, and I've been doing very well! I notice that my 10 minutes stretches into twenty, thirty, even forty minutes depending on whether I've begun a new episode of Smallville or not. So far I'm nearly finished with my second ply of the Wish You Were Here, but shots of bobbins full of the same roving aren't really super interesting so I'll spare you the details.
I finished my Santa Fe socks! I think I've finally worked out a good vanilla sock pattern for my feet, and it turns out that I need between 56 and 60 stitches around to fit well. Most of my previous socks are a teeny bit sloppy around the foot, but these ones are perfect and I love them. Plus I'm completely enthralled with the color: Pagewood Farms Denali "Santa Fe" socks, 315 yards.
Sorry for the gigantic pictures. Apparently Safari doesn't like to shrink pictures like Camino does, and I'm blogging from the VRL at SJSU. Scanning slides makes for a lot of downtime.
Here's the photo of the finished Drunken Monkey socks: 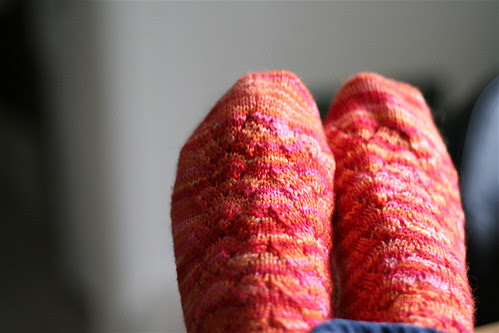 Fleece Artist 2/6 merino "Sangria" yarn, No-Purl Monkey pattern. Sangria + Monkey = Drunken Monkey!
I like the offset photo, although it wasn't intentional. I shot both pairs of socks this morning right before I headed out for work and uploaded them quickly, knowing I'd be scanning slides and have leisure to blog in between slides.
I'm also coming along on the last Seeded Rib Scarf: 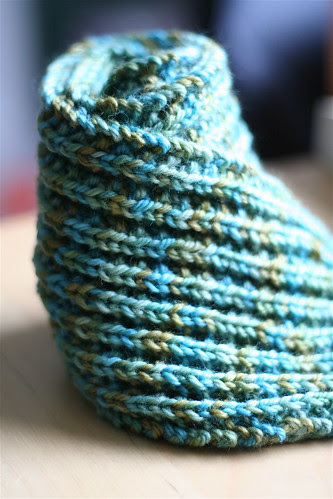 Lorna's Laces Shepherd Worsted, "Huron"
In addition to ALL that, I've been trucking along on the EZ Seamless Yoke Sweater. I worked out my very own stranded pattern and I'll probably start swatching it today once I run out of the first ball of yarn for the Seeded Rib Scarf.
Life has been pretty quiet, as you could probably tell given the vast amount of knitting that's been completed. Tonight we're headed out to dinner and see Coraline in downtown San Jose. I re-read Coraline a couple of days ago and was struck again by the level of wordsmithing that Neil Gaiman uses. His books aren't so much written as crafted, and I love them. I'm excited to see the film version.
Posted by Anonymous at 11:42 AM

File Under: 12-Mile Quest 09, EZ does it, set those needles free, you spin me