I've been plugging away at things lately. Inspiration seems to have dissolved along with my will to live in our annual early September heat wave, so I've been using the time to finish up a whack of stuff that has been hanging out on the needles: 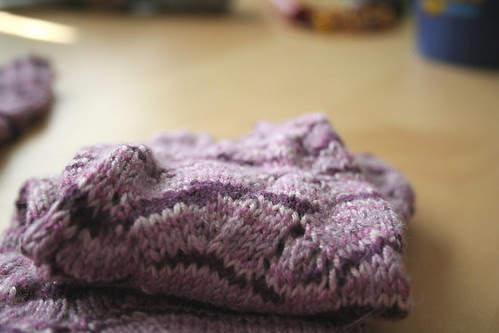 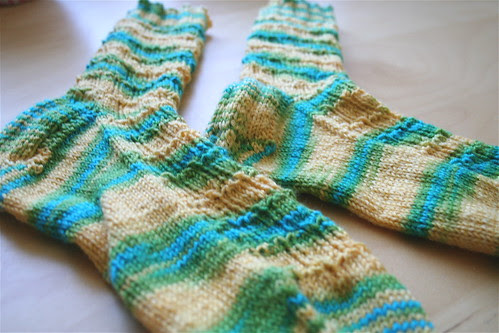 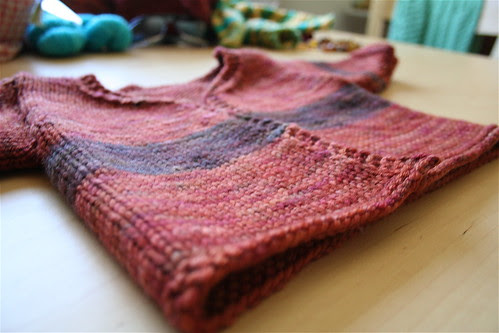 Theodora Sweater, Dream in Color Classy "Chinatown Apple" and "November Muse," 198 yds.
Ok, well that last one isn't 100% complete - I'll pull out the needle and thread to attach the buttons after I publish this post. But for real it'll get done today. I swear.
I've also been fooling around with a Branching Out Stole, and I think I've come up with a workable pattern. I'm one whole repeat into the thing, and it seems to be coming along nicely. I'm nowhere near close on memorizing the lace yet though, so no pictures yet; I'm avoiding the 'lookie! I'm smart!' jinx.
I've decided that 12 miles of knitting in 12 months isn't such a bad goal, so I'm extending my 12-Mile Quest through December. Despite the fact that once again I seem to have bitten off more than I can chew in terms of completed items, I do feel like I've been getting things done in a relatively timely fashion. This is not the time to mention to me how long the knitting on my Ribbi Cardi has been finished. I'm waiting for the Perfect Time to block it, and obviously that Time has not arrived. Shut up.
Jasmin and I sat and chatted at Purlescence this afternoon, and I manfully resisted the siren call of a Perfected Henley's worth of Dream in Color. As far as I can tell, the company's not going anywhere and I should be able to get the yarn in February, should I still lust after it. This Social Pressure thing is working!
However, I did pick up these little gems: 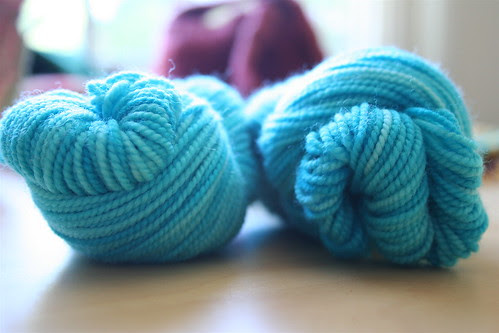 Shibui Knits Sock, "Hawaiian Sea"
We all agreed that if a knitter has been lusting after a color so much that it invades her dreams, she should probably make room for it in her stash, so it came home with me.  I'm not certain it wants to be socks, but I could be wrong - perhaps it wants to be some Millicents or even some German Stockings. Hmmm. Speaking of the ever-innovative Cookie A., I picked up her 2 newest patterns today: Ornette and Moselle. Aren't they lovely! It'll be awhile before I make them, considering that even simple things have my brain in a muddle lately, but they're in my queue nevertheless.
I also brought this little unassuming ball home: 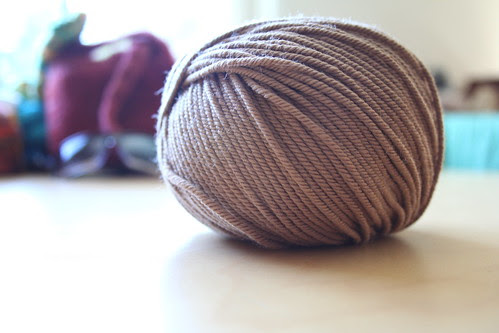 Cascade SW merino, "Pie Crust"
It's not really called Pie Crust, but that's what it is destined to become. That's right folks, I remembered to get pie crust yarn after only a month and a half of forgetting. Call Guinness; we've got a record on our hands here. And while you're there, get me a celebratory beer.
Lastly, Robin the Amazing remembered my abiding love for Schaefer and gave me this: 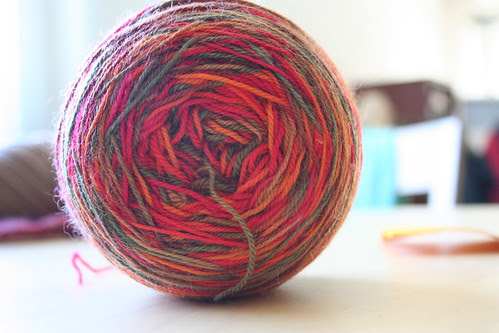 Schaefer Anne... mmmm!
It's this lovely autumnal mixture of colors that just make me smile. Now if you'll excuse me, I have to go purge 200 grams of yarn from my stash. I think the awful chenille in the back corner of my bureau might be just the thing...
P.S. - As promised, the Baby Surprise Jacket yardage was [drumroll please!]: 360 yds.
Posted by Anonymous at 4:50 PM

File Under: 12-Mile Quest, set those needles free, under pressure, wool is not a drug