Run Out and Reset

So just after Brie left her comment about my adherence to the Social Pressure Experiment, I fell down a little. But before you snort into your tea (it is before noon, after all), allow me to explain. My friends Kate and Conrad moved to Prague, Czech Republic on Tuesday. They are some of the best, most loyal friends ever, and I will miss them terribly. A few years ago, I re-taught Kate how to knit, and she's been working doggedly away on the same garter stitch scarf ever since. When I learned they were actually leaving (it's been in the works for a couple of years now), I decided I would knit her something. Something gorgeous, lacy, and appropriate for going out to the nice dinners Conrad is so fond of. Something epic. Something like this.

Then, a week before they left, I spent the night at their place in order to help them get rid of all the wine they couldn't take with them to Europe, and Kate tried on my No-Purl Monkey socks. She's very sensitive to wool, but these, she gushed, were perfect - except that they are purple. Kate is not a girly-girl, and the only other color of Panda Silk in my stash was pink. So that settled it; off to the yarn store I went, in search of a Kate-colored Panda Silk that I could whip up into socks in the week before they left.

When I got to Purlescence, I did a bit of in-for-a-penny shopping and picked out three colors I knew Kate would like: straw, tan, and olive. 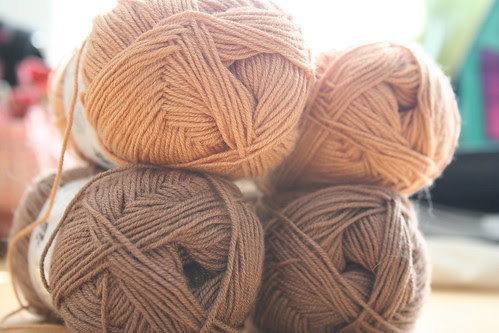 Olive was the color I pulled out of the bag first, so off I went. I started the socks on Tuesday, hoping to have them done in time for the going away party on Saturday. It didn't quite work out - I had worked through most of the second sock's gusset decreases by Saturday night. So in between sets of Rock Band, I knitted away, and managed to graft together the toe during Conrad's rendition of "Paranoid." 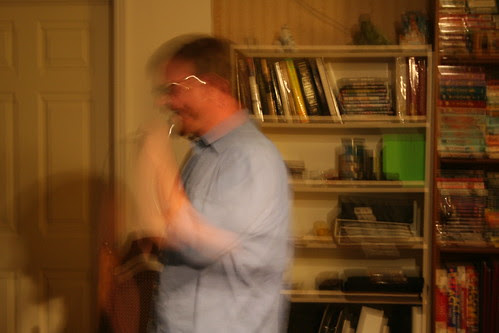 So yes, I bought yarn without intending to get rid of something in the stash. But I did seriously consider what I have before making my expedition, which was the major point of the Experiment in the first place. Neither Jasmin nor I are very interested in having a stash that fits into a shoebox; we simply wanted to break the habit of buying yarn on impulse.

I planned to confess once Jasmin got back from the California Wool Festival, but I received some unexpected absolution in the form of Jasmin's poor resist roll against fleece. She picked up one or two lovely things, and to assuage what she thought would be my indignation - as well as to make up for the loss of the Fleece That Got Away - she bought me 2 pounds of gorgeous oatmeal roving: 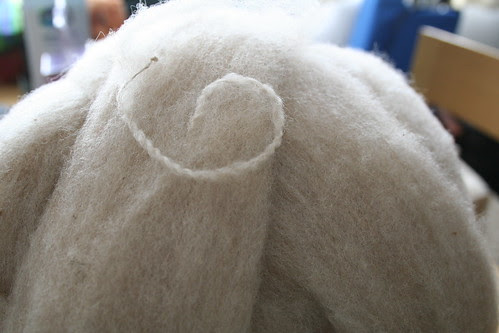 It's merino, raised and processed by a 93-year-old woman, and it's simply gorgeous. Every time I look at it, I see a cobweb ring shawl, all floaty and serene. Absolution, indeed. I 'fessed up to the Panda Silk, and we decided that we would call it a wash.

In other news, I've started the daunting task of Christmas knitting. It's really not so bad; I started with a simple diagonal scarf for my sissy out of some handspun. I realized at some point that I should probably have begun the hat first, so I put the scarf on hold and cast on for a hat last night: 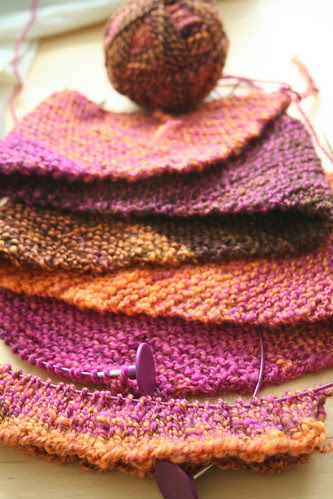 I hope the colors agree with her. I'm pretty sure they will - she's wicked cute.

And speaking of wicked cute, let me show you something that is NOT: 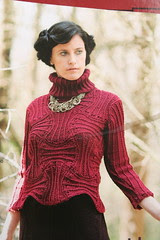 This is the Norah Gaughan sweater that (dis)graces the front of the Webs catalog for Fall 08. Now, I'm a fan of Norah's, and I love her unconventional approach to construction. And I confess that at first, I liked this particular unconventional confection. But then I began to channel my inner Jessica and Heather, to the detriment of the garment. The epaulet shape on the collar/shoulders is very cute, but it does strange sag-inducing things to her bust. Then the bottom two rows of shapes create this weird, unattractive corset-but-not shape around her middle, and make her look like nothing so much as an aging flapper whose Spanx have lost their ability to rein in what they are designed to rein in. I hate it. Hate hate hate, and I can't think of a single person I know - of any size - who would look good in this shape.

This idea might possibly fly if the shaped bits stayed on the shoulders and dissolved into a nicely-fitted stockinette sweater, but as it is, I am just bowled over by the unflatteringlyness of the whole thing.

On the plus side, I really like the model's hair.

I don't have to work tomorrow - the Refreshingly Normal family is hanging out together, thus giving me an unexpected day off - so I'm headed up to the Farm tonight. I plan to spend the weekend laying on the porch and working on my as-yet-non-existent tan.

Have a good weekend! 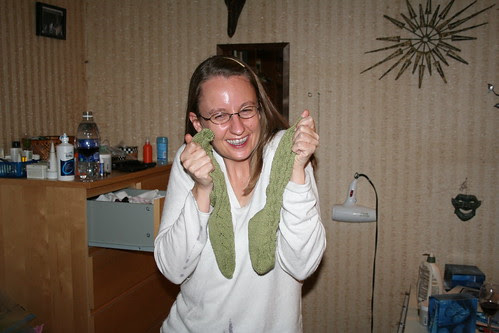