I have stuff in various levels of completion! First, the Ribbi Cardi. After careful measuring, I have discovered that my hips are not the same size as my bust. They are, in point of fact, several inches larger, which tends to make my store-bought sweaters either ride up my hips or sag in the chest. I have made a quietly personal (and now painfully public, apparently) decision to buy clothing for the size that I am instead of the size I was four years ago or the size I want to be in 6 months; a decision which also affects the size of sweaters I choose to make for myself. So I cast on the 42" size for the bottom of the Ribbi Cardi and slowly decreased up to the 38" size. I'm fairly certain it will fit perfectly, and if it's a wee bit off the double-pull zipper should take care of any slight discrepancies between my hips and my tape measure. I know this, because if you look at the bottom of the Ribbi Cardi model, there is no doubt in my mind that, were the zipper fully zipped, the ribbing would pull in a generally unattractive fashion.

So anyway. I'm done with the back and working my way up the left front: 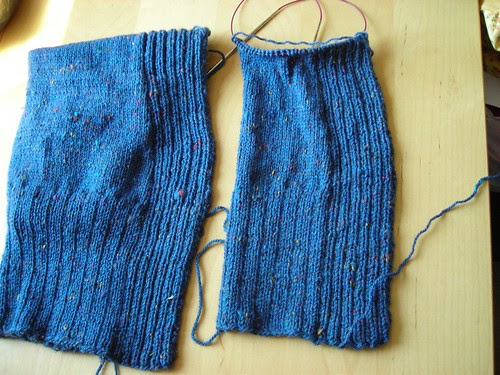 I will probably over-dye this a darker blue; in the ball it's not quite as ugly 70's blue as it is knitted up.
Also, I got my Black Bunny Fiber Club 2 shipment! I don't mind telling you that I was a little stressed when I heard that the shipments went out while I was away from home for a week. Things around here tend to disappear if they're not nailed down, and the mental picture of some gangster thug's face while opening a stolen package of bright green wool didn't quite make up for the fact that I wanted the wool for my own. The stress was compounded when I arrived home last night to a package on the stoop for ManCandy but not for me. Thankfully, it was squished into our tiny mailbox with the rest of the mail, and both Mr. Darcy and I got to approve of it fully. 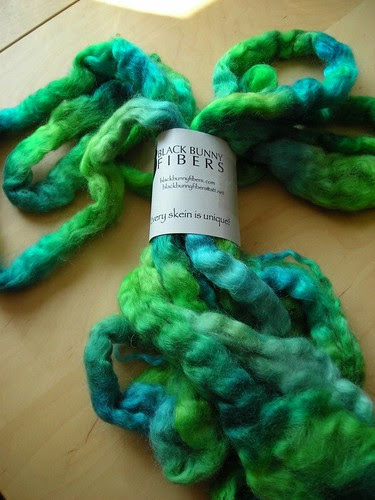 Black Bunny Fibers "Sonata," 100% Wenseydale, 8oz.
I'm not sure if Carol at BBF knows that my wheel is a Sonata, but I found the name amusing nonetheless.

Also, I finished spinning and plying my Tobacco Road! 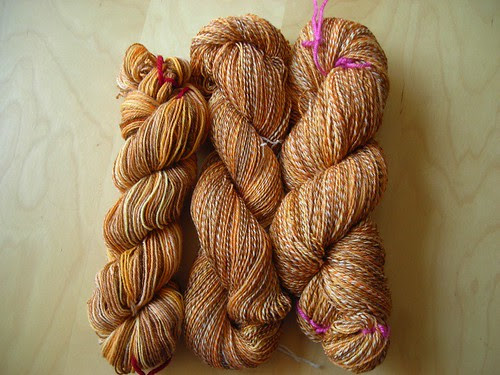 The two large skeins are 3-ply from 3 bobbins, and the left skein is the navajo-plied remnants after the first bobbin of singles ran out. Clearly next time I will have to weigh out better, but since I have enough in the navajo skein for heels and toes, I'm happy. The yarn is a bit hard with not much bounce, but I'm hoping a good Soak and hanging in the sun will help out a bit. Next time, I'm going to attempt to put more air in my singles - watch and see how that works out!

You'd think that I would begin on the Easter Egg I have half-finished for Jasmin, but no. I'm in full-fledged Crown Mountain Farm mode, so last night I hauled out my (sizeable and hardly dented) CMF stash and came out with this one: 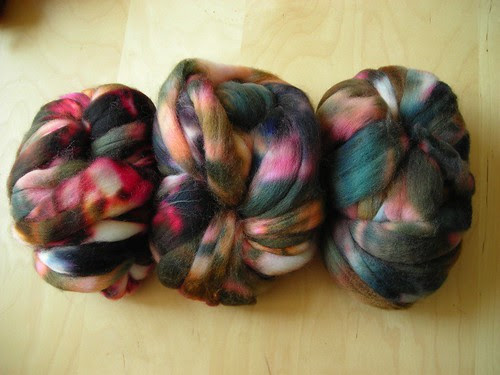 CMF SW merino, "Under the Boardwalk" 8oz (carefully weighed out)
I haven't decided yet whether I want to 3-ply it from 3 bobbins or whether I want to navajo-ply it to maintain the colors, but I don't have to make an actual decision until I've finished with the first two chunks. This is my new Tour de Fleece project: to spin up, ply, and finish this yarn before July 27. I think I'm going to have to take my wheel to the Campbell Relay for Life on the 12th. And speaking of worthy causes...

*****
It turns out that Stephanie Pearl-McPhee isn't doing the Knitting Olympics this year. When I heard the news, Jasmin and I were on IM, and I pish-tushed the Yarn Harlot's humanitarian revulsion for China, saying that the Olympics are supposed to transcend that sort of thing, and besides I plan to knit while watching my favorite Olympic sport: the equestrian 3-day eventing.

Three years ago, my mom's friends Cevie and Don traveled to China to adopt a baby girl. Her name is Ana Lin, and she turns four in August. Last year, ManCandy and I met her at Cevie's house, where she was shy, retiring and generally a quiet little kit of a girl. This year, she has blossomed into a full-blown bunny - adorable, friendly and cheerful. I introduced her to my horse, Shara, to the chickens and to our decrepit Peking duck, Donald (7 years old, blind, bedraggled and still king of the roost); I helped her pick carrots from mom's garden to feed the horse and my brother Gabe taught her to throw a ball for Sadie, our golden retriever. 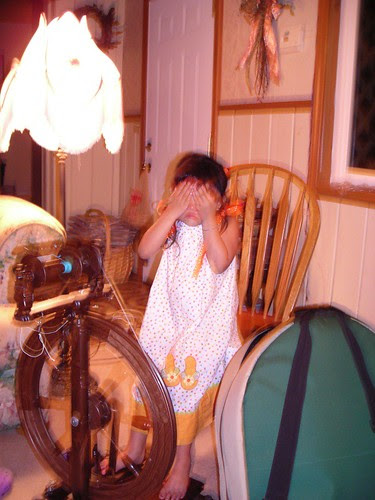 When she asked what kind of meat was on the ribs we ate for dinner and was told "pork," she did a creditable impression of a pig, complete with pretend rooting over her plate - much to the delight of me, my brother, ManCandy and HeteroLifemate. Possibly also to the embarrassment of her mother, but I have a feeling her dad taught her that particular gesture. She fetched things from the kitchen, actually helped with dinner (instead of the expected "helping" with dinner), and was generally an utterly adorable child.

She asked me about my spinning wheel, and when I told her it was for making yarn, she replied, "Oh, from wool!" I blinked several times - it's not often one gets to be in the presence of non-Muggle toddlers - and she seized the opportunity to ask me to teach her to spin. With such an inducement, how could I not? 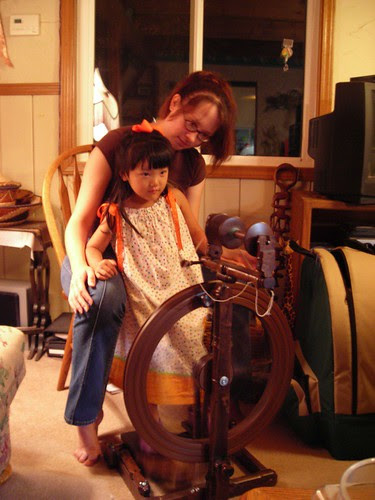 I let her treadle with no wool on the wheel, and then let her treadle while I worked some wool up into a quick thick-and-thin navajo-plied length - perhaps 4 yards or so, which she took home to make, I later learned, a necklace and bracelet for her dad. She was fascinated and excited, and overall I decided that it was a fabulous way to spend the first day of the Tour de Fleece.

While Ana Lin was treadling away, I reached up to fix her hair bows, and noticed that her head was oddly shaped. The back of her head is flat, with nearly square corners - the result of spending the first year of her life on her back in a Chinese orphanage. Her actual skull is malformed because she spent so much time laying down - and not only laying down; she was completely swaddled and unable to move. For an entire year. This three-year-old girl has post-traumatic stress disorder to the tune of a medic alert bracelet because of the way she was (not)treated for the first 12 months of her life - her mother told me that she was lucky to be picked up once per day. As a baby. What a disgrace to modern "civilization."

So I publicly rescind my pooh-poohing of the Yarn Harlot's reservations regarding the Beijing Olympics. Sometimes we.. errr, I, rather... get so wrapped up in what I want to do that I don't stop to think if it's right or not. But I'm a knitter and a spinner and an artist, as well as a teacher and a nanny and a sister/daughter. All seven of those things make Stephanie right about China and its attitudes toward human life - not to mention rights - and I think it's time we stood up and made a bigger deal about it. I, too, will not be participating in the Knitting Olympics this year, and while I will probably still watch the 3-day eventing, it will be with a heavy heart. I know that as protests go it's no more than a squeak, but it's what I've got and I'm going to use it. 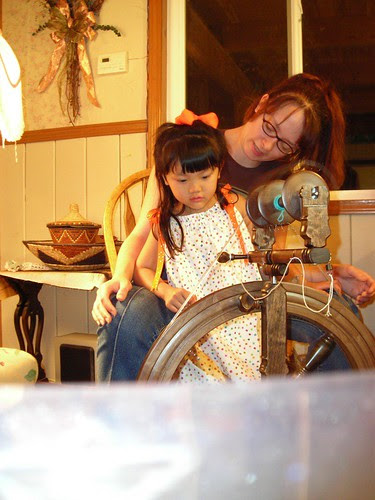 Posted by Anonymous at 2:14 PM

File Under: 12-Mile Quest, a goal is a wish your heart makes, ahhh refreshing travel, sundry tidbits, wool is not a drug