I came home last night to a big box from Paradise Fibers, and instead of taking a picture I opened it and immediately set about putting my new wheel together. The whole affair took about 20 minutes, but it would have gone faster if I'd done what the very first direction said and read through them all first. I was convinced that there would be a part missing or something would be cracked or damaged (the box with 500 "FRAGILE!" labels was not in pristine condition... UPS I'm looking at you!), but everything was present and accounted for. It is beautiful and needs a name, but that will come in time. 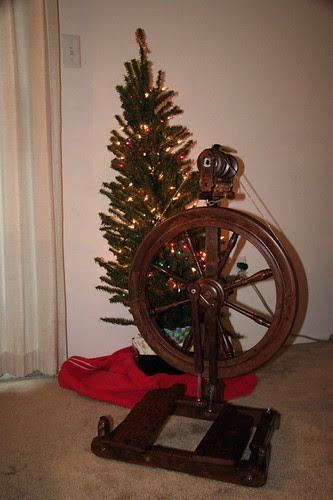 The photo is a bit dark, but it's the best i could do under the rushed "I wanna play!" circumstances. To start, I grabbed what was left of the Daphne roving I bought from Zero back in July and just... started. No books, no real instructions, just started. And shockingly, it went just fine, but there was a nagging fear in the back of my head. Spinning is great, the wheel is gorgeous, but what if I get bored? What if I hate it and it's just one of those things that the moment you get one, you don't want it anymore? I went to bed terrified that all of my longing was for nothing, and (worse) that ManCandy's and my family's good wishes and money were for nothing. It's a sinking feeling, that.

When I woke up this morning, I realized something. I'm not a spinner yet. I haven't read a book or taken a class, I haven't played with the Wheel for more than an hour, and I'm not good at it yet. I hate not being good at things. If I'm not good at something immediately, rushing to the head of the class without studying or working at all let alone hard, I give up and find something I am good at. Knitting was the exception; I plowed away at it until I felt like I could call myself a knitter because if it could be considered child labor in the 17th century, I could certainly do it. Spinning is a natural offshoot of knitting - or perhaps the other way 'round - and it's something I will have to get good at. I hopped out of bed and threw on a sweatshirt, then came face to face with the Wheel. It looked intimidating.

So I put on a pot of coffee and read my internets. Then I listened to CastOn and played some WoW (don't get me started...). But after about a half an hour, the thing sitting next to me started to whisper quietly of the roving in my closet, the fleeces my mother gave me, and the possibility of plying what was on my drop spindle with whatever ended up on the bobbin, which ended up being this: 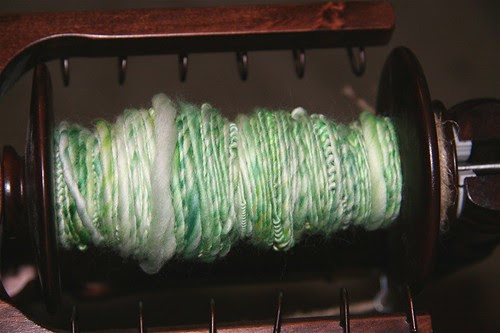 Not super pretty, but not a complete disaster either. I put that bobbin on the built-in Lazy Kate, put on a fresh one and snugged up the Scotch tension (brilliant system!), and wound the singles from my drop spindle onto a second bobbin. Then I plied them together all by myself, and when the wheel singles ran out and I still had half of a bobbin of drop spindle singles left, I Navajo plied the rest. And here it is, my first bobbin of yarn from my first roving ever. Unfortunately it's superwash, otherwise it would make a great felted project. As it is, I'm not sure what to do with it; it won't be very soft or easy to work with or even very nice to wear, but I'm proud of my little bobbin anyway. 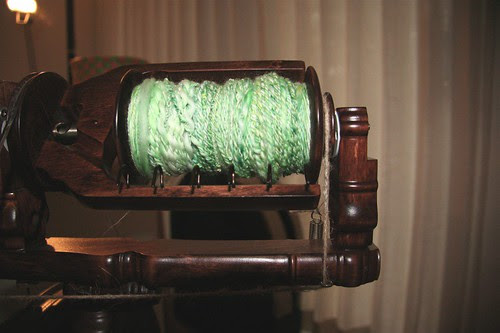 Oh, yes. That feeling of worry is gone, all right. Although as I sit here, my feet have the stranges feeling of treadling up and down despite being flat on the floor.
Posted by Anonymous at 1:04 PM

File Under: sundry tidbits, you spin me