This is my mother's cat, Waffles. 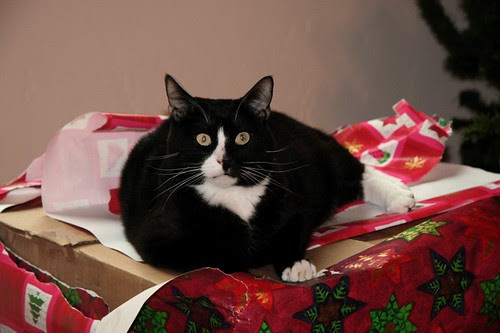 He is built like a boxer and has more personality than most people I know. If he were a human, I think he'd be a Hell's Angel with a Heart of Gold - the kind of guy who scares away the baddies and passes out presents at Christmas to poor orphans. Speaking of Christmas, you may have noticed that he's sitting on an open present. It's a box. Here's a picture for scale: 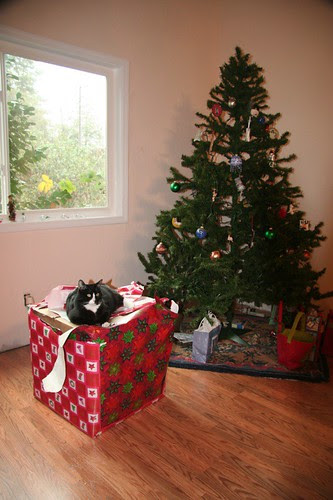 That's a big, honkin' box, as my mom would (did) say. And what's inside? Spinning batts from the sheep who live next door! My mom asked our neighbor for their fleeces (they're usually just thrown away [Gah!]) and sent them off to be processed. There's still a bit of VM in the batts, but nothing a pair of hand carders can't fix. It's two fleeces-worth of creamy, beautiful wool, and it's aaaaallllll mine! Hurrah!

The batts have made me even more anxious for my wheel to arrive. I ordered it on Christmas Day and have been slightly twitchy ever since. I hoped for Friday, but settled for today when the UPS man didn't knock on my door. I know, I know, the delivery date is set for the second, but wouldn't it be nice of UPS to deliver early? Just this once? No dice. So I've been watching my "track this" link in agony, waiting for an update. In vain.

Stupid UPS! Argh! Please don't lose my wheel or I will cry. Do you want me to cry? I didn't think so.

As far as knitting, I'm down to the foot of my brother's (second) first Charade sock. Yes, I'm re-knitting these as well since apparently I have a talent for losing my pattern notes in addition to losing my half-finished knitting (mom's Faina Shawl has gone AWOL). So I tried something different: a crochet cast-on, 2" of k2p2 ribbing, then I took off the crochet chain and used a sewn bind-off for the cuff. Very tidy and even though it's more work initially, I like it a whole big much-a-lot. There will be more cuffs like this in my future. And more notes.

In other news, I am a bad dieter. Lord help me if I ever need to lose serious weight! I completely lost my head this weekend with my mom at the yarn store because I found A Yarn I Love. It's another one of those "if I couldn't use anything else ever" yarns, and I forsee it holding a secondary place in my heart next to Interlacements Tokyo. It's Elsabeth Lavold's Silky Wool in a colorway that apparently doesn't exist on any shade card. It's a lovely rusty cranberry red, and I got enough to make a sweater:

And a bunch of Mission Falls 1824 in a true cranberry for a pair of Fetching mitts, a hat and a scarf. Woot!

I also picked up some roving from Pigeonroof Studios and Crazy Monkey. Because with the wheel on the way, how could I resist? And speaking of which, since it's not here I think I'll go play with my drop spindle to assuage my agony.

Tonight ManCandy and I are headed to Kate's house for her infamous Salmon Risotto, some BSG:Razor and champagne, followed by bed and brunch in the morning. What a great way to spend New Year's Eve!

Oh, P.S. - my uncle Roger is a wonderful man for many reasons, but one of them is that he got bored at work one day and decided that instead of slogging away, he would go to the St. George Distillery in Alameda and stand in a 3-hour line for some of this: 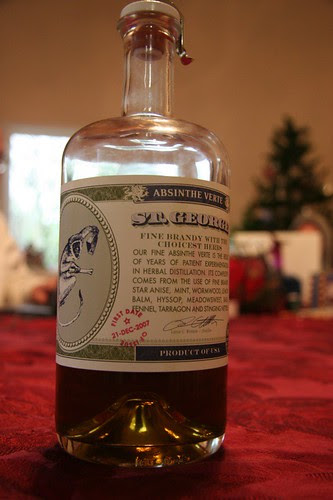 The first domestic and legal absinthe in the US since 1912. We drank it at Late Christmas Dinner, and even ManCandy liked it. I'm not a fan of strong anise flavors, but poured over a spoon with a sugar cube into a bit of icy water was a treat and a half. Thanks, Uncle Roger! Next time I'll be right there with you in line.
Posted by Anonymous at 3:06 PM

File Under: cats, wool is not a drug, you spin me