Lookie what came in the mail today!

These are the s-m-r-t books about women's lives in Regency, Victorian, and Georgian England. I also got a couple of mass market fantasy novels to read while I'm in Mexico this month, season 6 of How I Met Your Mother, and season 1 of Big Bang Theory; but those aren't quite so important-looking so they didn't make it into the picture. They also already had places on my shelves, while these need a solid foot of room next to one another. Did I hear someone say "more bookshelves"?

I've been thinking more about knitting a sweater this month, and I've pretty much decided against it. I have a lot of knitting already going on that I'd like to finish in order to complete the 11-Mile Quest, and it's already the fourth of November! Plus there's the wedding coming up in early December that I'd like to knit a shawl for if possible. I've been on a finishing kick over the last couple of days; the nearly-finished items sitting on my coffee table finally banded together and glared at me hard enough that I pulled out my darning needle and went to town:

Plain k3p1 rib socks over 56 stitches. How about that neon, huh? Wow.

This was an experiment that I'm quite pleased with! I held both yarns double throughout, and ended up with only 3g total left over. How's that for using up half-skeins of yarn!?! I got the idea from Brie, who regularly doubles up her huge Palette stash to make sweaters with unreal yardage and thus achieves her mileage goals much more often than I do.

I was tickled pink to find these wooden buttons in my button tin last night! I don't remember buying them or even whether I had a specific project in mind for them, but I'm thrilled with how they contrast with the blue of the cowl. They're anchored in the back with random 3/4" buttons so that they don't pull against the yarn itself.

I just realized that none of these 3 projects ever even made it to my Ravelry projects page. That's how scattershot my knitting has been lately! For the end of the year, I'd like to finish my Tide Pool Pi and Rosebud shawls, as well as the Verbena yarn and perhaps the Sacred Tempest if it can stop driving me crazy. I have an idea about re-knitting the sleeves from the shoulder down so I can try them on as I go that might make it worthwhile.

But first, a project I've been sitting on for FAR too long. 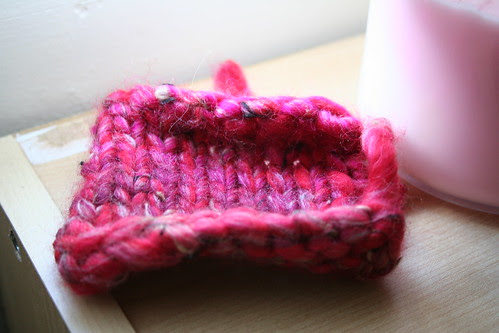