(Formerly) Crazy Sarah and I went to Disneyland in mid-July, where we rode rides
Watched the end of the parade:

Had (very strong) cocktails at Ariel's Grotto:
Did the obligatory posing next to statues:

And of course, rode rides:
We also took a day trip down to San Diego where we visited the incredibly talented Jackie Dunn Smith at Flying Panther Tattoo. I've been wanting to turn this image into a tattoo since I saw it at the Wild West Showdown in March, and Jackie took it and created this, which is even better than I had imagined: 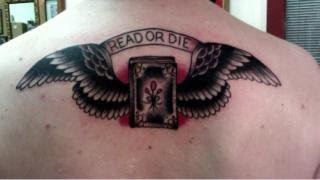 This was taken a few minutes after the tattoo was finished, so all of the dark looks black. Now that it's more healed, the book itself is a beautiful blue. I effing LOVE it, and I've been wearing low-backed shirts since I got it.
The trip was a lot of fun; I haven't done a Grown Up Disney trip in awhile and I had forgotten how much I like it. Here are the rest of the pictures; the crop of Crying Disney Kids was very low for some reason, but there are still a few for your enjoyment. I know I enjoyed it!
Posted by Anonymous at 12:41 PM