My internet friends! I have missed you! It's been a month and ::mumblemumble:: days, and in that time I have finished precisely NO knitting, so I blame my absence on that. There are several half-finished and even some mostly-finished projects sitting on my desk right now, but since I am a Gold Medalist in the Procrastination Olympics, I don't know when they will be done.

So what else have I been up to? I suppose I could show you my Hospital of Unfinished Goods. It's not a Graveyard as yet - after all, they're still on my desk in their little quilting cotton bags (thanks, Mommy!) instead of shoved on the top shelf of my closet like last years November Sweater*. We shall proceed in order of completeness, from least to most. It's more climactic that way.

These are the Primavera Socks (Ravelry link) from Natalja. They came about because I needed "cooler knitting" (according to THB) than the next project for an event I was going to. More on that later. During the event, I made it all the way down through the heel and about 3" onto the foot of the first sock, so they're about 25% finished at this point, or maybe a little more since the leg is 9" long before the heel starts. I've been experimenting with taller socks because I am now apparently fully a wimpy Californian and cry about 60-degree weather. The mind boggles! 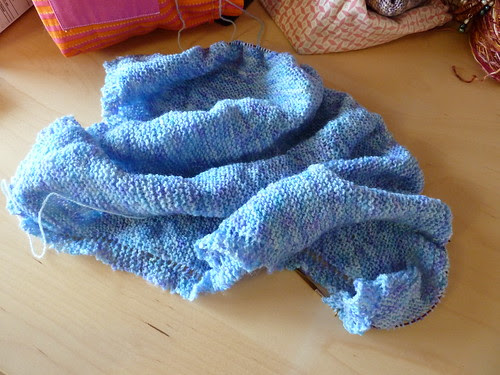 This is a plain Hap Shawl, or will be. I decided over the summer that a Hap Shawl was just what I needed, mostly because I wanted an excuse (HAHAHAHAH!) to buy a bunch of Dream in Color Baby lace yarn. And then it came and my Grand Plans for the color scheme were thwarted due to the deadly difference in real color vs. online color, so I just HAD to get two more skeins of lighter for the center (shown here) and now I have an extra 2 skeins of Baby in a periwinkle blue and a medium charcoal grey. I think I will make Wicked sweaters out of them for when it's not so damn cold in California...

This is my Hera Mountain Ridge Shawl, recently returned to me by my mother. I left it up there during a visit just after I posted about it, and she thought it was hers until she opened the bag (we have a lot of similar quilt cotton bags because she makes all of them. I am a lucky girl!). I think my Knitting Mojo was in the bag too since I really want to finish this now!


THIS is my Baby Bliss for Miss Evelyn's first birthday. In true knitter fashion, her birthday has come and gone and this is obvs. not yet finished. It is currently in the same state it was ON her birthday because I ran out of yarn and have to go stash diving to find something similar enough to sew on the second strap with. Sigh.

ETA: I sucked it up and finished this after I wrote this post! Wahoo! That's 365 yards added to my 12-Mile-Quest total.
And finally, the thing that's the closest to being done is my Silky Shetland Shorty, which is currently shoved in a bag in disgrace. I have ONE SLEEVE CAP left - about 15 minutes' work - but before I can do that I have to figure out how to stop the underarm from unraveling. ARGH. I think some knots and a little Fray Check will probably solve the problem just fine.

Obviously some of these pictures are old. I've been struggling with the light in this house since I moved in; it turns out a fancy paint job doesn't help with photography!

Let's see, what else has been going on? Mom and I went to the CogKNITive Fiber Retreat for the second time this year. We thoroughly enjoyed ourselves, and THIS time I brought home some yarns and some fibers! There aren't pictures (yet) but I picked up some gorgeous RedFish silk in tonal greys to make a shawl I can wear with my black dresses, some white alpaca lace from Alpenglow Yarns for something similarly pretty and warm, and a braid or two of Bee Mice Elf for the spinning I haven't been doing. A couple of highlight pictures:
And finally, we come to the aforementioned Event. I tend to be a diver - that is, I decide I want to do something and I don't really research it out first - and this was no exception. At the end of September, I was looking up dates for the next roller derby bout in my area and discovered that there was a Derby Boot Camp scheduled for 10/10 where the derby girls would teach us how to skate! So I took THB and his girl, Friday (see what I did there?), down to the newly-opened local skate shop and got myself a pair of bomb skates, some pads, a helmet, and headed out to learn how to fall down on roller skates. The other local team's tryouts were for 10/17, so I went thinking that if I didn't make it, it was no big deal - the Boot Camp team's tryouts were in January. But I DID! And now I am part of the newest Fresh Meat class for the Sacred City Derby Girls! I am ecstatic and so ready to get on skates next Monday to start my training, you have NO idea!

So that's the state of things. THB, Friday, MyNadia and HerHusband and I went to the Sac City Roller Girls v. Bakersfield Revolution last weekend, and it was GREAT.
I thoroughly enjoyed myself, and  I cannot WAIT to play some derby. Expect catalogues of bruises in the future!

To finish, here is an adorable picture (though I say it myself) of THB and Mr. Darcy. Awwww! 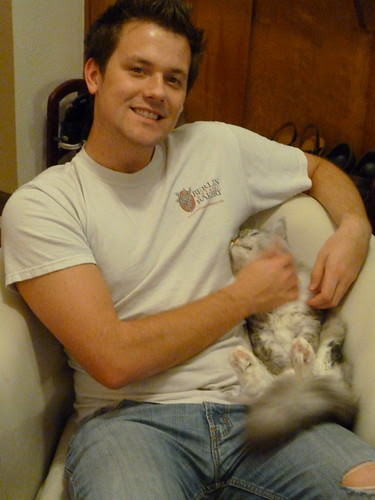 *The astute among you will notice that this is from 2008. I didn't even blog about Salina last November, despite trying to finish it. This November's not looking good either. Sigh.
Posted by Anonymous at 3:25 PM