Because my classes are in the evenings, I tend to go to sleep late, wake up late, and play a lot of video games. I've been playing World of Warcraft with some dear friends since the game started in 2004, and it's really easy to just log in for a minute or two and get sucked into several hours of laughing and pwning with a group of buddies.

Thus I have dubbed today "No WoW Wednesday." Well, today and every other Wednesday. While I don't log in every day - or even every other day - having a specific day seems to keep me more motivated to do other things.

I've also started logging off when my 9-5 friends do instead of staying up with the late night crowd. That means I'm out by 10 or 10:30 and have an hour or two to listen to audiobooks and knit. It used to be that I would either knit or play WoW in a day, but now I manage to do both.

Time management is not my strong suit, can you tell?

Anyway, since I added 4.7 MILES of yarn to my yearly total at Stitches 2010 I've felt a little pressure to start chipping away at the Stash Equilibrium Goal, and by default also at the 12-Mile Quest. Thus I present my Peasant Rib Socks: 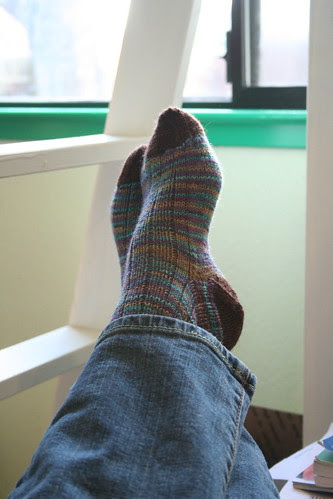 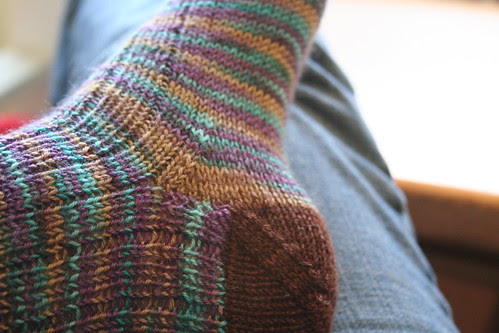 It's relatively successful. However, these are only 56-stitch socks, and I don't really like the way they are so stretched on my leg. I'm debating either a smaller needle/larger cast-on combo, or perhaps a 60-stitch cast-on and then decreasing down to 56 stitches after the heel. I think I'll try both. Additionally, I think I'm going to knit with the extra picked up stitches for 1/2" or so before I start to decrease. (At this point, the non-knitters are rolling their eyes and the knitters are nodding in agreement. Such is the lot of those not involved in our obsessive, math-oriented hobby!)

What I really like is the contrasting heel/toe, especially because the peasant heel construction allows for replacement. I don't wear through my socks very quickly, but I like the option of replacing the heels should I snag them on an unfriendly shoe. And because my feet are fairly small - a 37 EU/7.5 US - I actually managed to squeeze this pair out of ONE skein of the main color sock yarn. That means that with a little tweaking, I could reliably get two pairs of plain socks out of 100g of yarn plus the contrasting color, leaving me with very few leftovers. The perfectionist in me is utterly pleased by this potential development.

In other news, THB and I watched The Informant last night. I thought a lot about this movie afterward and came up with a few notes:
Next up is Brigadoon (1954), in Cinemascope no less.
Posted by Anonymous at 1:48 PM

File Under: 12-Mile Quest '10, a goal is a wish your heart makes, if only life were like the movies, patterns are for sissies and also for me, set those needles free