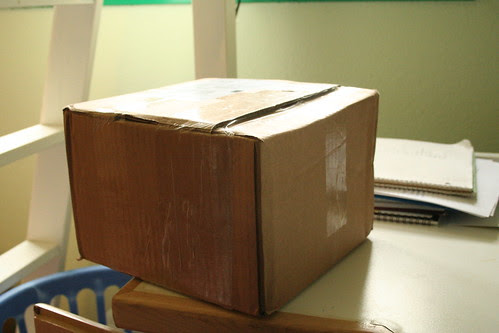 Okay, maybe you will. 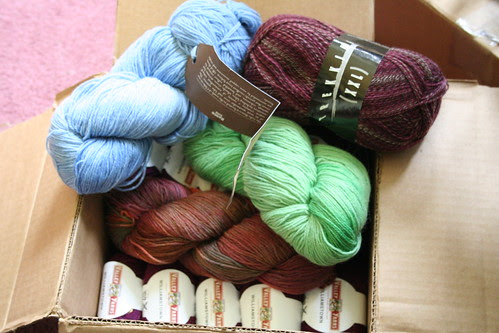 1.69 more miles to the "IN" total...
I couldn't help it! Omly wrote about how awesome Trekking XXL is, and I discovered that I don't have any for socks in my stash (shhh - those 3 balls are for a Tempest!). And then there was a sale going on at WEBS, which is kind of redundant as there's ALWAYS a sale at WEBS, but again, shhh! And the purple Williamstown I've been ogling for over a year was on sale, and I love my Ribbi Cardi out of the same - it's the best house cardigan! And the Araucania was pretty and cheap, and did I mention it was 1:30 in the morning at this point? Don't tell me you've never succumbed to the late night siren call of Yarn via Internet. And if you haven't? Shhh!
There has been progress on multiple fronts lately. I got halfway through a massive stash reorganization this weekend. 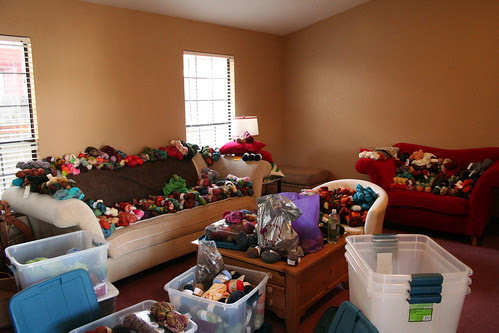 Those empty, lidless bins on the right were labeled with a big letter on the front, and THB acted as secretary while I called out which yarns I was putting into each bin. He also managed to lay claim to two skeins of Very Nice yarn - one for his hands, and one for his feet. Thankfully he hasn't asked for a sweater (yet...)! So now I've gotten another good look at my stash - or at least, the sock and lace yarn that make up the bulk of the stash - AND there's an actual catalogue of what is in which bin. I am thrilled about this, because the bins are all tucked into my tiny room and hauling them out one at a time is kind of a pain.
The next step is to get some space bags for the (many) bins of roving to compress the stash a bit, and then finish the overhaul.
There has also been knitting progress! I'm up through row 82 (of 180) of my cousin's Lyra wedding shawl: 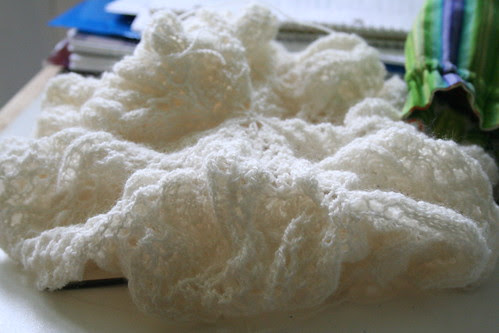 Herbert Niebling's Lyra, Knit Picks Merino Lace "Bare"
I've been pretty diligent about working on this, despite the fact that I can't take it anywhere. The pattern strictly an audiobook one, so it sits next to my desk and glowers at me when I spend my time playing video games instead of knitting!
I also finally pulled out my ill-fated Mingus socks and started instead on some 56-stitch No-Purl Monkeys: 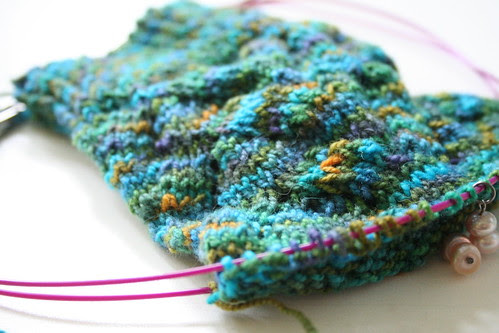 No-Purl Monkey Socks, Lisa Souza Hardtwist Petite "South Pacific"
This would appear to be my favorite pattern, as this will be the fourth pair I've made. I really do like the way the pattern fits my feet, and it's easy and elegant without being fussy. It's a good thing I pulled these out, as I start my third round of grad classes today and will definitely need something to keep my hands occupied while I learn more of the semantics of teaching!
One of these days I'll have a finished piece to show you, I swear!
Posted by Anonymous at 3:39 PM