There Is No Try

Yoda's maxim has seeped into the lexicon of my generation, and I find it occasionally frustrating, occasionally useful, and always true. Therefore, I present you with my Olympic "Do Not."

Here is how far I got on my Olympic Stonington by last Sunday - halfway through the Knitting Olympics: 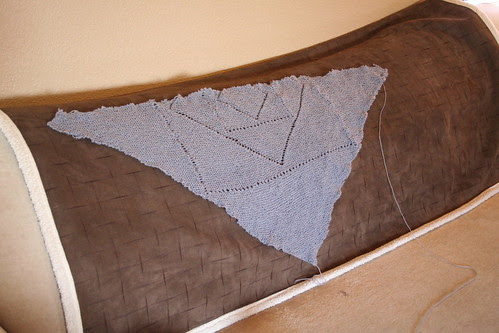 It is at this point I decided that no, I canNOT live with the edge treatment here even if I'm going to pick up and knit around the edges and it won't really show. I would know, and that's unacceptable. In more knitterly reasoning, I'm creating a diamond-shaped center for my square shawl, and if one half of that center has a looser edge than the other, it will hang and stretch funny.
So here we are, back to the first half of square one: 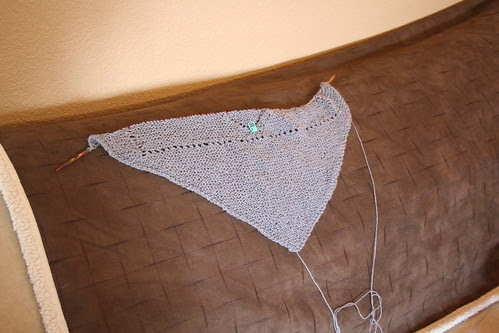 See the difference? It makes me breathe a sigh of relief. I freely admit that I've been slacking on my Olympic project. In my defense, grad school has been tougher this session and I've been busy running all over the place. I haven't spent a weekend at home since the end of January, and won't until the end of March. Mr. Darcy is getting quite put out with me!But the last two weekends have been spent in great enjoyment and ::ahem:: procurement. My student aid finally came through, and I may have bought a little yarn. Really not a lot, comparatively. 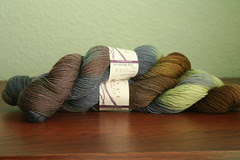 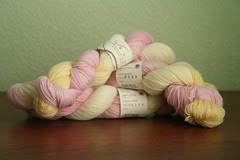 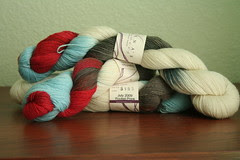 "Rocket Pops" x3 (more knee-highs!!)
I do love me some Lorna's Laces! And yes, that comes in at just under a mile - 1720 yards. I also got my hands on 5 skeins of Panda Silk in black for the edge of the Olympic Stonington, so that total goes up to 2740 yds, or just over 1.5 miles. I'm not certain I'll need that much black for the edging, but this thing is looking like it'll be pretty huge and I'd hate to have to skimp on the edge treatment. I ended up having to buy the Panda Silk on the internet, despite having called three LYS's and two in San Jose! Everyone seems to have put their stock on clearance; I really hope that Crystal Palace isn't planning to discontinue this yarn. It's just so lovely and drapey and, well, silky. Even the online stores didn't have much left and I had to wait a few days for the new shipment to come in at Jimmy Bean's. Luckily that wasn't a problem (see above re. slacking, busy).

As far as the 12-Mile Quest 2010 goes, I think I'm going to attempt to maintain Stash Equilibrium over the course of the year. The above yarns are the the only (yarn) thing I've bought since my trip to Portland in November, so it'll be easier to keep track this year than in years past. Ahem. Spinning-wise is a different story, but more on that later. I'm adding a note in the sidebar about yards in compared to yards out; it'll be interesting to see how that works out by December. This coming weekend at Stitches West will be the big stash-enhancer, although I'm feeling very sanguine about my stash at the moment and don't really feel the need to enhance much. Famous last words.

I finally sewed the buttons on to this and breathed a sigh of relief. Mom and I are going to see Miss E and her parents this weekend, so I'm excited to bring her more handknits! She's such a cutie. Don't worry, there will be pictures!

And speaking of pictures, here's what I've been up to lately: 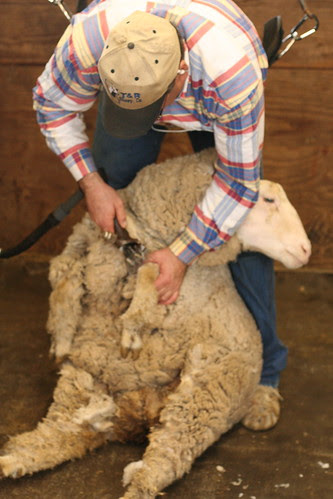 Sheep shearing! It was totally fun and really informative. Back at Retzlaff in June, I had a conversation with Sue Reuser about how to get my hands on a few of her fleeces without having to pull hair or get up at 5am. She mentioned that she shears in February and that people who are at her barn usually end up with first pick, so I signed on right away for that little adventure! Sue's cormos are famous in the handspinning world for their softness, crimp, and beauty; her house is chock-full of trophies and awards, and rightfully so!

The first weekend, Mom and I lasso'ed my stepdad into going by telling him that it would be fun, but NOT telling him what he would be doing. He figured it out about halfway to Sue's, and I'm glad to say he had a really good time. Well, ALL of us had a really good time. We met some amazing and amazingly knowledgable people and were generally merry all day. My only complaint was that all the sheep we skirted were white, and I'm not really all that into white fleeces. I think that if I'm going to spend the time and money to wash, draft, spin, and knit a fleece, it should be a pretty color! Although I have to admit that a few of these whites made me consider changing my mind. 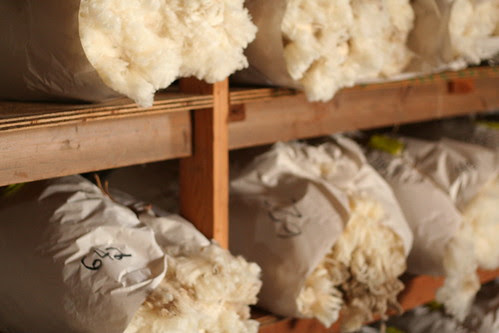 Luckily, AuntieSocial and I had a plan to head up the next weekend, which was dedicated to the colored sheep. And oooohhhh, boy howdy, were they ever gorgeous.

Some of you may recall the Monterey Wool Auction of 2008, in which the incredible (and sadly internet silent lately) Aija went on a very successful Fleece Mission. I'm pleased to report that Henna is still alive and well, and her fleece is still as gorgeous as one would hope - if a little lighter: 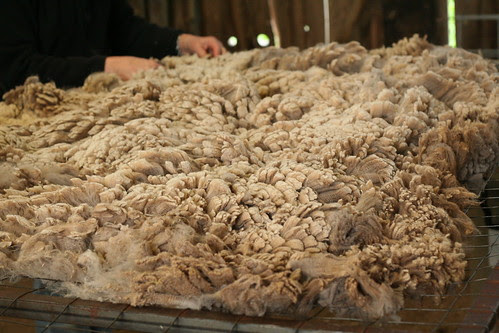 The outside of Henna's fleece
She's a big girl - after the shearer skirted off the particularly objectionable bits (belly, behind, face, leg, etc.), her fleece weighed in at 8.1 pounds. I immediately entered into negotiations with Sue to take it home with me on the spot, although I tried hard to believe that if she wanted Henna's fleece to go to a show, I would be willing to wait. 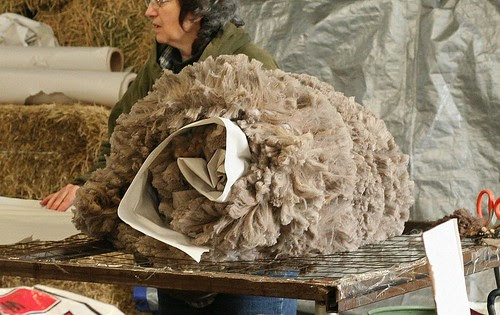 Inside of Henna's fleece, skirted to 6.5 pounds

Now, I've been on the prowl for the Perfect Honey-Colored Fleece ever since the '08 auction, and so far it has eluded me. No longer! And I'm doubly chuffed because of Aija's success with this same sheep a couple of years ago. My plan is to blend a pound (or two...) with about 20% Tussah silk and spin it frog-hair fine for a Shetland-style Wedding Ring Shawl. Of course, said plan has only gotten to Step One: Find The Fleece, and at this rate will be done when I'm about 75. But no matter!! Sue let me bring The Fleece home and it's now residing in my garage in easy view so I can poke my head in and look whenever I want.

I may have also brought home an equally lovely lavendar-grey fleece that kept catching my eye every time I walked into Sue's shed. The picture isn't ideal, but the moment the sun comes out I'll take it outside and get a good shot. This is one of those things that snuck up on me - it was on the shelf the first week I was at Sue's and I kept going over to look at it, then walking away thinking, "I don't really want a grey fleece..." I'm pretty sure I did that about 10 times the first day and probably even more times the next weekend. Finally I caved and pulled it off the shelf - just to look, mind you - and that was the end of that. If I had left it on the shelf, it would have haunted me, I just know it.

And now you know why I'm not counting spinning fiber in my Input/Output tally. I definitely have more fiber than I need, especially since I haven't been spinning at all lately. But I'm also sated and happy and utterly thrilled with my two gorgeous fleeces. Perhaps they'll help push me back into Spinning Mode! And if not, there's always next year's fleeces... 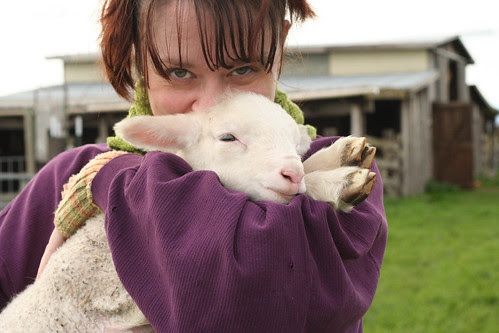