Just a Bit of Knitting

For whatever reason, I haven't been knitting lately. Partly because of some fundamental shifts in my space - moving to Roseville, making new friends, grad school, none of said new friends being knitting people, etc. - and partly because I've been trying a new thing: knitting monogamy. I've gotten frustrated with the number of unfinished projects looming over my head, so I've been slowly trying to finish things up. Interestingly, this has caused the sheer volume of knitting to go down, possibly because some of the projects aren't as portable as others.
This means I'm clearly NOT going to finish the 12-Mile Quest this year, despite my best efforts during the first 6 months of 2009. But in the spirit of working through my 101 in 1001 goals, I am going to shift my focus and try to finish at least my Salina sweater before the year is out.
To this end, I give you some sleeves: 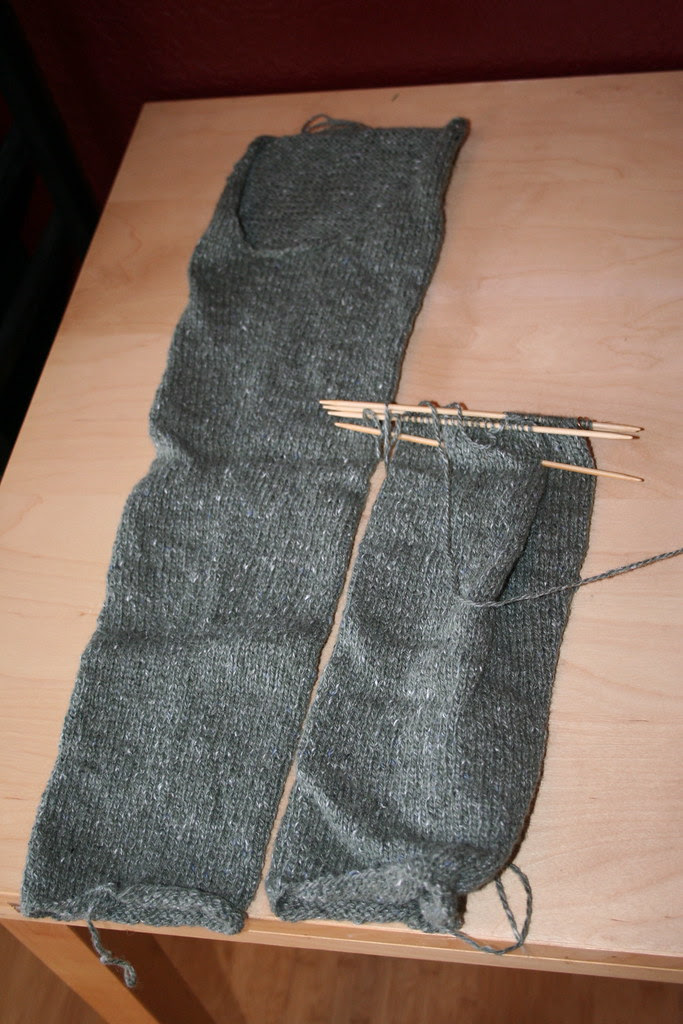 Roughly 1.5 sleeves, to be exact. After the second sleeve is complete, I just need to complete the front half of the sweater (already more than 1/2 finished), then knit the collar and set in the sleeves and I'm done.Well, almost done - I am pretty sure that I'm going to have to pick up the bottom edge of the sleeves and add about 2" onto them due to my monkey arms. Sleeve knitting is one of two times I bemoan my long limbs; the other is when my new jeans, which have been deliberately purchased to drag on the floor by 3", shrink up to my ankles. Lest my shorter friends poke fun at me because their jeans are always too long, allow me to remind you that you all can get your pants hemmed to the perfect length for about $9, while I am doomed to look like an afficionado of the 80's highwater pants era.

Anyway, sleeves. They're nearly done. And after that, I have a pair of socks that are about 25% finished out of this yarn, which is another colorway of this yarn that made these socks, which I am currently wearing. And then there is the blocking of my Shield of Bees shawl - did I mention that the same day I got my $20-worth of T-pins in the mail from WEBS, I also found my other boxes of T-pins, thus making me the T-pin Queen? Other unfinished projects, according to Ravlery, include:

*Mingus Socks (need to rip and re-start according to original pattern; why the Koigu version was miles too small and the current version is miles too big is beyond me.)
*Norfolk Ramblers (must take picture of Welsh Heel Disaster '09 to send to Emma, then rip and figure out WTF is wrong with my pattern-reading skills)
*Very Happy Scarf (need to rip edging and find another smaller treatment for same. Beginning to recognize a theme here...)
*Honeydew BSJ (sew. on. the. damn. buttons. Will probably take 15 minutes and have been procrastinating for almost 3 months.)
*Great Bebeh Project (perhaps am in the right place for miles upon miles of garter stitch, finally?)

Not being a masochist - at least, not a KNITTING masochist - I don't expect all of this to be done in the next 18 days. But I bet I could finish at least the Salina and the red socks, which would mean I could wear them to my final class of the session in early January. My classmates would get a kick out of seeing me wear stuff I've been working on since October.

And speaking of masochism, I had a great weekend in the East Bay and Menlo Park. Well, a great 24 hours - South Bay friends, don't get out the pitchforks! My step-grandmother was in MP for the weekend and I went down with my Other Brother who lives in Alameda in order to brunch with her. On the way there, I spent Saturday night partying in downtown Alameda with a new friend, Malia, whose name endeared her to me immediately because the only other Malia I know is my beloved soul sister in Oregon (Hi 'Bean!). I didn't run into the kissing stranger from last weekend, but if he's meant to turn up, he will. Like a shiny penny, or something... In the meantime, New Malia knows a LOT of people in Alameda, and has undertaken the amusing mystery.

My life is often like a soap opera, have you noticed?
Posted by Anonymous at 1:29 PM

File Under: 12-Mile Quest 09, friends are the new family, procrastination is tomorrow's spice-of-the-day, the impending doom of holidays