I've learned that it takes me a few days to settle after a big event, no matter how long said event is. Stuff needs time to percolate down through my brain, which means that my blog posts and podcasts about events are usually put up later than those of other people. However, I console myself that mine are just extra-awesome because they remind people about something they had begun to forget. See what I did there?
Last weekend was the CogKNITive Fiber Retreat in Tehachapi, California. This tiny little town is highly amusing, and was in turn highly amused to have 50+ knitters descend upon it. We had a fabulous time. 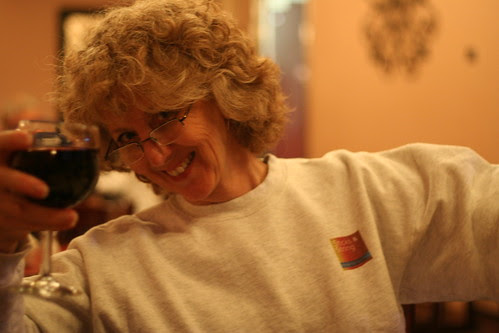 I met some lovely people, got to hang out with Jasmin and Gigi (always lovely to see familiar faces!), and once again took only pictures and left only footprints. That's right, kids; I bought NOTHING at the market, despite the combined temptations of Bee Mice Elf and Red Fish Dyeworks. Somehow I missed Red Fish at Stitches this last year, and I'm highly disappointed that my first experience with them was when I'm financially impotent. But I was assured by the adorable purveyor that they are getting what will probably become my Forever Yarn by Stitches '10, by which time I intend to have more money even if I have to steal it. It's that amazing, y'all. 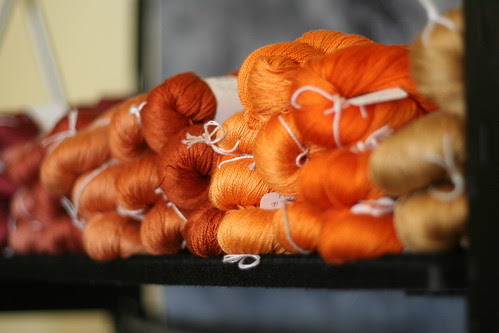 Anyway, above-pictured (the person, not the yarn! That's Red Fish.) is Eileen, whom I would like to have as my constant genius female companion. She reminded me of the kind of woman I want to be: confident, elegant, and strong. You can't see it, but she's holding an extra glass of wine in her other hand, just because. Yep. My kind of woman.

This is Dr. Gemma: 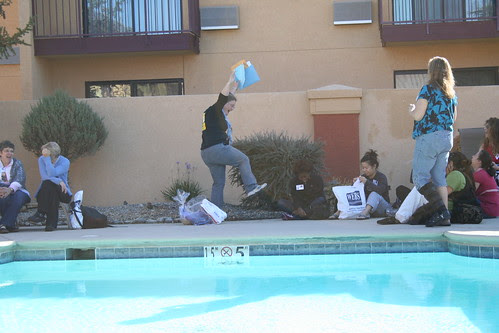 Everyone needs a little Floating Crane in their lives!

Eileen, Jasmin and I stopped at this aMAZing little coffee house called Mama Hillybeans. The whole place was just one significant glance after another. They have a great menu, a community garden in back, a koi pond inside, regular shows with big-name bands, the occasional wedding in the garden, a to-scale teepee outside that (were we living 150 years ago and also Californian Indians) would have been our homes, and this: 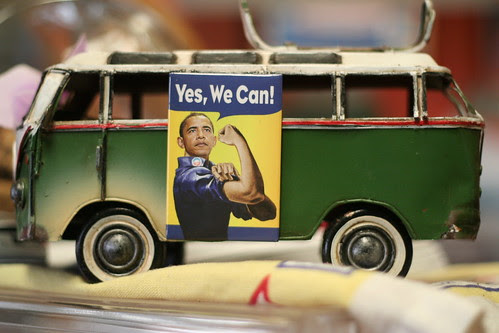 Yep, that pretty much sums up Mama Hillybeans, except that I forgot to mention that the coffee was also very, very good. Double bonus.

I got to meet Laurs from Bee Mice Elf (Hi Laurs!!!), who apparently did really well at the show despite my neglect of her wares. I'm so thrilled!

Other than shopping, drinking wine and visiting coffee shops, I took a class from Jo in drop spindling and taught a class on Judy's Magic Cast-On, which was really easier than it sounds. The thing practically teaches itself; I took a leaf out of Cat Bordhi's book and taught it to groups of 5-ish people who stood behind me. It worked out well.

I also got a BUNCH of prizes! Some gorgeous lavendar soap/bath stuff for being a podcaster and a teacher (I knew podcasting would get me something someday! Hahah!), a book that I traded for another book that I then traded for some Freckleface Fibers roving in the just-for-the-retreat Tehachapi colorway, and 3 skeins of Noro Kureyon. I know; quite the haul, eh? None of which I have photographed, but trust me: awesome.

I have other stuff to talk about, like the KAL socks being 25% done, very little crafting going on, and starting grad school at the end of the month, but it'll have to wait for another post. In the mean time, here're the rest of the trip pictures. Enjoy!