It's that time of year again, and I got sucked into joining the TdF; this time I won't burn myself out on spinning so badly that I don't spin again for 6 months.

Despite my concern about burning out, I have indeed joined Abby Franquemont's Team Suck Less, in which our ultimate goal is to... suck less by the end of the Tour.
I'm currently working on another roving from the Black Bunny Fiber Club, this time a cormo/corriedale cross in gorgeous blues, greens and purples called "Asti." I chose it because I think the wheel still needs some breaking in and I didn't want to start on the gorgeous 100% cormo pindrafted beehives I got from Sue at Retzlaff this year until the wheel is ready for some frog hair yarn. However, before I get into specifics on the current project, I have some spinning FO's!

I have finally completed, washed and set the 2 ounces of Easter Egg colored Merino/soysilk roving that Jasmin bought from A Girl on the Rocks last year at the Color Fiber Festival. The other two ounces have lived in the bottom of my spinning bag for just about the entire time; I am apparently not so much a soysilk kind of girl. But here is the yarn I did finish: 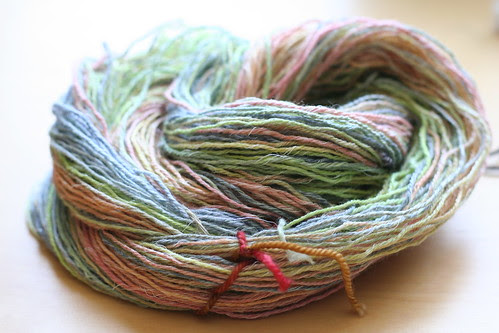 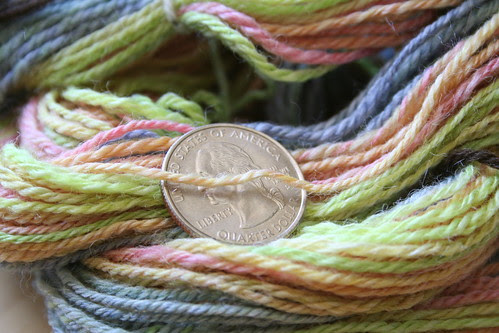 Easter Egg 2.0, chain-plied merino/soysilk, 64 yds.
In retrospect, I should have chain-plied it all without the sparkly thread and had one ~230 yd skein, but I didn't so I'll have to come up with something to do with each skein separately.

I also finished the Begonia 2.0, which was the second half of the Begonia 1.0 from the Black Bunny Fiber Club. I used this roving to break me in to the new Matchless and to attempt to break me OUT of the habitual weight of singles I've been spinning: 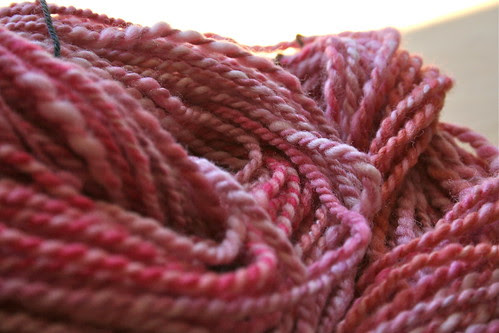 Begonia 2.0, superfine merino 2-ply, 104 yds.
The exercise definitely helped; I'm charmed by the chubby, bouncy 2-ply I created, and I'm feeling much more comfortable with using the double-drive on the Matchless. 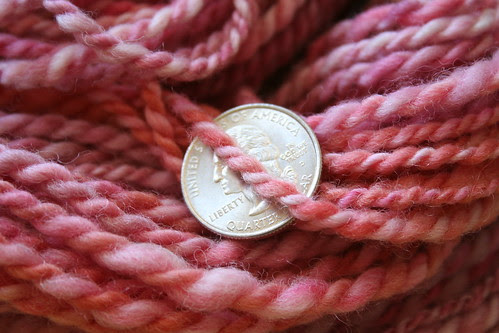 So, back to the Tour de Fleece! Originally, I had no plans for the 4th of July. Then Jasmin and I mentioned in passing that we should watch 1776 on Independence Day, and I added that I would bring steak if Andrew would grill them, and the whole thing was off to the races. In all, about 20 people probably showed up to Jasmin's for beer, steak, corn-on-the-cob, spinning, and one of my favorite cheesy musicals. 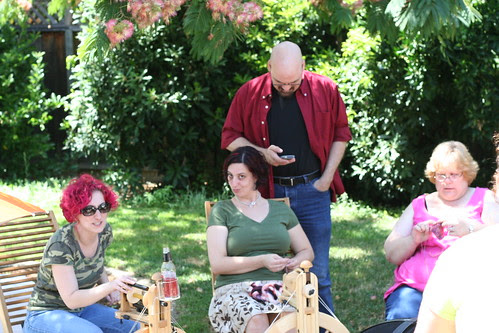 We spun out on Jasmin's patio to kick off the Tour, and over the course of the day I managed to finish the first bobbin of the Asti roving I've been working on. 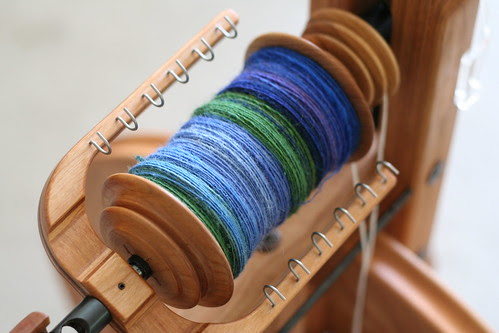 I also got a fanTAStic graduation present from my dear friend Colleen, who is possibly the wisest person I have ever encountered. If this were the Middle Ages, she would be one of those Wise Women who are in danger of being burnt at the stake for their deep understanding. Thank goodness she lives in the 21st century instead, where she can dispense her genius (and largesse!) without fear of reprisal. 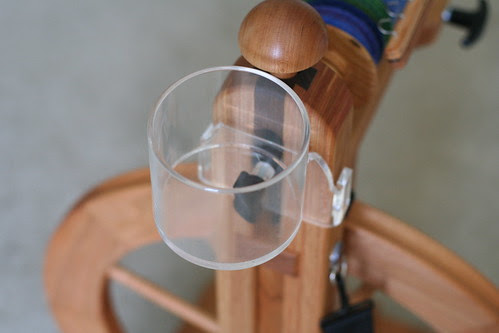 A cupholder for the Matchless (who really needs a name)! I'm completely thrilled! She also gave me some beautiful merino/tencel from Abstract Fibers that I'm probably going to hoard because it's just so lovely in the bump.

That's about it for now, except for the announcement that I'm moving up to Roseville in September to live with THB and his friend Mac in THB's very own house. Thus, posting may be a bit sparse as I focus on paring down a 3-bedroom apartment's-worth of stuff into a single bedroom. I'm not good at giving up material items, but it is definitely time to go through boxes and pitch a bunch of crap I've had lying around for years "in case I need it." 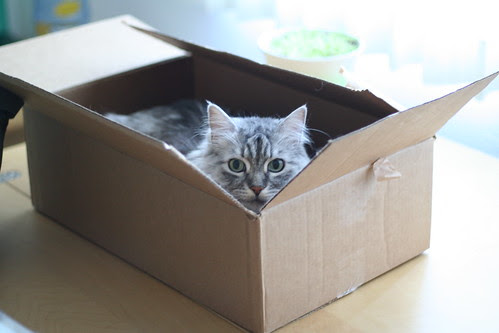 Darcy only approves of emptying out boxes so he can lie in them.
Posted by Anonymous at 12:51 PM

File Under: friends are the new family, Tour de Fleece 09, you spin me