Yesterday morning I woke up with that feeling you get when you're not Really Sick yet, but you can tell that The Sickness is coming. Of course it happened on a Monday, and of course it happened on the day when I started my second job at the Visual Resources Library - formerly known as the Slide Room - at the University. This morning, the oddly-colored effluvia started, and now I'm fairly certain I'm In For It. Between the Emergen-C and the chicken soup, I'm hoping to stave off the inevitable day of laying on the TV room couch and whining to ManCandy for more soup until the weekend.
Last weekend, Jasmin and I went to Commuknity to take advantage of the closing sale. It felt a bit like picking bones, especially because I had never been there before, but I made good choices and stocked up on yarns I will definitely use. In fact, I've already started; on Sunday I finished a pair of Jacoby mitts out of a single skein of Claudia Handpainted. They're perfect, and I've barely taken them off to wash them. There are many more of these in my future, I can tell, although I may re-write the pattern to make them top-down so I can do two at the same time and have no leftover yarn.
I also finished the Hated Manos Scarf. Aside from the intended recipient, I dislike pretty much everything about this scarf. I bought the yarn back before I knew about dye lots, so the two halves are slightly different from one another. In the Seeded Rib pattern it didn't show so much, but when I tried to make a My So-Called Scarf out of it a million years ago, there were weird pooling issues and I ripped it out about 6 times because in addition to not knowing about dye lots, I didn't know that there's no fixing dye-lot related pooling.
Also I'm not a fan of the yarn itself. I find Malabrigo to be softer, more manageable and more consistently spun, and while the colors aren't as intense, I'm definitely willing to deal; after all, I'm the only one who was in the yarn shop looking at the two side-by-side. Gift recipients won't ever know the difference.
There are no pictures as of yet for the Pistachio Mitts or the Hated Manos Scarf. It turns out that when you have to be at work at 8:30 am instead of 1:30 pm, there is no time in the morning for taking pictures in the 9am light. At least not so soon after the solstice. However, there's an "in progress" picture of the HMS that looks like the finished object, so here you go: 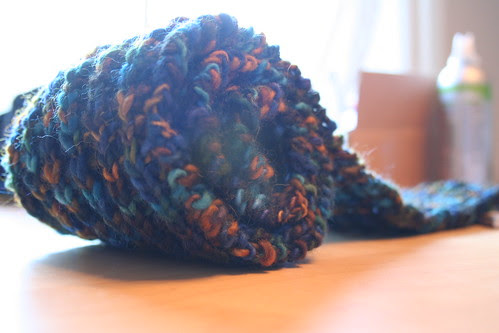 Hated Manos Scarf, for Unka F.
270 yds.
I'll try to get pictures shortly, but in the mean time I'm trucking away at Seeded Rib Scarf #6. Only 1.5 more to go!

Posted by Anonymous at 7:52 AM