Let's see. I have pictures and FO's and yes, the embroidery pictures. But first, a confession that will shock no one: I have failed at my 12-Mile Quest for 2008. I tried everything from knitting faster to squinting sideways, but there wasn't any real, practical way to get my tally up from barely starting Mile 9 to over Mile 12. That, my friends, is three sweaters, or 12 pairs of socks, or one really scary Wedding Shawl. None of which are feasible between now and oh, 10 days hence.

So, on January 1, I'm starting over. I'm going to maintain my attempt at having reasonable expectations for myself, and say 12 miles for the entire year of 2009, instead of getting to September and realizing that I need to extend my goals. There is a stress point at which I operate perfectly - there's just enough pressure that I feel motivated, but not so much that I throw up my hands and admit defeat. Next year will be about trying to nail down that stress point more clearly so that I can be more productive but less agitated. We'll see if that works...

I'm also debating between 2009 as the Year of Lace or the Year of Socks. Mostly because I'm graduating in May - surely you've heard - and if I move it will be to somewhere colder than the Silicon Valley, and I will need more hand-knitted socks if I intend to survive. Which I do - if only to avoid passing my student loan debt onto my parents. Anyway, these are the things I ponder when I don't have slide tests to cram for or papers to whip up.

Yesterday I finished up this little beauty: 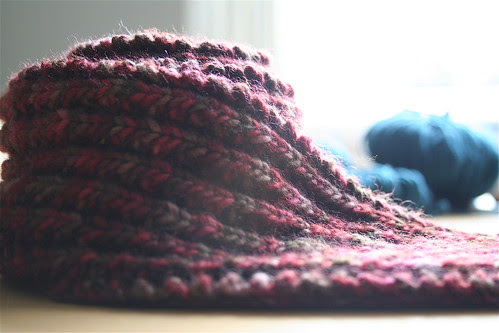 Seeded Rib Scarf #2, Malabrigo "Stonechat," 215 yds.
It'll be for Grandma M. Next up is a Seeded Rib Scarf #3 out of Malabrigo's "Indigo" for my Aunt C.; I've discovered that I'm quite fond of how the seeded rib looks, so that's the theme for the rest of the Christmas and King's Feast scarves. Only one more for Household 2!

In between Alexander's Hat and the Seeded Rib #2, I made a hat for ManCandy in Michigan colors. Neither hat is in my possession at the moment, but they're pretty standard hats, and based on the weights of the Veteran's Hats I made this summer should be around 120 yards, so that's what I'm putting for each. Which brings today's 12-Mile Quest total up to 455 yards; not that I'm counting so much at the moment, but maybe I'll finish up Mile 9 before the year turns.

In other news, here are the embroidery pictures: 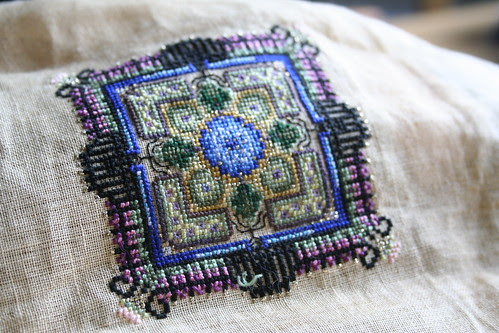 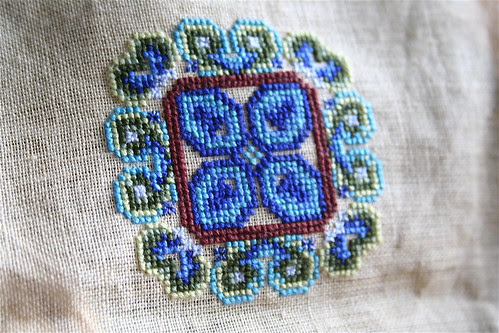 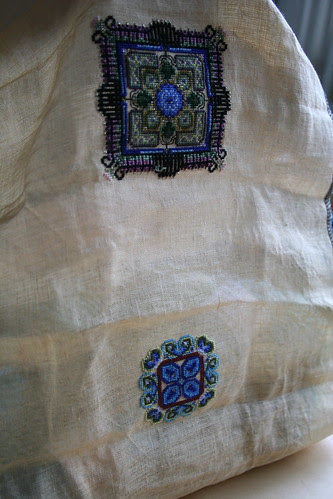 Sort-of comparative sizes.
Ultimately there will be 3 mandalas on the rectangular piece of fabric, all pretty much the same size (about 5" square). Currently the first one is about 4" square and the smaller one is about 2". In terms of time commitment, I had completed about 95% of what you see in Mandala #1 before I decided to use this as my art project for school, so it only took about 2-3 hours to get it to where it is now. Mandala #2 represents about 40 hours of work up to this point, and I left out some of the filler in favor of overall size. The mandalas themselves were designed by Martina Weber, who is a gifted artist in terms of her embroidery work. I have several of her designs stashed away, waiting for the whim to overtake me. She prefers to work in silks and beads, which are beautiful but also expensive, and so I don't have many of her pieces kitted up.

The piece is being worked on 40-count linen over 2 threads, which means that instead of each cross stitch taking up only one warp/weft pair in the fabric (+), it takes up 4 (#). Therefore, there are 20 stitches per inch on the fabric, which means I need quiet, a big chunk of time, and good strong light to work on this. It is, to say the least, rather time consuming.

Happy Holidays, everyone! I'm off to finish reveling in my only day off with no one in the house. I think I'll celebrate with a glass of wine and some television. And, of course, a Seeded Rib Scarf. 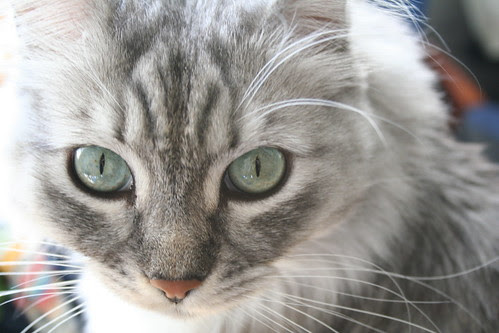 Posted by Anonymous at 3:38 PM