Oh yes, cheer in exultation, my friends. Today you get TEN minutes worth of information instead of the usual FIVE. I know you're excited.
Knitting. There has been some - quite a bunch, really. I stopped doing the November Sweater thing when I realized with a panic that I can't make some people in my family handmade gifts and simply buy things for the rest; my family is all craftsy and artsy, and they know the difference in time/thought commitment between handmade and store-bought.
After several tries, the Buffalo Soldier 3-ply I spun up awhile ago became a scarf in short order - 2 days of knitting and my dad has a Christmas present: 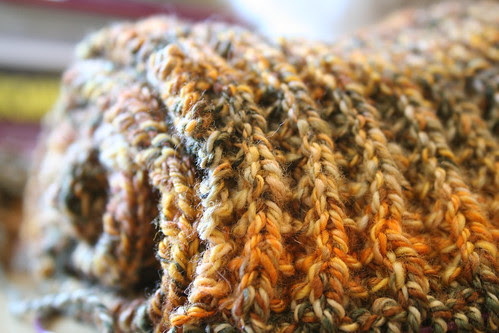 Seeded Rib Scarf, CMF "Buffalo Soldier" 3-ply, 233 yds.
That's a Seeded Rib pattern from Barbara Walker's Second Stitch Dictionary. I have come to the conclusion that I need to knit with more handspun. Jasmin will get all "I told you so!" in the comments, and she's totally right. I need to spin more so I can knit with more handspun, because it's utterly charming. I was more pleased knitting up this little scarf than anything I can think of recently, except for Jessie's hat and scarf... which are also made of handspun. Oh, and my stepmom's shawl - ALSO handspun. Two incidences make a straight line, but three is a trend, as my engineer father is wont to say. Clearly I need to bust out the Sonata more often.
Here's another shot just 'cause I'm so chuffed about the scarf: 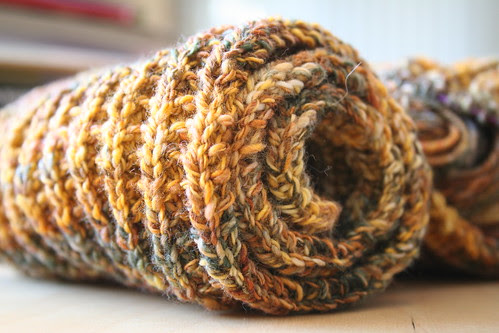 Last weekend, I was off on both Friday and Monday as the Relatively Normal's had a bar mitzvah to attend in New York State. I had planned to spend the weekend drinking wine and enjoying the first weekend of the newest World of Warcraft expansion, but I was thwarted when my father called up and asked if he could fly me to LA to spend time with him. I admit freely that I was a little bummed - my dad and I have a rocky relationship, and I had planned my long weekend out to the hour, including time for school projects and going to pick up dinner to eat it in front of the computer screen (can't sit at a restaurant! must level!). But filial duty is a strong part of my nature, and I knew I'd enjoy myself once I got there.
My dad's college roommate, Sam, was docked in San Diego, so Papa picked me up at the airport and we headed down there to see him and his family. Sam is a character; his family is independently wealthy due to some clever choices in the early part of the 20th century, but he hasn't ever used the money except as a potential safety net. Instead, he buys derelict yachts, fixes them up, then sells them again - but not before sailing them around the world to "make sure they're ship-shape." Needless to say, the man has more stories than Grimm's. I spent an exceedingly pleasant weekend learning about boats, visiting the Maritime Museum and the San Diego Zoo, and learning how to navigate in the world of traveling people. I took a bunch of pictures, and you can see them here; although as of right now not all of them are up on Flickr yet.
That's the end of my 10 minutes, but I also finished a pair of socks for Gabe's Christmas present - ~400 yards of Regia 4-ply. Pictures to follow!
Posted by Anonymous at 1:00 PM