This weekend my stepfather was away from home and I had very few plans, so on Friday morning I hopped a train up to my mom's house for a weekend with just the two of us. We haven't done anything like this since I-don't-know-when, and it was just the perfect amount of time to spend together before we got on each other's nerves. On Thursday night, I had a crisis figuring out what crafty stuff to take, and ended up taking pretty much everything: 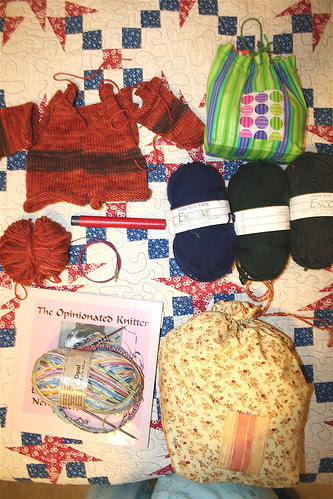 For those keeping track at home, that's (counter clockwise) the completed-but-not-blocked-or-seamed Theodora Sweater, yarn with which to seam said sweater, the BSJ and book, the also-completed-but-not-blocked-or-seamed Ribbi Cardi, Veteran's yarn, and the Baby Mama Shawl. In the middle are sundry cables and needles for transforming Veteran's yarn into Veteran's Hats. That, my friends, is enough project to last for MUCH more than the 48 hours I ended up spending with my mom.
But train knitting is good for the soul. 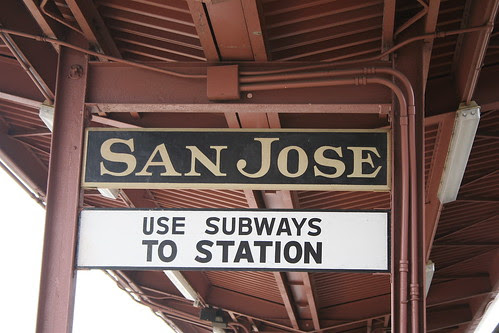 I knitted on the platform and played with my fancy camera, 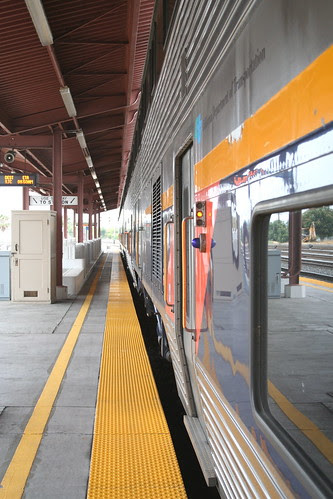 I knitted on the train and made it through several inches of the Baby Mama Shawl, but no pictures as of yet. Mom and I also stopped at her local fabric store, which had just moved into a bigger location. Much of the fabric that used to be in the back room is now on display, and I succumbed to the siren call of $2/yard cotton: 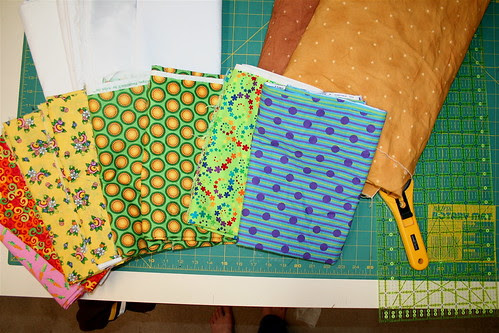 Much of which became this later in the evening: 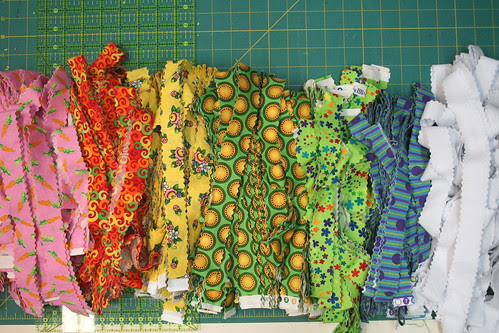 These will eventually work their way into a bathmat, but it's still marinating as to how. I don't think this counts toward yarn buying, but I'm not certain, so to hedge my bets I'm giving Aija the chunky weight Wool-Ease I mentioned the other day. The next day we hit up my mom's LYS: 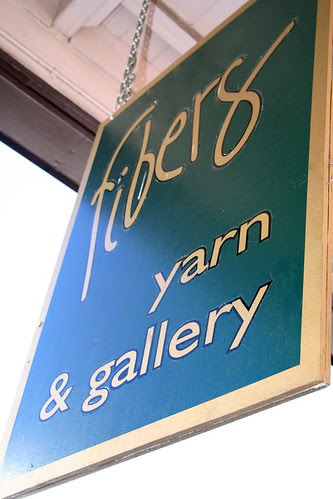 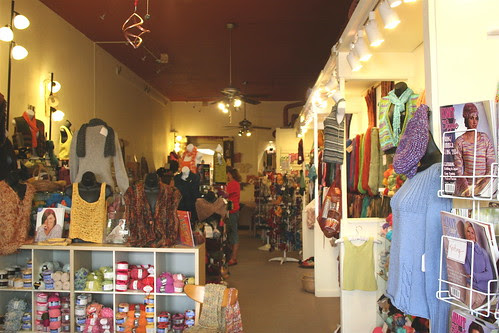 This is the place I bought the Silky Tweed for the ill-fated Tangled Yoke Cardi, and I was lucky enough to pick up the last two skeins of the dyelot I originally bought, along with 2 skeins of  deep chocolate brown. This definitely falls under project scope, as I now have 13 skeins of Silky Tweed with which to begin the Road to Avalon hoodie from the newest Knitscene (also in my possession). Shop owner Allison is a lovely woman. She's a bit brusque at first, but there is no malice or attitude behind it - that's simply how she is, and while I was a little put off by her abruptness originally, I value her opinion more every time I go to her store. Plus, she carries a variety of things that my LYS doesn't, so I can support two shops guilt-free. Anyway, Allison and I worked out a way to make sure I have complete control over the new sweater, but it will take some mathematical gymnastics to get there.
I have to pause here and head to work. This is my last week with Bella; her father has asked me to continue with her once/week, but I asked for some time with my new family to think about it and to get used to the new schedule. Given the amount of stress the Crazy Family puts on my life, I'm thinking I'll say no. Soon, I hope to be as relaxed as this fellow: 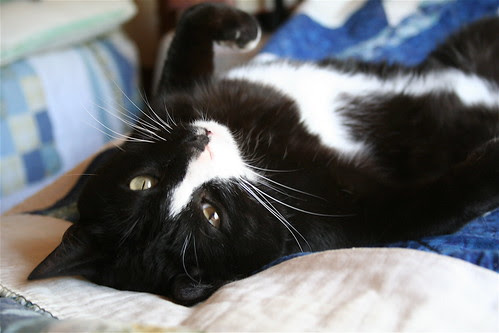 Posted by Anonymous at 4:33 PM