It's time. On Tuesday, I sent my resume to a local nanny agency after Bella's dad cut my hours again. He's so excited lately to have re-discovered how much he loves being a father, which I think is utterly wonderful, and I wish him the best of luck, but with summer coming on, 15 hours/week won't cut it. Especially if I want to do things like pay rent and pay off my car, not to mention going to SOAR or really anywhere ever. Yesterday I met with the nanny agency and the lovely lady there said she would begin sending my resume to families in her database, so I might hear something back as early as Monday.

I'm trying to get over my feelings of guilt about leaving Bella. We were just beginning to get used to each other and pound out a rough set of guidelines, and the drama was cooling down considerably (despite the occasional Bella Family Crazy Dance(TM)). I feel like a strange mix of mercenary and Mary Poppins - leaving because the money will be better elsewhere, and leaving because the family is beginning to heal. However, another position would probably suit me better and cause less stress in my life, not to mention that with gas at $4/gallon here, driving ~50 miles every day is getting damned expensive! 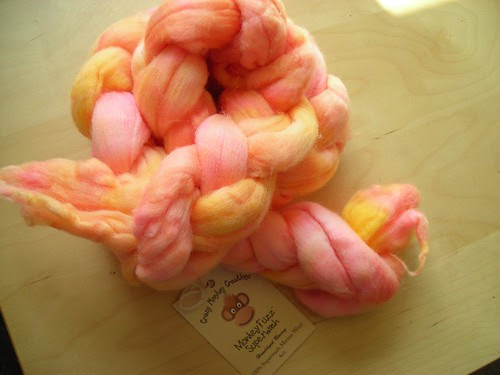 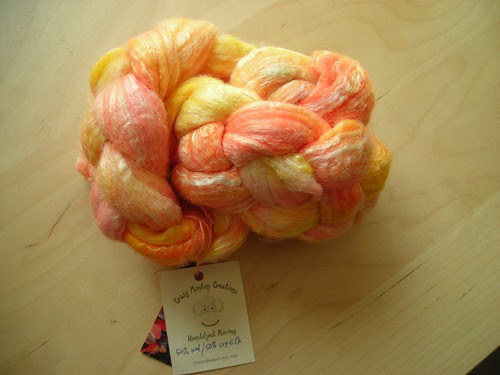 4 oz. merino/soysilk in Golden Summer
(These two are destined to be plied together and maybe form a Bee Fields Shawl) 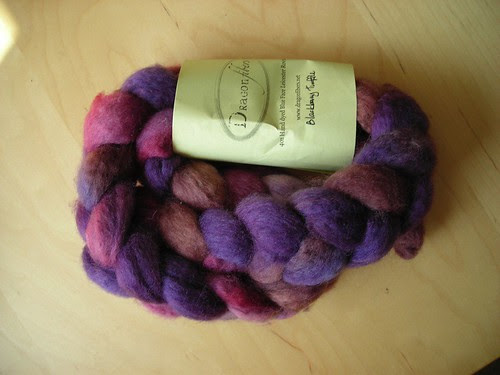 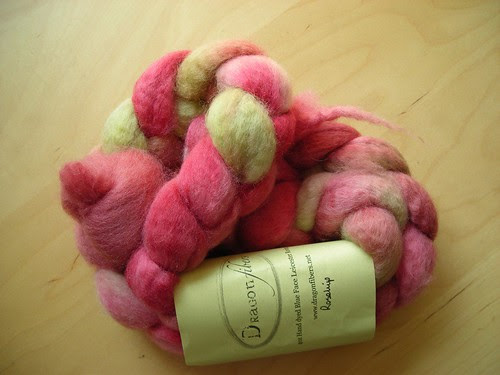 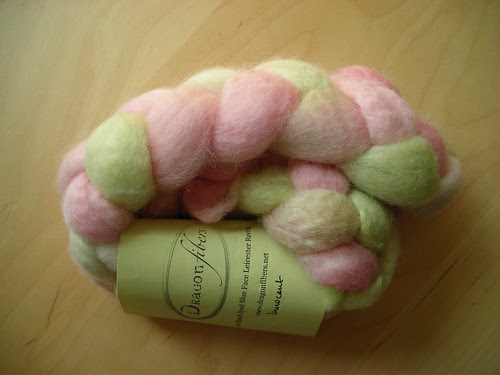 4 oz. BFL in Innocent
(The Rosehip and Innocent will also intertwine their as-yet-undetermined destinies)

I haven't bought anything since last week's fall from grace at the Fiber Festival; everything listed above was ordered before hand. You see, May is one of my 3-paycheck months, so I splurged in April (hey, any reason is better than none!). Yesterday I spent most of the day with Jasmin and Chloe just hanging out and watching Auntie Mame. Better Than Yarn tried out this fiber and wasn't feelin' it, so I became the beneficiary of Jasmin 2008's "Less is More" philosophy: 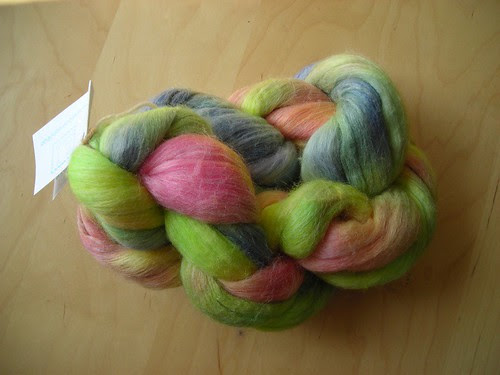 4.1 oz. merino/soysilk in Easter Egg from A Girl on the Rocks 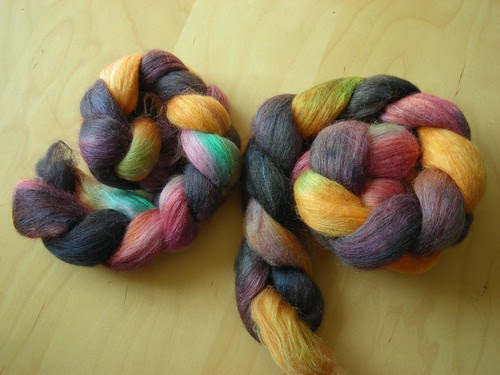 ~4 oz. merino/soysilk in Mystery Colorway from A Girl on the Rocks 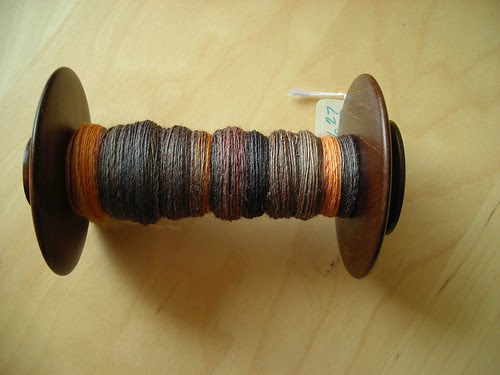 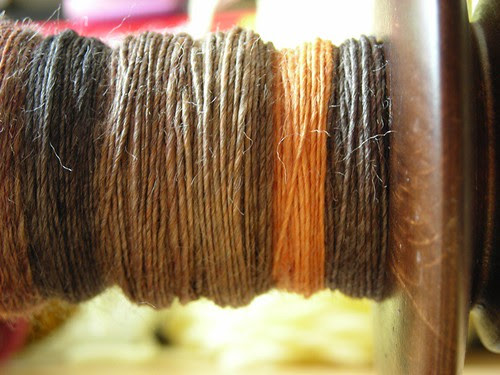 But before I began that new project, I finished one. See how I'm getting better? 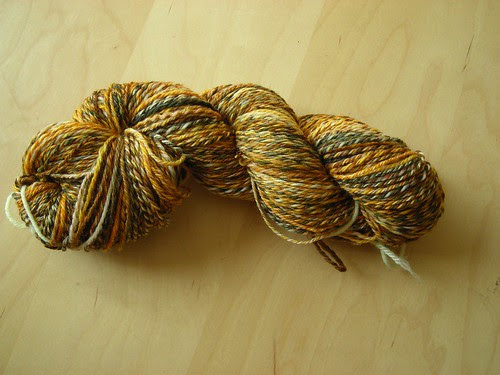 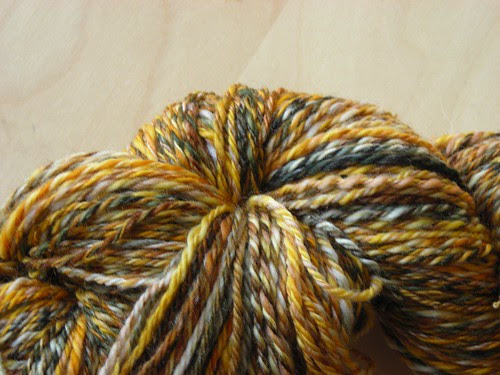 I'm quite proud of this spinning. It's the first 3-ply I've done that I could call a true sport/light worsted, which means that I could actually make a pair of socks out of this and have enough to graft the toes together. But maybe I'll do them toe-up just in case. It also puts me within spitting distance of completing Mile 3 of the 12-Mile Quest.

I haven't had many knitting finishes lately, so the yardage isn't adding up very quickly, but there are several things on the needles that are nearing completion. I've definitely been in more of a spinning place than a knitting place; the Tangled Yoke is still in the Time Out Corner, and the Stutter Regia and Wussy Wolverine socks are on hold as Public Knitting until the Juno Regina wedding shawl I'm working on is finished (June 13 deadline). Maybe things will pick up in the knitting department soon, but I think it'll be after the shawl is delivered and the two pairs of Stutter Socks are done. Deadline knitting is kind of the anathema of multiple-project progress.

I'm off to write papers - or maybe play video games. Here's a kitty. 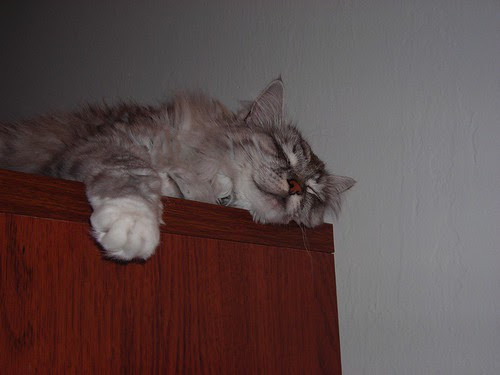 File Under: 12-Mile Quest, cats, nanny diaries, set those needles free, wool is not a drug, you spin me