Holy crap they're over and I've just now gathered up my strength to collect all the things that have happened recently into a cohesive post. Sigh. I'm thinking short on words and long on pictures will be the best route, so here we go.
1) I sent my HPSS3 package! And only 5 weeks late. Go me. 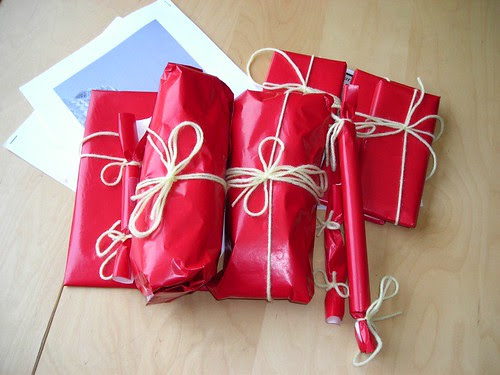 Cressida, I hope you like it! :D
2) I opened my HPSS3 package. The blasted thing has a been taunting me for a month (see #1), and it's fabulous. I adore everything in the box. Thank you, Auntie Enid! 3) I also got a package from Lady O, who is awesome.  I sent her some grey 4-ply soft that I bought to make Slytherin socks and never used, and in return she sent me this: 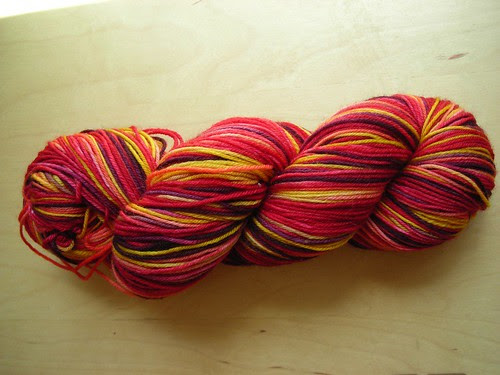 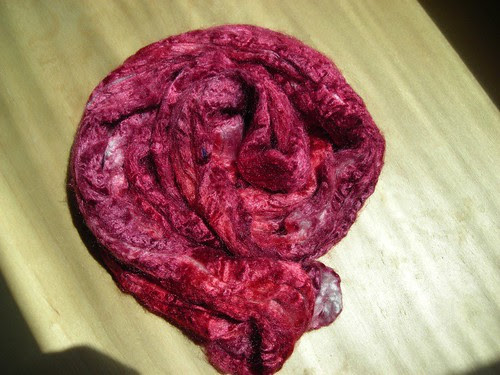 Handpainted tussah silk, 25g
Someone got the better end of this deal, and I'm not ashamed to say it was ME! Thanks, darlin'!
4) I finished the merino/soysilk from A Girl on the Rocks: 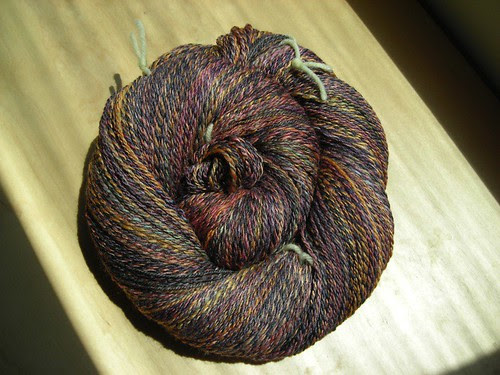 450 yds. 2-ply, fingering weight
Oh yes, it's shiny. It's been living next to my computer so I can love on it all  the time. It's put me over into Mile 4 of the 12-Mile Quest, so I'm nearly 1/2 way there! And the entire summer is stretching in front of me, so I have high hopes. Spinning-wise, I've moved on to the Easter Egg colorway in the same fiber (no pictures yet) for Jasmin 2008. Since she gave me the 2 bumps (the fiber wasn't really her thing, but I like it so I win), she's requested the one I'm currently working on for herself. She may have to wrestle me for it - if so, I'll sell tickets. There might be Jell-o.
However, it's been hard for me to keep working on said Easter Egg roving because this has showed up: 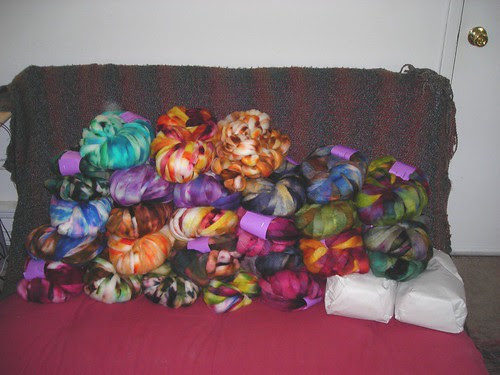 That would be TWENTY-SIX 8.5 oz. bumps of roving from Crown Mountain Farms, plus 2 pounds of undyed SW merino roving (in the paper packages). Between that and the Black Bunny Fiber Club 2, I'd say I spent my stimulus check appropriately, wouldn't you? And since it's not money that I was expecting, it doesn't count towards "spending," either. At least, that's what I'm telling myself.
In celebration of the fact that I might have just achieved SABLE, I've decided not to buy anything until at least the Wool Auction on August 17. I figure I have plenty of yarn/roving to keep me busy until then, so I'm stealing a page from Crazy Aunt Purl's book and will write down everything I desperately want between now and then, and revisit the list come August. I already have a salad spinner, but we'll see what I come up with. And pay off.
Posted by Anonymous at 4:30 PM

File Under: 12-Mile Quest, procrastination is tomorrow's spice-of-the-day, wool is not a drug