Last night I finished seaming the BabyBean's Boatneck Sweater! It's my first actual fitted garment project; socks and shawls and scarves (oh my!) don't really count as "fitted" in my estimation. I was thrilled and stunned that it worked out so well. I changed a couple of things in the pattern, but nothing major. I left both the front and back with looong tails on a Knit Picks Options cable so the last stitches would be live, then grafted the shoulders together and used a sewn bind-off across the neck. It worked quite well and helped cut down on the number of seams. 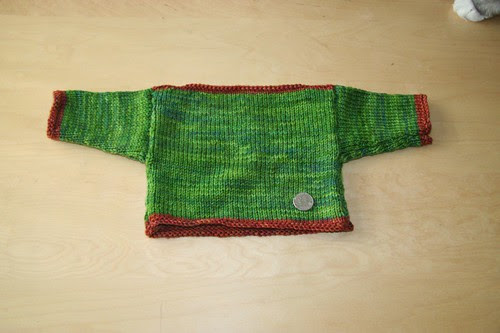 That's a quarter for scale - it's pretty tiny, so I'll have to get it to ButterBean quickly so that A) it still fits and B) it's still cool enough to wear in San Diego. The whole thing took about 170 yards total, which left me plenty of Classy for another couple of baby items. A cute matching hat, perhaps?

Then I picked up the leftover blue I dyed for my Egyptian Sock last spring and began a pair of the Seed Stitch shoes. See how well I'm keeping to the list? Enjoy it while it lasts, folks. 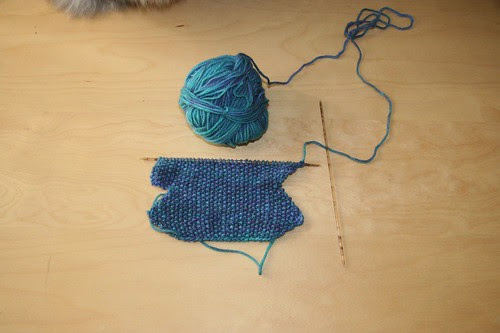 I know, they don't look like shoes, do they? But soon they will, or I'm hoping so; they at least look like the model in the book so far. I was totally enchanted with this pattern last night because apparently I like seed stitch. There are a few fun little tricks to this, like casting on 5 stitches cable-style at the end of a row to make a little flap. I've never knitted like this before, so it's kinda fun. Incidentally, the book for both of these patterns is Baby Knits for Beginners by the amazing Debbie Bliss. I would recommend it to anyone who wants to try some garment shaping without committing to a whole grown-up sized sweater. There are drop-shoulder and raglan sweaters, short row collars and even plackets in there, and all small enough that the project doesn't take 500 years. I may just work my way through it sweater-by-sweater.

And lastly, the What Socks To Cast On question has been answered! I know you all were on tenterhooks waiting to find out which sock I'd pick. I chose the Azure socks from Knitty, at which point I remembered that I'd never done toe-up socks before, and oh that cast on is new too. I think I ripped the toe of the sock about 4 times before it worked out. So after roughly 3 hours of knitting, I've got this much sock: 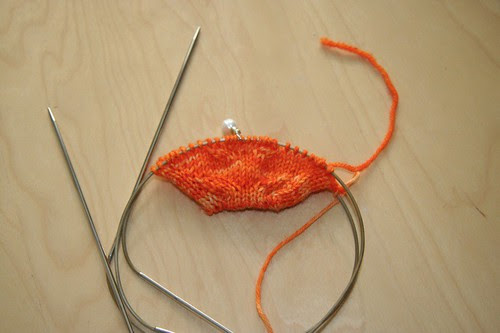 Mostly-correct Valencia Azure Sock
That's about 8 pattern rows in. It's slow going to say the least; the pattern isnt' very forgiving in terms of showing you where you messed up. But I'll get there, and in the mean time I'm enjoying knitting with a bright, happy yarn that still smells faintly of Orange Kool-Aid. And now I must take the new car to get an oil change and find out if there's a leak in the engine coolant tank or if it's just empty. Good thing there's a Starbucks nearby.
I finished Vallente's The Orphan's Tale: In the Night Garden last night. It's a stunning book, and there will be a review shortly. I'm working on it.
Posted by Anonymous at 10:32 AM