Well, I bound off my test knitting last night, which means Scarf Month only took an extra 15 days to arrive. I think that means I can safely extend Scarf Month into September; I'll probably need to in order to get all of my scarf UFO's taken care of. There are only 3, really - but they're all doozys.

First up is Faina, because the Mother Ship has been bothering me in an only half-joking tone .
Now, let me go back a couple of days:

Here's the haul my mom and I picked up from the lovely Fibers in Grass Valley.
And here is her portion:

The rest was mine. ::blush:: Isn't the tiny little iron just as twee as can be? It'll keep me from having to haul out the ironing board every time I want to press open a seam for the forth-coming sock project bags. Anyway, my mom let slip at the yarn store that she had forgotten what Faina even looked like, not to mention what color she chose for the yarn. WELL! Of course the Startitis virus that has been lying dormant in my brain began to twitch and awake. If she didn't remember, why on earth couldn't I start something else? No reason at all! To make it worse, when I got home my order from Knitpicks had arrived, including A Gathering of Lace and EZ's Knitting Workshop. ManCandy had to wrest me away from the Faux Russian Stole page in GoL, shouting what I've told him to say in situations like this: "NO! Don't give in! It's not you, it's the Startitis! Come back to me! Don't give in!" Sometimes it works, but he has to catch me early.

So I somewhat regretfully hauled out the original Faina: 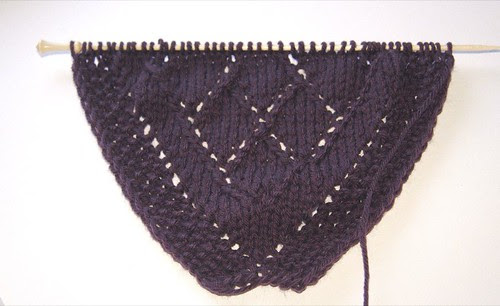 She's looking a bit neglected, isn't she?
Since I began this project, I have learned a whole lot about fiber and knitting and mysterious words like "drape" and "gauge" and "yarn weight." I knocked out about 1/2 of a row before I discovered that I missed a YO somewhere. Again, I contemplated ripping and starting the Faux Russian Stole, but I resisted mightily again - mostly because GoL was out in the living room and I was knitting in bed, and I knew that if I couldn't keep track of YO's in Faina, I certainly would muck up the FRS beyond recognition. Instead, I looked at the pattern again. The piece on the front of the pattern was knit in sport weight alpaca. I was knitting with worsted weight Cascade 220. Now, Cascade 220 is lovely, but it has no "drape" and is the wrong "gauge" not to mention "yarn weight." But damn if I didn't get the needle size right! No wonder it didn't look much like lace. I wracked my brain and remembered this little gem in my stash:

Knitpicks vs. Cascade! Yarn weight? Whazzat?
And here she is, re-fitted and I think much more suited to herself:

She still smells like Grape Kool-Aid. Yum.
Here's some kitty pr0n as well, since I've been seriously remiss with the cute kitty pictures lately.

Waffles and Pierre lounging at the Farm

Darcy checking out the bed A new sleeping spot!
Posted by Anonymous at 11:05 AM